European Parliament votes for big reductions in sugar in baby foods and prohibitions on labelling at too early  an age.

The European Parliament today voted today –  393 votes in favour, 305 votes against –  to reject draft EU rules on baby food, which would have allowed baby foods to contain high levels of sugar and products to be labelled for use from 4 months of age. The European Commission  (the EU’s civil service) now has to bring the regulations into line with the sugar recommendations from the World Health Organisation  (WHO) and the World Health Assembly’s requirement that baby foods are not marketed for use before 6 months of age (WHA) and resubmit them (1). CLICK HERE for the motion adopted.

Commenting after the vote, UK Green MEP  Keith Taylor, who was behind the motion to reject the rules and call for redrafting, said:

“The European Parliament has today voted to put the health of babies and children first. The health risks associated with excessive sugar consumption are now widely accepted…  The introduction of such high levels of sugar to foods – especially so early – is likely to contribute to the rising levels of childhood obesity and may affect the developing taste preferences of children.“

Patti Rundall, OBE, Policy Director of Baby Milk Action, IBFAN UK also commented:  “We are delighted with this vote. We’ve been calling on the EU Commission to do something about sugar levels since 2006  – when the EU and the US blocked a proposal from Thailand to reduce sugar levels in the Codex global standard on baby foods.  It is outrageous that no attention has been paid to this issue that has contributed so much to rising levels of obesity.

“On the labelling issue its worth remembering too that the 1994 World Health Assembly Resolution (WHA 47.5) called for appropriate complementary feeding of babies to be “fostered from the age of about six months.”    The baby food industry has fought this recommendation tooth and nail ever since, and has  targeted mothers with claims that their products are  the “ healthy choice.”  The 4-6 month window is worth more to companies than just the foods sold in that period.  Baby foods are the  fastest growing food and beverage segment  – growing 7.8% a year.

“The aim of companies is hook babies onto soft sugary products so that processed foods become the norm.   If you wait until the baby is developmentally ready – normally around 6 months – they  will reach out and join in with family foods that are much less processed   – and they will be all the healthier for it!   So this is certainly a very good day for child health and the decision will have resounding impact globally.”

Exclusive breastfeeding is recommended to six months and only infant formula is needed for this period if babies are not breastfed (see UK Start for Life Guide to Introducing Solid Foods). Too early promotion of complementary foods undermines this recommendation. A baby eating liquidised Grandpa’s Sunday Lunch from Cow & Gate (pictured below), for example, will be unable to discern the separate flavours and associate them with the colours, shapes and textures of natural foods. 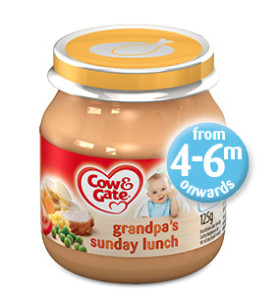 Sales Director of Cow and Gate/Milupa, Ian Thomas, explained  to the marketing press in 1997 how the company wants products to be displayed in retail outlets: ‘We suggest milk is merchandised on the left hand side of the fixture, followed closely by an early weaning block – jars and packet foods from 4 months – to stop mums drifting into home-made foods.’

Background to the Delegated Acts

As well as the new baby food regulations, the European Commission is also introducing new regulations of formulas. During the consultations on these laws, Baby Milk Action won some improvements, persuading the Commission, to introduce  new specific wording requiring all exports from the EU to be understandable and 3 extra paragraphs: about the International Code, risks of advertising and links to concerns about obesity. These changes should help Member States take the necessary  action national level. We also got the language toughened up to make it  clearer that infant formula branding and package text, images and colours should be clearly distinct from those used on follow-on formula and Formulas for Special Medical Purposes.
Keith Taylor tabled motions to bring the formula regulations closer into line with World Health Assembly measures by prohibiting advertising of specialised formulas and follow-on formulas, but these did not pass.

(2) The delegated regulation proposed by the European Commission would have allowed baby foods to provide 30% of their energy from sugar (7.5g sugar/100kcal, which is equivalent to 30kcal from sugar in 100kcal energy). The WHO recommends 5% as a health level http://www.who.int/mediacentre/factsheets/fs394/en/.

The European Parliament’s vote means the regulation is rejected and includes the following  key recommendations:

FULL TEXT of the Resolution that was passed today.

Para 2:Considers that the delegated regulation does not contain sufficient measures to protect infants and young children against obesity and that the allowed maximum sugar level should be substantially lowered in line with WHO recommendations;

Para 7: Calls on the Commission to bring forward a new delegated act that takes into consideration the findings of EFSA’s review of the compositional requirements of processed cereal-based food, and scientific evidence on the effects of added sugar and the early introduction of processed foods in relation to optimal infant and young child feeding recommendations;

Para 4 …labelling and marketing of processed baby foods should make it clear that these products are not adequate for use by infants of less than six months of age and should not undermine the six-month exclusive breastfeeding recommendation; considers, therefore, that the labelling and marketing should be revised in line with WHA recommendations for foods for infants and young children;

Only infant formula is needed for the first 6 months if not breastfeeding (see UK Start for Life Guide to Introducing Solid Foods).

In a plenary vote today Members of European Parliament (MEPs) called for a rethink of rules that could allow up to 30% sugar content in cereal-based baby foods, which could bring the draft legislation back to the drawing board.

The article quotes industry nutrition lobby group Specialised Nutrition Europe (SNE) as saying it “deeply regretted” the result of the vote:  “This draft regulation would have completed a legal framework ensuring a high level of food safety and guaranteeing strong consumer protection for infants and young children..”

5 thoughts on “European Parliament votes for big reductions in sugar in baby foods and prohibitions on labelling at too early an age.”