The industry-funded UK Advertising Standards Authority (ASA) is holding an event today to celebrate its 50 years of ensuring advertising is “legal, decent, honest and truthful”.

Baby Milk Action is launching a new report on its experiences reporting baby milk advertising that shows this slogan does not stand up. Click here to download. 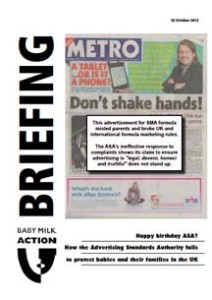 The advertisement for SMA formula shown on the front cover of the briefing was reported to the ASA.

The ASA upheld two of the complaints about the advertisement.

•No correction was required.

•No fines were levied.

•The papers that ran the advertisement did not report on the ruling.

•The advertiser did not apologise; in a statement it said it was “disappointed”.

This state of affairs is actually better than usual: the ASA refuses to even investigate many of the complaints about baby milk advertisements registered with it.

Happy birthday ASA? Health advocates who call on it to deliver on its claim to ensure advertising is “legal, decent, honest and truthful” have little to celebrate.

Meanwhile, as the ASA cracks open the champagne, in Brazil newspaper headlines are alerting consumers that leading television manufacturers have been fined £1.5 million by the Department for Consumer Protection in the Ministry of Justice for misleading advertising.

Baby Milk Action argues it is time for the UK Government to act on the repeated calls from the UN Committee on the Rights of the Child and act to stop baby milk companies breaking marketing rules.