Following complaints by Baby Milk Action and other groups and individuals, the Advertising Standards Authority (ASA) has ruled the answer is NOT SMA formula.

The ruling vindicates Baby Milk Action’s successful “Stop Wyeth” campaign against Wyeth’s SMA Baby Know How roadshow, which was to promote SMA formula in shopping centres in June and July 2012.

Wyeth continues to promote its formula to health workers with the claim “Drop for drop, no other formula comes close” safe in the knowledge that the ASA refuses to investigate advertising in health journals (see below).

Baby Milk Action is a not-for-profit organisation that monitors the baby food industry. It is highlighting that such misleading advertising is designed to inflate prices and is ultimately funded by a premium on the price of formula.

“The ASA ruling shows that SMA formula is NOT the best milk after Kate’s. This ruling comes after the damage has already been done and without fines won’t deter future malpractice, but it does prove the point that Pfizer/Wyeth’s national advertising campaign misled parents. The company’s aim is to inflate prices. Parents who buy formula already pay a premium to cover these expensive marketing campaigns. All formulas have to comply with legal composition requirements.

“These misleading promotions should not be allowed to even get off the ground. We are receiving widespread support for our ‘no promotion, cheaper formula’ petition campaign.”

The “no promotion, cheaper formula” petition campaign on Change.org is backed by Mumsnet and mother support groups. It can be signed at:

Based on figures from dairy farmers, Baby Milk Action has calculated that between 50% and 80% of the selling price of formula goes to promotional budgets and company profits. This means a family feeding a child with formula for 12 months will pay between £300 and £800 towards company promotion and profits, depending on whether they use powdered formula or more expensive ready-to-feed – click here.

Wyeth advertising to health workers makes similar claims to those the ASA has ruled against today, but the ASA refuses to take action over advertising directed at health professionals (example below from Community Practitioner, July 2012). The same journal also contained advertisements from Danone claiming Aptamil is the best formula and from Hipp claiming its formula is the best – click here. 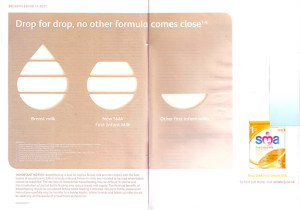 Baby Milk Action has also won a case at the ASA in 2009 against an advertising campaing that claimed Aptamil is the “best follow-on formula”. By law, all formula has to comply with composition standards and there is no scientific or medical reason for parents and carers of healthy babies to choose one formula over another, other than price and the preference of their child. Follow-on formulas themselves are “not necessary” according to the World Health Assembly (made up of the world’s health ministries) as infant formula can be used until 12 months when babies are not breastfed.

“Parents and carers planning to use formula have a right to accurate information from independent sources. Health professional bodies, mother support groups, the UN, Trading Standards and even the government’s own advisors have called repeatedly for politicians to introduce an outright ban on formula promotion as in many other countries, but have been ignored. International minimum standards prohibit all promotion, but companies ignore these measures unless legislation is put in place or we and our partners shame them into changing.”

Baby Milk Action has also exposed Wyeth advertising its SMA formula on the bedside television screens in hospital wards (image below). These screens are provided by private companies and sometimes hospital authorities were unaware that formula was being advertised to pregnant women and those who had just given birth. See the report on the Baby Feeding Law Group (BFLG) website. BFLG is a coalition of UK health professional and mother support groups. Baby Milk Action coordinates the BFLG monitoring project.

The ASA rejected complaints that the advertising promoted the SMA brand used for the entire range of formula, including infant formula. It is illegal to advertise infant formula in the UK. The ASA explanation includes: “we considered that the ads included a clear and prominent pack shot showing the product that was being promoted”.

However, the Guidance Notes that show how the Infant Formula and Follow-on Formula Regulations (2007)should be interpreted state: “51. the specific terms ‘infant formula’ and ‘follow-on formula’ should be clearly featured on the packaging, in a font size no smaller than the brand name.”

The “follow-on” formula text on the pack shot is 20% the size of the brand name and so cannot said to be “clear”. This is not mentioned in the ruling even though Baby Milk Action understands the Department of Health also brought the labelling requirements to the attention of the ASA.