The WHO European Region: protecting the most vulnerable

Coinciding with the launch of the new WHO–UNICEF global report:  “How marketing of formula milk influences our decisions on infant feeding” IBFAN welcomes this an important new Policy Brief produced by the WHO Regional Office for Europe. The Policy Brief includes a “model law”,  developed specifically for the Region,  to demonstrate what effective regulations should look like.

The aggressive formula milk marketing is especially worrying for the WHO European Region. Of all the WHO regions, it has the lowest levels of exclusive breastfeeding for children. The new WHO data show that 84% of pregnant and postpartum women in the United Kingdom are exposed to formula milk marketing. 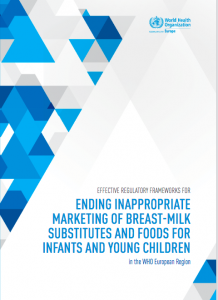 ABSTRACTThis Policy Brief is intended to guide Member States in the WHO European Region as they embark on the vital task of safeguarding parents and caregivers from all forms of promotion of breastmilk substitutes (BMS) and the inappropriate promotion of foods for infants and young children (FIYC). Such promotion undermines optimal infant and young child feeding practices, including breastfeeding and safe and appropriate complementary feeding, placing a child’s survival, growth and development at risk. It can also contribute to the growing public health problem of childhood overweight and obesity, which can lead not only to premature mortality from non-communicable diseases (NCDs), but also to adverse health outcomes throughout life. In Eastern Europe and Central Asia, the number of children under five with overweight has increased from 1.6 million in 2000 to 4.5 million in 2016. United Nations human rights experts have reminded States of their obligations under human rights treaties to “take all necessary measures to protect, promote, and support breastfeeding, and end the inappropriate promotion of breast-milk substitutes and other foods intended for infants and young children up to the age of 3 years”.The International Code of Marketing of Breastmilk Substitutes and subsequent Resolutions by the World Health Assembly, along with the 2016 WHO Guidance on ending the inappropriate promotion of foods for infants and young children provide the regulatory framework to put an end to unethical marketing practices. This policy brief provides step-by-step guidance on how to review the current level of national implementation of these instruments and then proceed to strengthen measures and establish effective systems for implementation and enforcement. This includes the use of a “model law” developed specifically for the Region to demonstrate what effective regulations should look like.