The US  Government endorsement of artificial feeding has been and continues to be a huge financial benefit to the US formula industries. The US policy has left citizens without Code regulation, baby friendly support and mandatory maternity leave for decades.  The blame for formula shortage and the current desperation of mothers must be put squarely on the policy makers, the regulators and the industry with their heavy lobbying to deregulate and sabotage breastfeeding and all parents rights to protection.

For updated IBFAN briefings on this recall visit the contaminants page on the  IBFAN GIFA website.

Formula shortage in the USA: https://youtu.be/SIGvs7avNYA 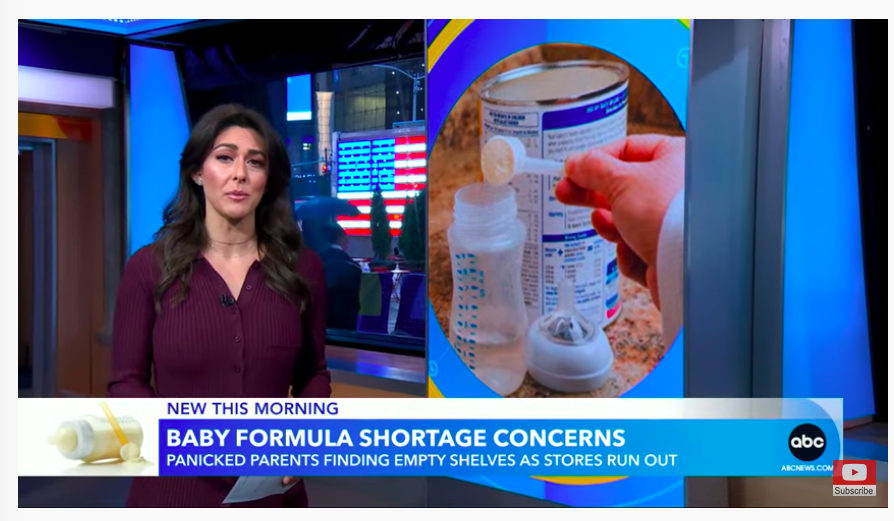 ‘I almost lost my baby’: Parents demand answers from FDA

Two weeks after a nationwide recall of infant formula tied to five hospitalizations and two deaths, the FDA is refusing to answer questions about why it took months to take action, while parents, lawmakers and advocates ratchet up pressure on the agency. As POLITICO recently reported, the FDA, CDC and formula maker Abbott Nutrition knew about the first infant seriously sickened by Cronobacter sakazakii, a rare bacteria, in September. It was more than four months before FDA sent inspectors to investigate the plant where the formula was made. It took another three weeks to order a recall. The timeline has raised questions about the government’s response and whether quicker action could have prevented illnesses and deaths. POLITICO has repeatedly asked the FDA to explain why there was a monthslong lag between illnesses being reported, an inspection and then ultimately pulling products off the market. The agency has repeatedly declined to do so.

Three products (Similac, Alimentum and EleCare) recalled by Abbott in February 2022 have caused an outbreak of serious infections in the US, with at least four children hospitalised. Three of the infections are due to Cronobacter sakazakii (formerly Enterobacter sakazakii) and one is due to Salmonella. Two deaths are under investigation by the US authorities.

Three of the babies were sick with Cronobacter sakazakii and one had Salmonella Newport, the FDA said.

Cronobacter bacteria can cause severe, life-threatening sepsis infections or meningitis while salmonella can cause gastrointestinal illness and fever, according to the FDA.

“We deeply regret the concern and inconvenience this situation will cause parents, caregivers and health care professionals,” Joe Manning, Abbott executive vice president, nutritional products, said in a statement.

The FDA said it initiated an onsite inspection at the facility and findings to date include several positive “Cronobacter sakazakii results.”

“As this is a product used as the sole source of nutrition for many of our nation’s newborns and infants, the FDA is deeply concerned about these reports of bacterial infections,” said Frank Yiannas, FDA Deputy Commissioner for Food Policy and Response, in a statement.

Food Safety in the archives

With recent worries about the possibility of contamination from nuclear power stations in Ukraine, there will inevitably be concerns about safety of breastmilk and baby foods  and we are hoping that WHO,  UNICEF,  the Infant feeding in Emergencies and health authorities will be able to provide guidance.

Over the years IBFAN has followed this issue closely. IBFAN GIFA website.

Here is a page from a 1988 Baby Milk Action newsletter following the Chernobyl disaster in 1986.  At the time we worked closely with an investigated journalist, Felicity Arbuthnot, who was tracking the  dumping of contaminated products. 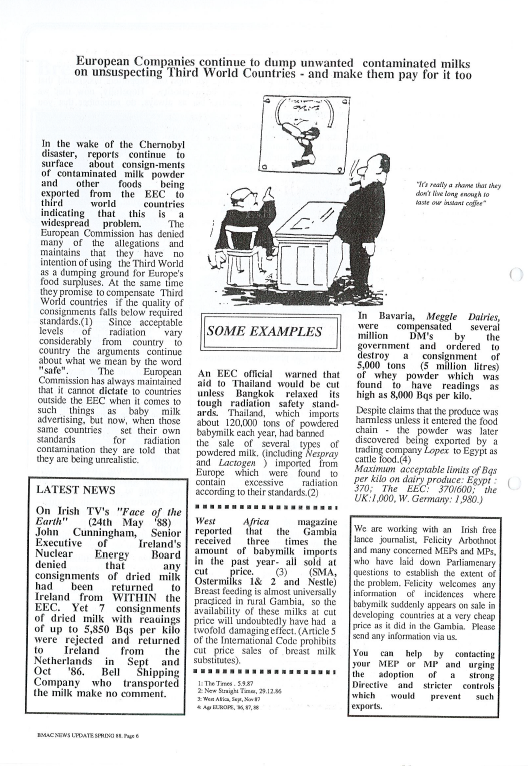