Nestlé and Danone in fierce competition 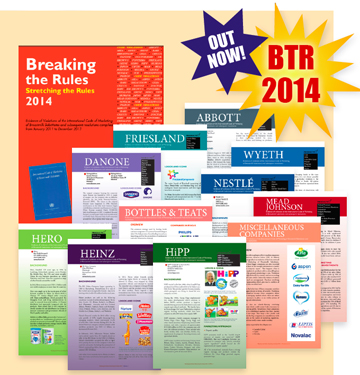 BTR 2014 is the result of three years of collective voluntary effort to compile evidence on marketing practices by baby food companies around the world. The final report contains 813 entries from 81 countries and covers 27 companies.

Competition has increased and breastfeeding declines as a result. The market is so profitable that further acquisitions have led to more concentration, leaving two global leaders in fierce competition: Nestlé and Danone. Smaller companies are just as aggressive and the lucrative Chinese market is attracting new export investments from Canada and Ireland.

Most baby milk companies are targeting China‘s lucrative USD 12.4 billion infant formula market. Potential consumption is projected to hit USD 25 billion by 2017. Companies battle to corner market share (over 20 million babies born each year) and as demand exceeds supply for imported products, prices are jacked up. The escalating price of infant formula sparked an investigation by the competition authority, the Chinese National Development and Reform Commission (NDRC). In 2013, six companies were fined USD 108 million for price-fixing. Five of them are in this report: Mead-Johnson, Abbott, Dumex, Friesland and Fonterra. Both Wyeth and Dumex immediately cut their formula prices by 11 to 20%.

● The New Jewel in the Crown

Growing-up milks (GUMs). Baby food companies maintain GUMs are not covered by the Code but the scope of the Code is clearly wide enough to include them.

GUMs or fortified ‘Toddler milks’ are used by many companies to cross-promote infant formulas and follow-up milks. Aggressive marketing has made this the best-performing segment within the overall market. GUMs lead the growth of the baby food market, approaching a value sales gain of 17% in 2012, followed by 12% for follow-up milks. Toddler milk now accounts for one-third of the global milk formula market by value.

Thanks to the internet and social media, evidence of companies blatantly giving sponsorship to health professionals are now more visible in the public domain. In the past, the information regarding such practice was often heard of but seldom seen; in this day and age, photos are uploaded on social media for all to see. Doctors, nurses, midwives, nutritionists are the most targeted groups with air tickets and expenses for expensive conferences, gifts including top of the line laptops, lucky draws and the like. We report with photo evidence from unexpected corners like United Arab Emirates, Turkey and Iraq.

● If you cannot beat them, join them!

Infant formula makers have always marketed their products with messages that suggest that their products are nearly as good as breastmilk and some even giving the impression their formulas are better than breastmilk. The common trend is to say that the particular formula is ‘closer than ever to breastmilk’ or ‘inspired by breastmilk’.

Wyeth, now owned by Nestlé, started a new product line called Illuma, a ‘human affinity formula’. Product promotion praises the virtues of breastmilk and then carries on with a story about how they have spent years on research and ‘learned from the breast’ to find a concoction that includes a few nutrients also present in breastmilk.

The 1,000 days between a woman’s pregnancy and her child’s 2nd birthday is a critical period for long term development. UNICEF and WHO have launched a global campaign for health and development through adequate nutrition during the critical ‘1000 days window of opportunity’.

Several baby food companies saw a golden marketing opportunity in this campaign (as shown below). They could join in the chorus and yet skew it into a promotion opportunity for their products. 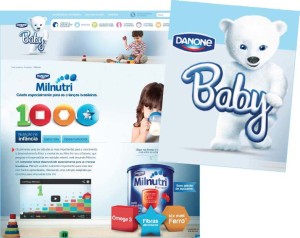 In their pursuit to increase sales, formula companies have recently become bolder by suggesting to mothers that they can do both – formula feed and breastfeed at the same time.

The Global Trends in Exclusive Breastfeeding rates (UNICEF 2012) are on the rise, but the proportion of exclusively breastfeeding mothers in East Asia fell from 45% in 2006 to 29% in 2012. In Indonesia the figures are 10% down. In the Philippines only 17% are now breastfeeding.

● Download the full Executive Summary for free along with Legal Updates.

Order the Breaking the Rules at http://www.ibfan-icdc.org/

Who is the worst? 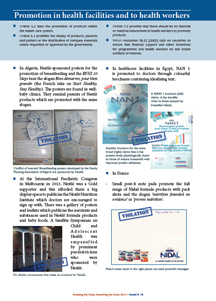 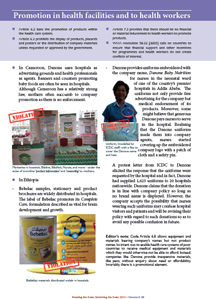 Baby milk action has put four-point plans to executives of both Nestlé and Danone, calling on them to market their products responsibly – but the evidence shows that it takes laws and public pressure to force changes.

● Watch out for the DanoNO campaign alongside the Nestlé boycott (pg 12).