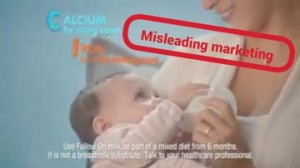 A television advertisement for Danone’s Cow & Gate follow-on milk was banned by the UK Advertising Standards Authority (ASA) in January 2014 as it misled viewers.

Such advertisements should not appear at all under international rules, but as these have not been implemented in the UK, we made use of the ASA system. We asked if the claims made in the advert had been approved by the European Food Safety Authority (EFSA) as required in the EU.

The ASA found that Danone had gone too far with its claims that ‘Cow & Gate follow-on milk provides Calcium for strong bones’, and ‘Cow & Gate follow-on milk provides … iron for brain development’. Its ruling (A13-234819) states: ‘consumers would not understand the adapted wording used in the ad to have the same meaning as the authorised wording.’

Our comments on the ruling were reported on the UK’s most visited news website, the Daily Mail (with a shorter article in the print edition):

Advertisements such as Danone’s suggest that follow-on milks provide health benefits, but they are unnecessary products and Danone is simply ripping parents off, using false claims to make them think they need these milks. Yes, calcium is needed for normal growth and bone development in children and iron contributes to normal cognitive development, but these are provided by a normal diet and Danone’s products offer nothing special other than a way for the company to fill its pockets. The cost of these multi-million pound advertising campaigns goes onto the price of the milks making them even more expensive.

The article also reported our concerns that the ASA decision would have little impact:

We have won repeated cases proving that claims made for baby formula do not stand up to scrutiny, but the firms continue using them regardless because the ASA is a toothless body requiring no corrections and levying no fines.

Many of these practices also break the law in our view, but Trading Standards and the Department of Health are failing to hold companies to account. Companies should be prosecuted and fined for repeated violations.