Last year, Baby Milk Action published the report Look What They’re Doing in the UK – 2013 showing how baby milk companies are breaking marketing rules in the UK. These are the Infant Formula and Follow-on Formula Regulations (2007) and the associated Guidance Notes.

Danone responded to our report by saying, ‘we do not accept the Guidance Notes have the ability to “control” or “prohibit” certain practices.’

Danone dismisses the Guidance Notes because they say things like follow-on formula advertising must not: ‘promote a range of formula products by making the brand the focus of the advert, rather than specific products (e.g. where specific products are mentioned only in a footnote or in a picture of a tin of formula within the advertisement).’

This is exactly what Danone did with its Cow & Gate advertisement on page 10. It showed a pack shot of follow-on milk, with a label virtually identical to that on the infant formula in the range. 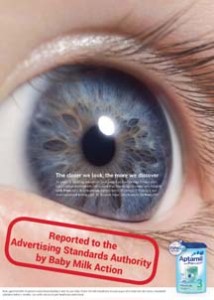 Danone is using the same strategy with its latest Aptamil Pronutra advertising. It also breaks the rule for labels. The Guidance Notes state: ‘the specific terms “infant formula” and “follow-on formula” should be clearly featured on the packaging, in a font size no smaller than the brand name.’ [Emphasis added.]

Look at the advertisements – these terms are lost alongside the branding.

The theme of Danone’s latest mass media formula advertising campaign is ‘The closer we look the more we discover.’

It says that it has spent ’30 years studying breastmilk’ and has produced its ‘most advanced formula yet.’

It highlights the supposed benefits of ingredients for visual, brain and bone development.

Danone encourages people to search for information on Aptamil Pronutra on the Internet, which takes them to a website promoting the full range of formulas.

The Guidance Notes state, ‘In order to achieve compliance, companies will therefore need to ensure that formula advertising does not: focus primarily on the promotion of ingredients, or the effect of ingredients, which are common to both follow-on formula and infant formula.’

The Guidance Notes were introduced by the Food Standards Agency in 2008 following widespread consultation on interpreting the law, including with the baby food industry. They became the responsibility of the Department of Health (DH) on 1 October 2010 with the change in the UK Government.

The DH is also responsible for authorising – or not – company materials for distribution in the health care system.

At the same time, however, DH promotes the Change4Life health promotion campaign. Corporate partners? Danone and Nestlé. Over 2,000 people have signed our petition on Change.org calling for an end to this unacceptable conflict of interest.