EFSA research renews calls for a ban on claims 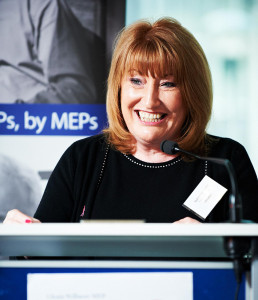 The European Food Safety Authority (EFSA)1 published the preliminary work it will use for its forthcoming evaluation of essential formula ingredients. The review is part of the ongoing overhaul of all EU baby food legislation.

The findings have prompted renewed calls from socialist MEP Glenis Willmott (above) to ban health and nutrition claims on follow-on formulas. An extensive literature review found no scientific evidence, or insufficient evidence, to support the inclusion of many of the ingredients commonly used in formulas.

‘If there are no scientifically proven benefits then we should not be allowing advertising of follow-on formula and we certainly should not allow companies to use health claims which guilt trip parents into buying more expensive formula unnecessarily.’

In 2011 Ms Willmott led the call in the European Parliament to veto a claim that DHA improved eyesight:

Whilst I received the support of a majority of MEPs, it was not enough to stop them going ahead. With EFSA’s evidence now agreeing there is no benefit, the Commission must urgently revise its approach.

Together with the Baby Feeding Law Group we have been calling for an end to ‘optional ingredients’ because they open the door for claims that are both misleading and highly promotional, incorrectly suggesting that a formula could be better than breastfeeding. If an ingredient is essential it should be in all formulas.

The Commission is holding regular meetings with Member States to discuss the legislation. Under the new rules MEPs can attend as observers. EFSA will publish its final opinion in April and will hold a open consultation in June.

The External report for EFSA:

● Assessed research as being moderately biased if fully or partially funded by industry, and severely biased if it had epidemiological flaws.

It concluded that there was:

● No evidence of any beneficial effect for different amounts of protein, DHA/ARA, prebiotics, probiotics, cholesterol, palm oil, selenium or nucleotides;

● No evidence of serious, general or specific nutrient deficiency in Europe;

● No need for general supplementation of iron, iodine, selenium etc;

● No evidence that formulae enriched with these nutrients would have any effect, except maybe in vulnerable subgroups.

We find the case for labelling infant formula or follow on formula with health or nutrition claims entirely unsupportable. If an ingredient is unequivocally beneficial as demonstrated by independent review of scientific data it would be unethical to withhold it for commercial reasons. Rather it should be made a required ingredient of infant formula in order to reduce existing risks associated with artificial feeding.

1. Preparatory work for the evaluation of the essential composition of infant and follow-on formulae and growing-up milk.  http://www.efsa.europa.eu/en/supporting/pub/551e.htm