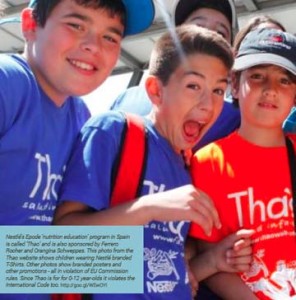 Above: Nestlé’s Epode ‘nutrition education’ program in Spain is called ‘Thao’ and is also sponsored by Ferrero Rocher and Orangina Schweppes. This photo from the Thao website shows children wearing Nestlé branded T-Shirts. Other photos show branded posters and other promotions – all in violation of EU Commission rules. Since Thao is for for 0-12 year-olds it violates the International Code too. http://goo.gl/WEwOYl

Member States of the European Union have passed an important Action Plan that for the first time calls for an end to food and drink sponsorship in schools. Since 1992 Nestlé has been sponsoring nutrition education programs in schools all over the world. Together with other NGOs, we have been calling for an end to such promotion which blurs the boundaries between education and marketing and sends a confusing message to children. It builds ‘trust’ in companies and diverts attention away from irresponsible marketing. Nestlé has admitted that a key purpose of these activities is to improve the company’s reputation and that it uses its Nestlé branding to ‘legitimately communicate its social responsible intentions to adults.’  The European Commission has confirmed that such activities should not be branded either with product names or with company brand names. The only promotion allowed is in Corporate Social Responsibility reports. The Member States Action Plan goes further calling for no sponsorship by food and drink companies in schools (pg 7).