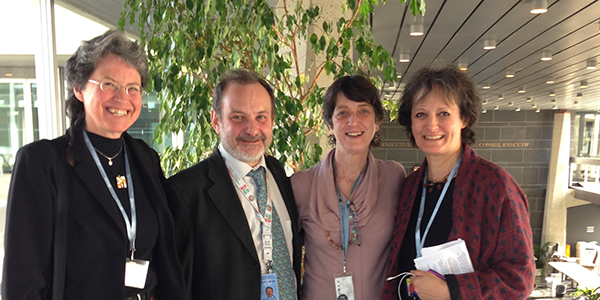 From the left above: Lida Lhotska, IBFAN regional Coordinator for Europe, Dr Francesco Branca, Director of WHO’s Dept for Nutrition, Dr Elizabeth Mason, Director, WHO Dept for Maternal, Newborn, Child and Adolescent Health and Patti Rundall, Baby Milk Action, IBFAN Co-Chair. Dr Branca said ‘We have been allied with IBFAN for many years and we now look forward to strengthening WHO’s commitment on the goal of increasing exclusive breastfeeding, and scaling up implementation of the International Code.’

The International Special Dietary Foods Industries (ISDI representing the feeding industry) lost its NGO status with WHO after 28 years, because WHO had not ‘received the deliverables expected during the collaboration period.’

ISDI and several other business front groups have enjoyed Official Relations status with WHO, even though this conflicts with current policy. This was due to inadequate implementation of WHO’s policy that defines NGOs as groups ‘free from concerns that are primarily of a commercial or profit-making nature.’ Unfortunately the ‘not-for profit’ legal status that many business groupings are registered under have managed to achieve has been mixed us with the ‘not working in the interest of profit-making’ status.

NGOs in Official Relations with WHO can make interventions at the meetings of WHO’s governing bodies, so influencing the formation of WHO’s health policies. The status also requires them to work directly with WHO on joint plans. This gives the impression that their main purpose is to protect and promote public health. Such misnomers play into the key corporate strategy  to ‘manipulate public opinion to gain the appearance  of respectability.’

IBFAN’s non-hierarchical network structure has not fitted easily into WHO’s format so for the last 30 years we have attended WHO meetings wearing the hats of Consumers International or NGOs such as Save the Children. As WHO is reviewing its relations with NGOs, with one aim being to improve its relations, we decided to apply this year and succeeded – without  changing our structure.

Our pleasure at this news and the refusal of ISDI was counterbalanced by the worrying news that the Global Alliance for Improved Nutrition (GAIN) succeeded in its application for NGO Official Relations. GAIN was unsuccessful last year because of several concerns, including its lobbying activities against a strong Code-related Law in Kenya in 2012. Member States asked GAIN to provide more information about ‘the nature and extent of the Alliance’s link with the global food industry’ and ‘the position of the Alliance with regard to its support and advocacy of WHO’s nutrition policies, including infant feeding and marketing of complementary food.’

GAIN is a public-private hybrid entity with assets of USD 61 million (mainly from the Gates Foundation) that boasts of its work with 600 companies – many of which were members of it Business Alliance. It has major several businesses on its Board and its commercial purpose to: ‘reach 1.5 billion people with fortified foods…’ has been a major obstacle to our work on global trading standards at Codex (see pg 31) and at national level.

To increase its chances of success this time GAIN said that it had, once month earlier, closed down its Business Alliance and that its ‘main links with the private sector were with national and local companies.’  In fact the Business Alliance had simply been ‘folded into’  the Scaling Up Nutrition Business Network (SBN) that was relaunched with 40 global companies at the Davos World Economic Forum in January 2014.

As we reported in Update 45, Kenya resisted GAIN’s pressure and adopted its strong law. It is now confining GAIN to working on food fortification for the general population and we are told that GAIN is keeping to its assigned role.

Since both GAIN and SUN encourage dealing with food and nutrition via Public Private Partnerships and Multi-Stakeholder Platforms, and GAIN is a major partner of SUN, it is hard to know if there has been a real long-lasting transformation in GAIN.One thing is sure – both SUN and GAIN must clean up their governing bodies and address conflicts of interest properly (see pg 16).

WHO’s decision to include GAIN as an NGO illustrates that WHO’s safeguards against conflicts of interest are not yet in place. A fact acknowledged by Dr Chan, WHO’s Director General at the WHO Executive Board meeting in January:

‘Yes, at this point in time we don’t yet have clarity on BINGOs1 [Business Interest NGOs] and PINGOs [Public Interest NGOs] but I did say that we’ll move towards that…  We need to make sure there is no influence in the policy space that is countries’ prerogative, or in the technical standard setting space which is the second space. I call it the Red Lines. Two Red Lines. No industry. No Business Interest organisation or any organisations who want to influence the work of WHO to their benefit should be allowed in those two spaces.’

If WHO is to stay true to its constitutional mandate and protect its independence, integrity and trustworthiness it is vital that it recognizes the fundamentally different nature of public-interest actors (who are guided by a public-health mission) and private commercial entities who come in all different forms but are guided by a market profit-making logic. These entities form the greatest risk to WHO. Such a distinction is politically indispensable in today’s world, where commercial influence is so often hidden.

We hope that Dr Chan keeps her word and develops distinct policies that will keep the NGO ‘space’ for those whose only mission is public health.

What is a Conflict of Interest?

‘[Individual] conflicts of interest are defined as circumstances that create a risk that professional judgments or actions regarding a primary interest will be unduly influenced by a secondary interest.’1

‘Institutional conflicts of interest arise when an institution’s own financial interest or those of its senior officials pose risks of undue influence on decisions involving the institution’s primary interests.’ 2

WHO: groups that are ‘free from concerns that are primarily of a commercial or profit-making nature.’ 3

What is a Non State Actor?

WHO uses the term ‘Non State Actor’ (NSA).We suggest NSAs are categorised as:

● Commercial entities and their front bodies

3  Criteria for the admission of NGOs into official relations with WHO, WHO Basic Documents, 47th edition, 2009