The baby milk industry has a cunning plan to boost profits and bypass restrictions on how it markets infant formula. We are seeing products for older babies with the same branding as the infant formula being marketed in the UK and around the world. Follow-on milks are marketed for use from 6 months and so-called Growing-Up Milks (GUMs) for children from one-year old.

The World Health Assembly said follow-on milks are unnecessary when they were first introduced – infant formula can be used if babies are not breastfed.

The UK consumer organisation Which? has highlighted the high sugar levels and said ‘Parents could save more than £500 a year by giving their child cow’s milk instead of toddler milk.’ See the Which? report.

Danone recruited the charity Tommy’s to promote GUMs through its baby race in 2013, with claims that the ASA ruled in 2014 are misleading:

Even with a typical diet, it’s not easy for toddlers to get all the nutrients they need. Cow & Gate Growing Up Milk is a great way to help them get some of the hard-to-get nutrients into their diet: Just 2 x 150ml beakers a day help top up your toddler’s diet with Vitamin D for development of bones, omega 3 (an essential fatty acid) and iron for brain development.

These claims were promoted during a ‘baby and toddler event’ in ASDA supermarkets in February 2014 with GUMs sold at discount. 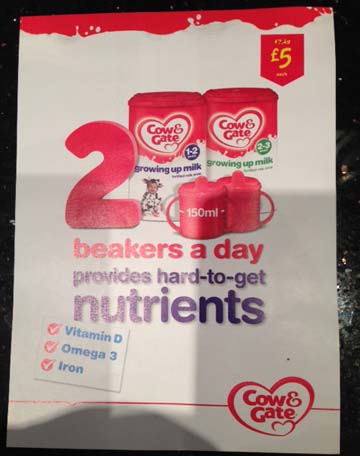 People were encouraged to put questions to ASDA pharmacy staff and to visit ASDA’s ‘Baby and Toddler Club’ website as a ‘trusted resource for nutrition and feeding advice’.

The site has a disclaimer in small print saying the publishers do not ‘make any representations as to the accuracy or efficacy of the information provided nor do they assume any responsibility for errors, omissions or contrary interpretation of the subject matter herein.’

NHS Choices, on the other hand, stands by its advice: ‘Accuracy: NHS Choices content will be accurate, balanced and transparent. Information given will be based on the best available scientific evidence and data sources.’

In 2011 the German Federal Institute for Risk Assessment found no advantage of growing-up milks compared to reduced fat cow milk and German Consumer Centres found they were 4 times as expensive as normal milk.

In 2012 the Australian Government’s infant feeding guidelines said: ‘Toddler milks and special and/or supplementary foods for toddlers are not required for healthy children.’

In 2013 the European Food Safety Authority concluded that GUMs have no additional value to a balanced diet. 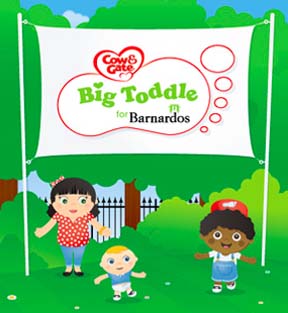