Commission Delegated Regulation (EU) 2016/128 of 25 September 2015 supplementing Regulation (EU) No 609/2013 of the European Parliament and of the Council as regards the specific compositional and information requirements for food for special medical purposes (Text with EEA relevance).  https://eur-lex.europa.eu/legal-content/EN/TXT/?qid=1477928633178&uri=CELEX:32016R0128

This is part of our guide to monitoring in the UK. This page explains what regulations apply in the UK for breastmilk substitutes, feeding bottles and teats, together with the international minimum standards that apply in all countries. The following pages explain what companies can and cannot do. They are followed by a page explaining where to report any practices that you think might break the rules.

The International Code and Resolutions 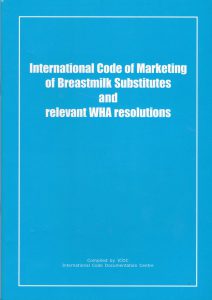 The International Code of Marketing of Breastmilk Substitutes was adopted by the World Health Assembly in 1981 as a “minimum requirement” for “all countries”.  These measures are there to both protect breastfeeding and protect babies fed on formula by ensuring information is adequate and marketing appropriate.

The World Health Assembly is the world’s highest health policy setting body, made up of Ministries of Health. The UK Government supported the adoption of the Code in 1981. Successive governments have also supported the Resolutions adopted since then to address changes in scientific knowledge and marketing practices and questions of interpretation.

However, these minimum requirements have still not been fully implemented in legislation in the UK. The United Nations Committee on the Rights of the Child has called on the Government to do so three times in response to evidence of company violations submitting by Baby Milk Action (in 2016, 2008 and 2002).

Even though the Code and Resolutions have not been introduced fully in law in the UK, companies should still abide by them. Article 11.3 of the Code states:

“Independently of any other measures taken for implementation of this Code, manufacturers and distributors… should… ensure that their conduct at every level conforms to them.”

Therefore, please report violations to Baby Milk Action, even if they are not covered by the law.

The current UK law is the Infant Formula and Follow-on Formula Regulations (2007), adopted by each of the four countries of the UK.

The Food Standards Agency introduced Guidance Notes in 2008, which set out how the Regulations should be interpreted. These apply across the UK.

These laws derive from European Union Directive 2006/141/EC, developed and approved by the EU Member States, including the UK.

Here is a link to the new regulations that will apply to infant formula and follow-on formula from February 2020:

Here is a link to the Regulation that will apply to foods for Special Medical Purposes.

The transition period will extend beyond March 2019 when the UK is scheduled to leave the EU.

New Statutory Instruments were introduced on 20 July 2016 with the arrangements for the transition. The main change before 2020 is that enforcement authorities in England, Northern Ireland and Wales can issue companies with Improvement Notices if they break the law. These will have deadlines attached and be legally enforceable (thanks to a Baby Milk Action campaign in Parliament). Companies can be prosecuted if they do not act by the deadline.

Scotland has not introduced an Improvement Notice regime, but moves straight to prosecutions. Further details here.

The laws are enforced by the food authority or, in the case of Northern Ireland, district councils, with Trading Standards or Environmental Health officers usually being responsible.

The Ofcom Broadcasting Code includes rules on product placement in programmes. This is where a company pays to have its product featured within the programme.

Section 9.13 of the Broadcasting Code states that it is prohibited to have product placement of : “infant formula (baby milk), including follow-on formula”.

Complaints can be registered with Ofcom.

This does not stop editorial use of products, but there must be no commercial arrangement.

The Advertising Standards Authority (ASA) is a self-regulatory body funded by the advertising industry.

The Advertising Code for print and broadcast advertising states that advertising of infant formula is prohibited, unless in a scientific publication or for the purpose of trade prior to the retail stage. It also states: “Marketing communications must not confuse between infant formula and follow-on formula.”

These reflect the provisions in the UK law.