Nestlé refuses to change baby milk marketing practices, but has shifted its position on breastfeeding

The response given in full below has been sent by Nestlé to members of the public who have raised concerns about its baby food marketing practices during Nestlé-Free Week 26 October – 1 November 2015. This is a week for people who support the boycott to do more to promote it and for those who don’t to give it a go.

It is interesting to compare this response with that from 2014 as we see a shift in Nestlé’s statement about breastfeeding. However, Nestlé still refuses to accept it needs to change its baby milk marketing practices.

We need to keep up the pressure on Nestlé to put its own house in order.

With regard to breastfeeding, last year, Nestlé said:

As we have pointed out, this is not in line with the World Health Organisation (WHO) recommendations.

This year Nestlé has brought its statement into line, saying:

A welcome shift, but of little meaning when Nestlé undermines breastfeeding throughout this period.

On 20 October 2015, the Bangladesh Breastfeeding Foundation issued a legal notice against Nestlé for violations of the “The Breast-milk Substitutes, Infant Foods, Commercially Manufacfured Complementary Foods and the Accessories Thereof (Retulation of Marketing) Act, 2013”.

Activities include advertisements in the press and events targeting health workers.

Nestlé knows that babies fed on formula are more likely to become sick than breastfed babies and, in conditions of poverty, more likely to die. Yet Bangladesh is one of the countries where it promotes its formula as the “gentle start” for babies, telling investors this is a “growth engine” for sales. Nestlé calls it “project happy”. Last year the Bangladesh Paediatric Association published a booklet of case studies called Tragedies of Infant Formula and Sub-Optimal Breastfeeding – an example is included in our members newsletter.

During Nestlé-Free Week supporters specifically asked Nestlé to stop claiming its formula “protects” babies and is the “gentle start”, which Nestlé ignores in its response. Baby Milk Action has put this request directly to Nestlé’s most senior executives in writing and at the shareholder meeting and they have refused to stop these practices (a shaming campaign did prompt an undertaking to stop claiming their formula is the “natural start” just before Nestlé-Free Week in 2014).

Nestlé’s comments are inset and in italics.

Thank you very much for your email.

Baby Milk Action comment: Nestlé clearly does not pay much attention to the emails people send as its standards response does not address the concerns they have raised. During Nestlé-Free Week 2015 some of those contacting Nestlé specifically asked it to stop promoting formula as the “gentle start” for babies and with the claim it “protects” babies.

Breast milk is the best nutrition for babies. This is why we support the World Health Organization’s (WHO) recommendation of six months exclusive breastfeeding, followed by the introduction of adequate nutritious complementary foods along with sustained breastfeeding up to two years of age and beyond.

Baby Milk Action comment: This is a shift from its response in 2014, where it only spoke of breastfeeding during the first 6 months. While claiming to support breastfeeding – and attempting to hijack campaigns highlighting the importance of appropriate nutrition during the first 1000 days from conception – Nestlé tells investors, its strategy is about project solutions.

It is worth recalling how far we have managed to shift Nestlé’s position. In the past Nestlé was dismissive of breastfeeding. While saying “breast is best” it attempted to justify its formula marketing strategies by suggesting a third of mothers were incapable of breastfeeding and those living in developing country slums had particular difficulty lactating. In reality, WHO says: “Virtually all mothers can breastfeed, provided they have accurate information, and the support of their family, the health care system and society at large.”

For infants who cannot be breastfed for the recommended period of time, infant formula is the only suitable breast milk substitute recommended by the WHO.

Baby Milk Action comment: the marketing requirements do not prevent breastmilk substitutes from being sold. These prohibit the use of idealising claims such as those Nestlé puts on labels and other strategies it uses, such as advertising of brand names, seeking direct and indirect contact with pregnant women and mothers of infants and young children and targeting of health workers.

We pledge to make these products available in a responsible manner to those who need them. As such, we are committed to fully complying with the WHO Code as implemented by national governments everywhere in the world.

Baby Milk Action comment: Nestlé says it complies with the Code, ‘as implemented by national governments’. However, Article 11.3 of the Code states that companies should abide by its provisions “Independently of any other measures taken for implementation of this Code”.

Only 35 countries have legislation fully implementing the Code – often because Nestlé and the rest of the baby food industry has lobbied against such measures. Even then, Nestlé does not comply in these countries. For example, products were seized in India in October 2012 for failing to abide by labelling requirements, a decision recently upheld by the courts in July 2014, despite an appeal by Nestlé. The Indian authorities have also stated that Nestlé sponsorship of health worker events breaks Indian law.

In 152 countries which are considered to be higher risk in terms of infant mortality and malnutrition, as a minimum we do not promote infant or follow on formulas for children under 12 months of age.

Baby Milk Action comment: Firstly, UNICEF has confirmed many times (including in writing to Nestlé) that the Code and Resolutions apply to all countries, not just those of Nestlé’s choosing.

Secondly, this is a case of Nestlé actually going backwards; when one strategy is closed down, Nestlé tries some other route to promote its products. In the past it said it would not advertise follow-on formula if it had the same branding as infant formula. However, it weakened this policy in July 2010 to restrict it to products for infant under 12 months of age. This driving down of standards has been linked to its involvement with FTSE4Good, which assesses companies against their own policies rather than the Code and Resolutions (see below). In this way it excuses advertising infant formula brands such as Nan in the mass media across the world.

The example below appeared in Breaking the Rules, Stretching the Rules 2014, showing Nan advertisements in Malaysia. 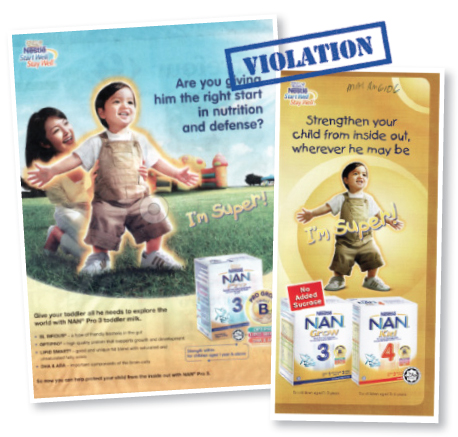 The advertisements show the 3rd and 4th formula in the range. The 1st being infant formula and the 2nd follow-on formula. The headline is: “Are you giving him the right start in nutrition and defence?” and suggests Nan provides protection.

We also specify that complementary foods should be introduced to children from 6 months of age.

Baby Milk Action comment: Nestlé’s change in labelling of complementary foods for use before 6 months of age should apply to all countries as exclusive breastfeeding is recommend for the first six months of life. The changes that it has made in the countries of its own choosing resulted from a 9-year campaign specifically on this issue. The World Health Assembly adopted Resolution 47.5 in 1994 stating the importance of, ‘fostering appropriate complementary feeding practices from the age of about six months, emphasizing continued breast-feeding and frequent feeding with safe and adequate amounts of local foods.’ Nestlé only agreed to stop promoting complementary food before 6 months in 2003, announcing it during a week of demonstrations at Nestlé sites in the UK. See the boycott successes page.

We investigate all concerns related to our breast milk marketing practices and promptly address any instances of non-compliance. We have been independently recognised as having the most robust systems in place to responsibly market breast milk substitutes.

Baby Milk Action comment: Baby Milk Action raised the violations in the Breaking the Rules report at the company’s shareholder meeting on 10 April 2014. The executive asked to respond by Nestlé Chairman, Mr Peter Brabeck-Letamthé, said that 90% of these violations comply with Nestlé’s own policies, demonstrating that these are not in line with the Code and Resolutions.

Indeed, Nestlé is the first, and continues to be the only, infant formula company to meet FTSE4Good Breast Milk Substitutes Marketing criteria. FTSE4Good is the FTSE Group’s responsible investment index.

Baby Milk Action comments: Nestlé was only included in the FTSE4Good Index in March 2011 after the criteria for Breastmilk Substitutes manufacturers were weakened. These look to company policies rather than the Code and Resolutions – and Nestlé weakened its own policies prior to being included, as described above. Organisations including Save the Children and UNICEF Laos have called on FTSE to bring the FTSE4Good criteria into line with the Code and Resolutions. FTSE has asked Nestlé more than once to stop implying that inclusion in FTSE4Good signifies Code compliance. Despite this, Nestlé implies otherwise, a strategy that comes from the Nestlé Chairman himself. See our briefing on FTSE4Good for further details.

Thank you once again for taking the trouble to contact us. I hope this reply answers your questions and that you enjoy our products in the future.

To reply to this email or if you would like further information, please click here:
[link specific to person contacted]