Click here to download this briefing paper as a pdf file. The online version links to references.

Nestlé is listed in the FTSE4Good ethical investment Index. Nestlé’s Chairman tells people this demonstrates it complies with baby food marketing requirements. This is not the case. FTSE has asked Nestlé more than once to stop misrepresenting what inclusion signifies. Here is the background.

1. Baby Milk Action recommends that people wishing to encourage baby food companies to improve their behaviour DO NOT invest in a FTSE4Good tracker as its company inclusion and assessment processes are flawed

FTSE introduced new Breastmilk Substitutes (BMS) criteria for including companies in its FTSE4Good Index in September 2010. Under these criteria a company does not have to comply with the international minimum marketing standards to be included. This allowed Nestlé to be added to the Index in March 2011 even though it continues to systematically violate the International Code of Marketing of Breastmilk Substitutes and subsequent, relevant Resolutions of the World Health Assembly (the Code and Resolutions). 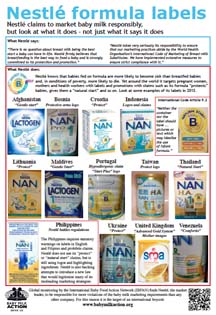 For example, Nestlé promotes its formula with claims such as it is the ‘natural start’, a ‘gentle start’ and ‘protects’ (download Baby Milk Action’s poster showing labels from Thailand, Afghanistan, Maldives and other countries). Despite Nestlé’s claims, babies fed on formula are more likely to become sick than breastfed babies and, in conditions of poverty, more likely to die.

FTSE Chief Executive, Mark Makepeace, wrote to the International Baby Food Action Network (IBFAN) on 17 June 2011 explaining why FTSE chose to change the standards to make it easier for companies to be included in the Index: ‘In the infant food sector we were not able to engage the companies as they were all being excluded from the index.’

Despite FTSE’s difficulties, Milk Action is in ongoing communication with Nestlé and other companies. Unlike FTSE, we have prompted changes to marketing practices – through public campaigns. For example, Nestlé stopped claiming its formula is ‘The new “Gold Standard” in infant nutrition’ after thousands of supporters emailed the company.

2. Save the Children and UNICEF: Nestlé violates the International Code of Marketing of Breastmilk Substitutes

Save the Children’s 2013 Superfood for Babies report in defence of breastfeeding documents Nestlé violations in China, India, Laos and Pakistan. For example, ‘Our recent survey in Pakistan reported that one-fifth of health professionals surveyed said they had received gifts from representatives of BMS companies…. Over half of these gifts were reported to have been Nestlé-branded’.

A UNICEF HQ spokesperson told Dairyreporter (22 April 2011): ‘I can confirm that Nestle violates the code.’

3. The FTSE4Good assessment process is flawed in its concept

FTSE assesses company activities in country, but against the company’s own policies rather than the Code and Resolutions. FTSE’s Chief Executive told Baby Milk Action when we offered to provide evidence of malpractice: ‘we will not be asking the assessors to act as a judge with regards to specific allegations, but rather to assess whether the companies practices on the ground are in-line with their stated policies.’

Save the Children recommendations to FTSE regarding FTSE4Good

To encourage companies to improve their policies, practices and accountability, FTSE4Good should, by 2015, extend its criteria for the inclusion of a BMS company on its index to include the company’s activities in all countries, rather than just those countries listed as higher risk, and should bring its criteria into line with the International Code and resolutions. It should assess company practices in selected countries against the Code and resolutions, as well as the company’s own policies.

Superfood for Babies: How overcoming barriers to breastfeeding will save children’s lives,
Save the Children, 2013

4. Nestlé is using FTSE4Good to undermine campaigns that hold it to account

Brabeck also defended Nestlé against accusations by Baby Milk Action that it contributes to the unnecessary death and suffering of infants around the world by aggressively marketing baby foods. ‘We are the only infant formula producer which is part of FTSE4Good. We are being checked and controlled by FTSE4Good. They make their audits in different parts of the world and we have to prove that we are complying with the WHO code and up to now we can prove that in everything we are.’

FTSE agrees with Baby Milk Action that Mr Brabeck’s comments are inaccurate. FTSE has had to ask Nestlé more than once not to suggest that inclusion signifies compliance with the WHO code.

Note 1: FTSE states that it had to make it easier for baby food companies to join the FTSE4Good Index by changing its criteria in September 2010 because it could not engage with companies who were excluded. The event, left, was not only sponsored by Nestlé, but involved a Nestlé Vice President and FTSE’s Head of Responsible Investment (responsible for FTSE4Good). Mr. Makepeace responded to Baby Milk Action’s briefing by stating: ‘We would like to clarify that the event that was mentioned in your article was not held by FTSE, but was held and produced by Chatham House. FTSE partnered with Chatham House to develop the programme, but had no commercial involvement in the event, and neither contributed any funding to Chatham House, nor received any funding from any of the sponsors involved, including Nestlé.’

FTSE has also explained the criteria were reviewed because only one company had been listed under the FTSE4Good Breastmilk Substitutes (BMS) criteria in force prior to September 2010 (Gerber – which was subsequently excluded when acquired by Nestlé) and the lack of companies complying was (according to FTSE) ‘something of concern to the FTSE4Good Breatmilk Substitutes Committee as they would like to see criteria where some companies are able to meet the standards. For most sectors approx half the companies are included.’

This was not the first time that FTSE had weakened its criteria. Save the Children’s 2006 report A Generation On: Baby milk marketing still putting children’s lives at risk states: ‘In 2003, the ethical investment index FTSE4Good developed criteria to determine whether or not baby food companies should be included in the index. Before then, all baby food manufacturers were automatically excluded from the index because of evidence of Code violations. In order to qualify for entry on the FTSE4Good index [now], baby milk companies do not have to demonstrate full Code compliance, only that they have put management systems in place to reach, eventually, Code compliance.’ The report includes a table naming the companies that are ‘engaging in negotiations with FTSE’.

So FTSE began by requiring companies to abide by the Code and Resolutions to be listed, the normal approach taken by the Socially Responsible Investment (SRI). As companies have continued to violate the Code, FTSE has changed the rules to try to allow half the sector onto its list.

Note 2: At least two organisations with substantial investments in Nestlé are amongst those providing advice to FTSE on the listing and assessment processes. This constitutes an unacceptable conflict of interest.

One of the investors is the Central Finance Board (CFB) of the Methodist Church, which controversially invested over £1 million in Nestlé in 2007. For full details of events before and after the investment, with reference to source documents, see Baby Milk Action’s archive site – click here. The CFB and the Joint Advisory Committee on the Ethics in Investment (JACEI) have since attempted to justify investing in Nestlé in reports that praise Nestlé executives for meeting with them. Yet, ethical investment organisations that refuse to invest in companies that violate the Code and Resolutions also meet with executives. Even a £1 million shareholding does not hold sway with executives who ignored a rebellion by 36% of shareholders to make their Chief Executive also Chairman in contravention of good corporate governance practices in 2005.

JACEI reported that Nestlé was added to the FTSE4Good Index, but did not indicate this was because FTSE had changed the criteria to allow companies that routinely violate the Code to be included.

Note 3: The inclusion of Nestlé in the FTSE4Good Index is causing confusion, being exploited by Nestlé and undermining methods that do hold the company to account.

For example, the United Reformed Church Assembly, a long-term supporter of the campaign to hold Nestlé to account, dropped away, not because Nestlé changed, but because the FTSE4Good changed. The URC Assembly restated its support for the Nestlé boycott in July 2010. The URC announcement at the time stated: ‘After animated discussion, a resolution was passed which effectively continues the boycott of Nestlé products at this time, but anticipates ending the boycott should the company gain acceptance by the FTSE4Good Index – through reaching FTSE4Good prescribed standards of corporate responsibility.’

The FTSE4Good criteria were weakened after this resolution, allowing Nestlé to be added to the Index in March 2011. The URC Mission Committee (which represents Church and Society issues) did not take the matter back to the Assembly as it said it was obligated to act on the Resolution, resulting in it ‘issuing an instruction to its Mission Council meeting to terminate the boycott of Nestle products.’ The Mission Council serves as the executive of the URC between General Assemblies and meets biannually.

Note 4: The boycott has been instrumental in forcing changes on Nestlé, because it puts a financial cost on malpractice. With sufficient publicity and public support, campaign action forces changes. A few examples: Nestlé agreed to translate its formula labels when Mark Thomas picked up on Baby Milk Action’s campaign for his television programme (watch here). A 9-year campaign saw Nestlé change on its policy on the labelling of complementary foods, making the announcement during a week of demonstrations in the UK, filmed by Swiss TV in 2003. Just last year, Nestlé said it had discontinued a leaflet claiming its formula is ‘The new “Gold Standard” in infant nutrition’ after receiving emails from thousands of boycott supporters. But other violations continue and Nestlé said it would only act on 4 of the 130 violations it counted in the Breaking the Rules report – that’s just 3% and included the leaflet targeted in the email campaign (Danone, which is also a significant source of violations, said it had already taken action to stop 50% of violations in its profile and agreed to further action on other issues highlighted).