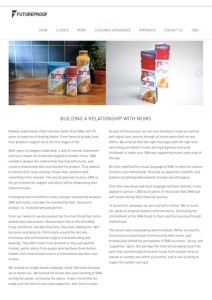 Thanks to Ethical Sponsorship Ireland for spotting this incredible piece outlining the strategy for getting SMA  – owned by Nestlé since December 2012  – back to No 1 spot in the UK.

So much more reassuring to  think of corporate executives  as  ‘mums’

BUILDING A RELATIONSHIP WITH MUMS

Nobody understands infant nutrition better than SMA, with 90 years of expertise in feeding babies. From formula to baby food, their products support all of the first stages of life.

After years of category leadership, a lack of internal investment and focus meant the brand had slipped to number three. SMA needed to deepen the relationship they had with mums, and create a relationship that went beyond the product. They wanted to refresh their long-standing ‘Know-How’ platform with something more relevant. The overall goal was to place SMA as the go-to brand for support and advice whilst showcasing their infant formulas.

From our research, we discovered that the main thing that mums wanted was reassurance. Reassurance that at this incredibly tricky, emotional, and daunting time, they were making the right decisions and doing ok. Particularly around the delicate, emotional, and controversial subject of breastfeeding and weaning. They didn’t want to be dictated to; they just wanted trusted, gentle advice from people who had been there before. Indeed, their most trusted source of information was their own mother.

We created an insight based campaign called ‘We know, because we’re mums too’. We heroed the mums who were working at SMA, writing the guides, and giving the advice. It was critical that we made sure the tone of voice was supportive, and ‘mum to mum’.

As part of this process, we ran user testing to create an optimal and logical user journey through all touch points both on and offline. We ensured that the right messages with the right tone were being provided to mums during pregnancy and early childhood, to make sure SMA was supporting mums every step of the way.

We then redefined the visual language of SMA to show the realism of mums and motherhood. This took us away from scientific and product led photography towards lifestyle based imagery.

Once this new visual and tonal language had been defined, it was applied to almost 1,000 touch points of interaction that SMA had with mums during their maternal journey.

To launch the campaign we sent out half a million ‘We’re mums too’ packs to pregnant women and new mums, illustrating the commitment of the SMA brand to them and their journey through motherhood.

The results were outstanding and immediate. Within six months, the brand increased levels of interactivity with mums, and dramatically shifted the perceptions of SMA to a more ‘caring’ and ‘supportive’ space. But perhaps the most encouraging result has been that commercially the brand moved from number three in market to number two within six months, and is now pushing to regain the number one spot