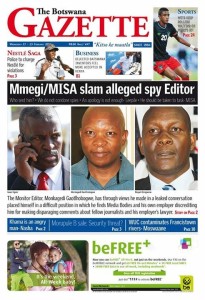 “Our investigations into the matter are now complete. We will now prepare a charge-sheet for both the company and the person responsible for organizing the event…”-King Tshebo.

Following a series of investigations by The Botswana Gazette which revealed several possible violations Nestlé was implicated in, Naledi Police in Gaborone say they will charge the transnational food and beverage giant for violating regulations on the Marketing of Food for Infants and Young Children.

Speaking to The Botswana Gazette, Naledi Police Station Commander King Tshebo said the company will be charged as per Section 15 of the 2005 Marketing of Foods for Infants and Young Children regulations. This is after Nestlé hosted a “Nestlé Doctors Dinner” for a group of doctors practicing in Botswana at Cresta Lodge in Gaborone last year September claiming to “increase awareness” on breastfeeding and their products.

“Our investigations into the matter are now complete. We will now prepare a charge sheet for both the company and the person responsible for organizing the event as the law prohibits advertising of infant food without the Ministry’s consent,” he said.

By holding this meeting, Nestlé may have violated Part 3 Section 8 of the regulation, because the event was possibly a “direct or indirect method of introducing a designated product or encouraging the buying or use of a designated product’, something which is prohibited by the regulation. The regulation also states that no manufacturer or distributor should offer any benefit to a health worker including “funding for attendance of meetings, seminars or conferences”.

This development follows a series of investigations by The Botswana Gazette which revealed several possible violations Nestlé was implicated in. Ministry of Health also last week called for the resignation of Professor Gabriel, Anabwani whose role at Nestlé Nutrition Institute may be in conflict with ethical requirements for his job Baylor Children’s Clinic where he is also Executive Director.

Meanwhile, not all the violations by the company have been registered with the police. Documents seen by this publication show that a retail wholesaler who Nestlé supplies placed promotional pamphlets in their store which promoted baby food products and feeding utensils in their “Christmas Specials”. According to the Marketing of Foods for Infants and Young Children Regulation, Nestle may have violated part 3, section 8 of the regulations which prohibits “promotion and advertising of any designated product for infants”.

Tshebo said he was not aware of Nestlé’s violation in the latter matter. In a previous interview with this publication, Nestlé South Africa Corporate Affairs Director Ravi Pillay said he was aware of the matter at the time but need to “establish the facts of the Jumbo Store promotion and supporting information on the Cresta Lodge issue.”

By KAGO KOMANE
THE BOTSWANA GAZETTE