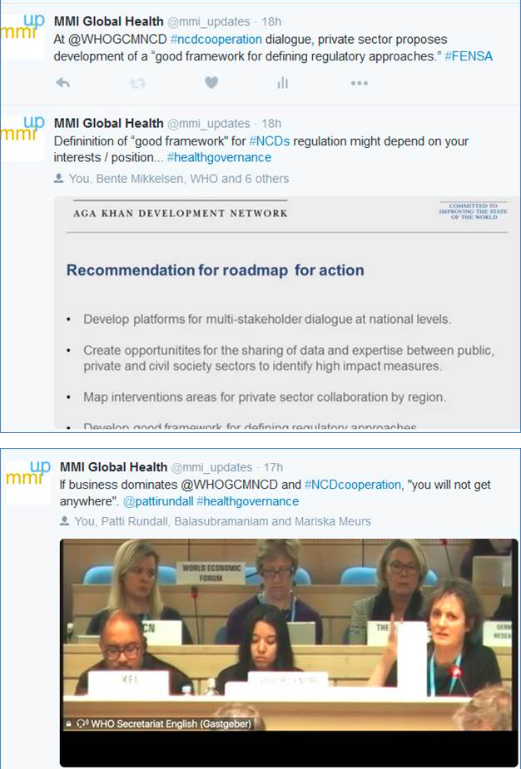 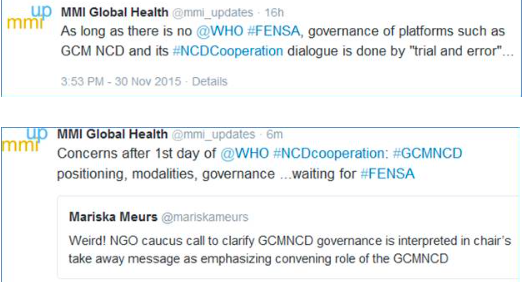 I’ve been attending the Global Coordinating Mechanism (GCM)  on Non Communicable Diseases (NCDs)  that has been taking place at WHO HQ in Geneva. Its all been very disturbing especially since this is taking place before WHO’s policy on its engagement with the private sector is settled.

Throughout the two days, despite appeals from WHO’s Director General,  Dr Chan  to be wary of corporate lobby and interference – the carefully selected speakers, including business front groups and corporate-funded NGOs have promoted ever closer  business involvement in  tackling NCDs.  The calls by independent NGOs for caution and clear safeguards on Conflict of Interest and for GCM to clarify  its governance – were continually overlooked and presented in the summary as “approval’ of the GCM!

The 90 representatives from Member States present at the meeting were fed case studies that uncritically promoted Public Private Partnerships, Corporate Social Responsibility,  Philanthropy and  ‘Platforms’ at country level. Apparently in this ‘new world’  there caution and vigilance is far less important that  ‘inclusiveness’ and ‘trust.’

Having attended the EU Commission’s Platform for Action on Diet, Physical Activity and Health for eight years, I can testify how ineffective and problematic  these Platforms are – even when experienced NGOs are present.   To promote this idea as a safe and effective  model for developing countries is simply irresponsible in my view  – and if taken up will give corporations unprecedented access to national policy setting  – something WHO has repeatedly stated is not  wise.

Without a  strong independent  NGO sector that monitors what’s actually happening  – how will policy makers be able to challenge or check whether  the corporate  claims and promises are true?  By their very nature ‘Platforms’ encourage  NGOs to ‘collaborate with’ and form partnerships with businesses  – and as a consequence NGOs soon lose their independence and are less inclined to speak out – the very thing Dr Chan appealed for!

One point that was never discussed  was where, when and how the Private Sector should be involved.  For WHO, many Member States,  IBFAN and other NGOs working on Tobacco, baby foods, food and drink  – it is clear that corporations should not be involved in policy setting.  And for many of us too close corporate involvement in  ‘implementation’ is also worrisome – especially in relation to  corporate involvement in education – the key way that baby food companies have misled millions of mothers. However things are much less clear when it comes to the  funding of  roads,  playgrounds, and the built environment.  One thing is for sure – there is no such thing as a free lunch and  relying on Corporate philanthropy is as risky as it ever was!

The existence of the  GCM illustrates the urgent need for WHO to adopt a  strong framework for interactions  that will  safeguard its integrity, independence, credibility and reputation so that it can carry out its mandate to protect health for all.

Next week Member States will have another attempt to resolve their differences on the Framework of Engagement with Non State Actors  (FENSA) – a confused and contradictory document that is riddled with fundamental problems.   Para 49 for example continues to say “Official relations is a privilege that the Executive Board may grant to international business associations….[whose] aims and activities …shall be in conformity with the spirit, purposes and principles of WHO’s constitution”. This precondition obscures the fundamental nature of corporations, which have a fiduciary mandate to work for profit-maximization.   How on earth can their ‘aims’ be in conformity with those of WHO?

Up until now, the FENSA  discussions have mixed up conflicts of interest with conflicting interests – with the underlying message that  that more “engagement” with non-State actors will be beneficial as long as the ‘engagement rules’ are accepted. IBFAN is calling for a complete reopening of the document to fix its many  fundamental problems.

Again and again I was reminded of the World Economic Forum’s  Global Redesign Initiative, that proposes that some issues are taken off the agenda of the UN system and are addressed instead by ‘plurilateral, often multi-stakeholder, coalitions of the willing and the able.’ WEF envisages a world managed by a coalition of multinational corporations, nation states (including through the UN System) and select civil society organisations.