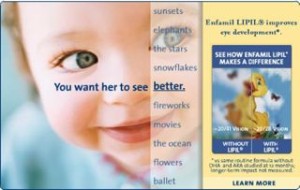 Members of the European Parliament (MEPs) voted today in favour of a Resolution to block a disputed DHA health claim on follow-on formula labels, but were short of the absolute majority of all MEPs (including  the 57 not present) required to compel the European Commission to act.  The vote was 328 for the Resolution and 323 against, but this was insufficient to block the claim: “DHA intake contributes to the normal visual development of infants up to 12 months of age”.

Click here to find out which MEPs voted for and against the Resolution.

This is the first time since the Health Claims Regulations were passed in 2006 that the Parliament has voted on a claim. The Resolution came to the full Plenary following a positive vote by the Environment, Public Health and Food Safety (ENVI) Committee in March.

Above: A typical marketing image from Mead Johnson, which registered to use the DHA claim, showing how the company idealises formula with DHA as improving baby’s eye sight in many countries. Following legal action and investigations in the US Mead Johnson has stopped making such claims in the US.

Campaigners say the influence of the baby food industry was revealed in some of the arguments used to back the claim. Patti Rundall OBE, Policy Director of Baby Milk Action, said:

“Authorisation of this claim hands the industry the marketing tool they desired – and brings the EU Health Claims Regulations into disrepute.  There is clearly no proven benefit from DHA in follow-on formulas, and possible risks so the DHA claim. This makes a mockery of the whole process  – which is touted as a Gold Standard, and which has, for the most part, provided very important safeguards to European consumers, throwing out many, many other bogus claims. But it has failed parents and babies today. If there really was evidence to support this claim, it should have triggered a review of the composition requirements to remove inferior formulas from the market.”

Speaking after the vote, Labour’s Glenis Willmott MEP, who led the challenge to the claim, said: “Today a majority of this parliament voted against this health claim. MEPs have concluded that scientific consensus simply doesn’t exist. Yet now manufacturers will be free to target parents with marketing messages that many medical professionals and health organisations believe should not be allowed.

Glenis Willmott went on to say that the vote will add pressure for a full review of whether claims of this nature should be allowed: “Clearly it is a disappointment not to get the number of votes we needed, but this result still sends a strong message that there is deep unease about health claims of this sort.”

In a letter to Glenis Willmott the World Health Organisation said:

“WHO does not have a recommendation about the addition of  docosahexaenoic acid (DHA) to formula milk…..to date no solid evidence exists to be able to say that adding DHA to infant formula will have important clinical benefits. Were WHO to give such a recommendation, it would have to follow a strict guideline development process based on grading of all  available evidence collected through systematic reviews by expert panels free from conflict of interest.”

Campaigners believe that the MEPs were misled, not only by the baby food industry, but also by several messages from the European Commission that ignored important information, including the clarification by the European Food Safety Authority (EFSA) that there was actually NO SOUND EVIDENCE for the claim on follow-on formulas.  Paragraph 17 of the Health Claims Regulations states: “A claim should be scientifically substantiated by taking into account the totality of the available scientific data, and by weighing the evidence.”

Martek, a leading manufacturer of DHA additives, has seized on the failure to reach the level required to compel the Commission to act and has ignored the fact that the majority MEPs who did vote supported the Resolution, telling Nutraingredients: “We are pleased that science, innovation and choice prevailed today. This vote also emphasised the European Parliament’s support for companies who pursue important, science-based innovations that improve the health and nutrition of European consumers and fuel SME growth.”

If the Resolution had been passed the claim, which is already being used around the world in marketing campaigns, would have been outlawed.

Researcher Dr. Mijna Hadders-Algra,  Professor of Developmental Neurology,  is conducting a long-term follow-up study of children who were either breastfed or fed on DHA (with AHA) or non-DHA supplemented formula, warned MEPs that the DHA claim is not supported by the body of scientific research and that there is evidence of minor long-term negative impacts. She explained:

“Breastmilk contains DHA, but this does not imply if we supply infants with DHA in an artifical dosage that this will promote health or development. What we learned from our studies that it is the balance between fatty acids which plays a prominant role. Supplying one, may have a negative impact on other fatty acids with net negative effect. Breastmilk most likely contains the adequate balances, suggesting that nature knows how to handle this.”

Campaigners allege bogus arguments have been made in favour of claim. Esther de Lange MEP from the Netherlands suggested that blocking the claim would deny improved formula and information to mothers who couldn’t breastfeed because of HIV/AIDS, early births or cancer. DHA was legally permitted as an ‘optional’ rather than a ‘required’ ingredient in formula because when the  regulations were last reviewed it was found to have ‘no proven benefit’. It is noteworthy that Esther de Lange was a lobbyist for German fruit juice and alcohol trade associations before entering Parliament and in 2010 sponsored Breakfast Week for the European Breakfast Cereal Association (which includes baby food giant, Nestlé). The cereal industry is particularly supportive of health claims and is apparently wanting to add DHA to cereal to be able to make claims about aiding brain and eye development.

Particularly damaging to clear evaluation of the scientific evidence was an intervention by Professor Berthold Koletzko a researcher who has for years worked with the baby food industry. He is the recipient of the Freedom to Discover Award of the Bristol Myers Squibb Foundation, owner of Mead Johnson at the time, the company that filed the application to use DHA claims on formula. Prof. Koletzko is also lead author of a paper recommending the addition of DHA to formula which is widely used by the industry and arose from a scientific workshop; the paper acknowledges: “The scientific workshop held at Barcelona was financially supported by Martek Biosciences Corporation.” He wrote to MEPs in the name of the German Paediatric Association, but did not declare his many industry connections.

“Even if Formulaide (DHA/AHA) had no benefit we think that it would be widely incorporated into most formulas as a marketing tool and to allow companies to promote their formula as ‘closest to human milk’.”

A systematic review of the science by the Cochrane Library, updated 2007, states: “This review found that feeding term infants with milk formula enriched with LCPUFA had no proven benefit regarding vision, cognition or physical growth.”

See video about the risks of DHA in formula by the Cornucopia Institute: http://www.youtube.com/watch?v=L6G2i80MG50

Mijna Hadders-Algra, MD, PhD, Professor of Developmental Neurology,  has carried out a review, including of research on visual acuity, “Effect of Long-Chain Polyunsaturated Fatty Acid Supplementation on Neurodevelopmental Outcome in Full-Term Infants”. http://www.mdpi.com/2072-6643/2/8/790/pdf

Dr. Hadders-Algra has informed MEPs regarding the proposed DHA claim on follow-on formula: “We have not studied the effect of DHA supplementation at ages beyond 6 months. But from the supplementation studies at early ages (from birth onwards), where you expect the largest impact on development, we know that only a temporary beneficial effect could be established.”

A 2006 Review Article in the Journal of Specialists in Pediatric Nursing looking at “growth, cognitive, neurological, and visual development of term infants” found:  “The majority of studies found the addition of DHA and ARA to have no significant effect on infant development. … More expensive formula with endogenous DHA and ARA is not necessary.” – Wright, K., Coverston, C., Tiedman, M., Abegglen, J.A. (2006) Formula supplemented with docosahexaenoic acid (DHA) and arachidonic acid (ARA): a critical review of the research. Journal for Specialists in Pediatric Nursing 11: 100–112

The lead author, Kristen Wright, has examined evidence since her review and said in a response to MEPs: “Thank you for your interest in this topic and for your concern to obtain factual information before voting to pass laws on a matter as important as this…. DHA is important for other aspects of health (particularly in decreasing the risk of cardiovascular disease in adults) but with the limited data available and mixed results of clinical trials, I would not recommend endorsing the health benefits for infant development at this point.  Future research and conclusive clinical outcomes (not just the increased presence of these fatty acids in blood) and proper dosage should be carried out in order to substantiate these claims.”

UNICEF has agreed in a message to one of the proposers of the Resolution that there is no scientific consensus of benefit and highlighted how such claims misinform and also undermine breastfeeding:

“There can be little doubt that the use of such health claims can mislead parents into thinking that the formulas are as good as, if not better than breastmilk. They are not informed that the claims of improved visual development are based on a comparison with non-fortified artificial formula, and not with breastmilk, which the evidence shows leads to optimal survival, growth and development. And as you point out in your e-mail, there would appear to be no consensus in the scientific community about the effects of supplementing DHA.”

In the United States, the Food and Drug Administration has noted evidence of adverse reactions to formulas with DHA and requires companies to keep track of such cases. The FDA has recorded 98 cases itself by 2007.

What is the evidence that addition of DHA and ARA to infant formulas is beneficial? The scientific evidence is mixed. Some studies in infants suggest that including these fatty acids in infant formulas may have positive effects on visual function and neural development over the short term. Other studies in infants do not confirm these benefits. There are no currently available published reports from clinical studies that address whether any long-term beneficial effects exist.

Why has FDA asked manufacturers to do postmarket surveillance of infants consuming these formulas? These are new ingredients that were not used in infant formulas in this country before early 2002, and infant formulas containing ARASCO (ARA Single Cell Oil) and DHASCO (DHA Single Cell Oil) have been marketed in other countries for only a few years. FDA views any evaluation of the safety of use of new food ingredients such as DHASCO and ARASCO as a time-dependent judgment that is based on general scientific knowledge as well as specific data and information about the ingredient. Therefore, scientific data that become available after specific products containing a new ingredient enter the market must be considered as a part of the totality of information about the ingredient. Pre-market clinical studies evaluating the effects of infant formulas containing DHASCO and ARASCO on physical growth and some aspects of development are short-term studies, while some studies suggest that feeding of infant formulas with oils containing DHA and ARA to infants may have long-term effects on growth and development. For all these reasons, manufacturers have been asked to closely monitor these new infant formulas in the marketplace.