Tigers dramatises the true story of a former Nestlé baby milk salesman, Syed Aamir Raza, who exposed the aggressive marketing practices of the company when he realised that babies were dying from unsafe bottle feeding. Aamir was helped in his mission by Baby Milk Action, (the Uk member of the global network IBFAN) who are  represented in the film by the organisation called the HUB. The character Maggi, represents IBFAN members who helped Aamir, including Patti Rundall and Mike Brady of Baby Milk Action.

In 2001, on realising that Nestlé bought Perrier in 1992 so was the sponsor of the Perrier Comedy Award, Suzy Merrell, Dana McLeod and the Out of the Blue team decided there and then to do something about it.  They started a new corporate-free Tap Water Award at Edinburgh’s  Bongo Club and invited comedians to boycott the Nestlé Perrier Award. Stars such as Steve Coogan, Emma Thompson (who won the Perrier before Nestlé took over the company), Victoria Wood, Julie Christie, Rob Newman, Mark Thomas and Stewart Lee all spoke out to the media. Perriermedia2001.  Time after time the controversy featured in the  Perrier Awards coverage and Nestlé started hiding their venues.  The final straw came when, in  2005,  campaigners managed to project a message about Nestlé’s harm to babies on to the wall where the awards were being presented.   In 2006 Nestlé withdrew from the award that Perrier had sponsored since 1981.

Patti Rundall and Mike Brady  will be joined at the Take One Action screening by Dana MacLeod.

The clip below was produced in 2001, when the ultimately successful Nestlé Perrier Award Boycott was launched.

Pictured above:  Suzi Merrell – of the Bongo Club/Out of the Blue  – a key founder of the Tap Water Awards – speaking at the Tap Water Launch. August 2001. Perriermedia2001

“It is great to be back in Scotland and to celebrate the amazing success of the Tap Water Awards that without any big PR budget did so much alert people to what was really going on. Nestlé will tell you this is an old story. Not true – when the filmmakers researched the story they found that company representatives continue to target health workers.  The sick bottle-fed babies shown in Tigers were filmed in 2013.

In 1980 one baby was dying every 20 seconds because it was not breastfed. In 2000 it was one every 30 seconds. Today its one every 40 seconds. Progress of a sort – but still far too many needless deaths, traumatised mothers and children not reaching their full potential. Meanwhile, monitoring by IBFAN and others on the ground find Nestlé and other baby formula pushers continue to break international marketing rules, putting their own profits before the lives and well-being of babies and their families.”

Nestlé’s senior executives refuse to stop practices such as promoting infant formula with the claim it “protects” babies, even though they know babies fed on formula are more likely to become sick than breastfed babies and, in conditions of poverty, more likely to die. The Nestlé boycott gives executives a financial reason to change and agreed to stop claiming formula is the “natural start” for babies this year following a shaming campaign. See the Nestlé-Free Zone page.

Tigers will also be shown in Glasgow on 20 September.

The film will be on general release across the UK in the future.

An image from a protest at the Perrier Award in 2004 (click on image for hi-res version). 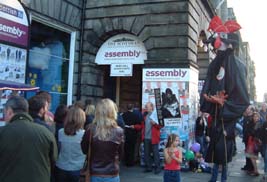