Nestlé has quietly weakened its Policy and Instructions for Implementation of the WHO International Code of Marketing of Breast-milk Substitutes.

The table in Update 44, April 2012. shows the change and the various ways in which Nestlé’s policy and instructions fail to respect the Code and subsequent, relevant Resolutions of the World Health Assembly.

Although monitoring evidence shows that Nestlé breaks its own weaker instructions, previously they claimed that Nestlé would not promote (in countries of its own choosing): “a) all infant formula and b) all follow-up formula products except in the rare instances where they have brand/label design which is distinctly different from infant formula.” 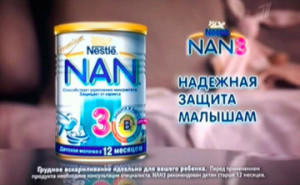 It states that “growing up milks” are specifically excluded from the Instructions.

Hence, its advertising of Nan 3 in, for example, Armenia (classified by Nestlé as a high-risk country covered by its Instructions) is permitted (left) under Nestlé’s latest Instructions.

This would not have been permitted under the previous Instructions as it is branded identically to the infant formula and other follow-on formula in the range, as shown on the promotional leaflet below, distributed to health facilities.

Many people have contacted Nestlé about these and other violations as part of our email Nestlé campaign.

Nestlé has not taken action to stop these violations (in some cases because they do not violate the Nestlé Instruction, though they violate the Code).

Yet in its Creating Shared Value report, released prior to its shareholder meeting taking place on 19 April 2012, Nestlé states:

“19 concerns about non-compliance with the WHO Code, attributable to Nestlé and requiring remediation, were raised in 2011; corrective action was taken in all instances.”

What about the violations raised by Baby Milk Action, other members of the International Baby Food Action Network (IBFAN) and the general public?

Nestlé explains how it exploits the loophole it has introduced into its Instructions on its website: “In these ‘higher-risk’ countries, we do not advertise or promote baby milks for babies below one year of age. Our growing-up milks, such as NAN 3, are milks adapted to the nutritional requirements of young children above the age of one year.”

Nestlé makes much in its Creating Shared Value report about it being included in the FTSE4Good ethical investment index. FTSE weakened the criteria for breastmilk substitutes prior to Nestlé’s inclusion. It was excluded under the previous criteria, which required compliance with the Code and Resolutions – now they look to company’s own policies and management systems.

“After rigorous evaluation of our policies and procedures, PricewaterhouseCoopers conducted a verification assessment at our headquarters and businesses operations in India and Zambia and investigated on-the-ground evidence of our behaviour.” 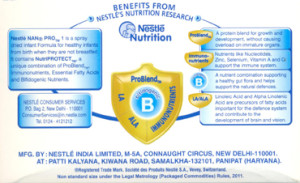 However, as IBFAN has pointed out to FTSE, PricewaterhouseCoopers “rigorous evaluation” not only missed the fact Nestlé Instructions are weaker than the Code and Resolutions, they apparently missed the fact that Nestlé’s infant formula labels in India are in breach of the Infant Milk Substitutes Act.

The Indian Law forbids “pictures or other graphic material or phrases designed to increase the saleability of infant milk substitutes or infant food.”

Nestlé’s Nan 1 infant formula on sale now and at the time of FTSE’s research, claims to support ‘the immune system’ ‘healthy gut flora’ and ‘natural defences’ and ‘contribute to the development of brain and vision.’

In our opinion, which has been clearly expressed in our letter dated 17 August 2010, such activities are violative of the [Indian Law – the IMS Act]*. I draw your kind attention to another letter dated 29 December 2010 sent by the Ministry of Health and Family Welfare to your organization and others expressing that ‘IMS Act clearly prohibits sponsorship of health workers or their association directly or indirectly by the Infant Food Manufacturing companies’.

We carry out these activities in accordance with the WHO Code with specifically allows companies to ‘donate fellowships, study tours, research grants, attendance at professional conferences or the like’, as long as the institution to which the professional is affiliated is informed.

Mr Bulcke and FTSE not only ignore the position of the Indian Government, but the subsequent Resolutions of the World Health Assembly that call for care over conflicts of interest.

So much for taking corrective action in all instances.