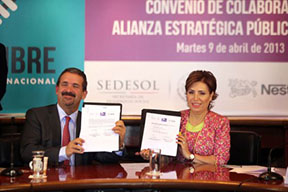 CLICK HERE for media coverageWhile welcoming the Mexican Government’s promise to include the protection and support of breastfeeding in its newly launched National Crusade Against Hunger, the International Baby Food Action Network (IBFAN) is deeply concerned about the news that the initiative involves partnerships with global food giants such as  PepsiCo, Nestlé, Walmart, 7 Eleven and KMart.

As part of the partnership agreement signed yesterday, Nestlé will run a programme called Mi Dulce Negocio Nestle  (My Sweet Business). This will create a network of 15,000 women who will sell ‘nutritional’ and other products in the poorest communities and give nutritional advice – all sponsored by Nestlé.  (Nestlé will run courses for women on the business of selling  desserts while PepsiCo will create a formula for pregnant and nursing mothers.)

Mexican people already suffer one of the world’s highest rates of obesity and diabetes – diseases that are largely driven by the marketing of the ultra-processed foods that are sold by these companies. The initiative will, in effect, subsidize and facilitate the penetration of Nestlé products into the Mexican market, under the perfect philanthropic guise of conquering malnutrition. Such businesses partnerships affect the development of food policies and undermine local food production and traditional food culture.

About half of Mexico’s 115 million population is classified as poor, with about 12 million of those living in extreme poverty. Unveiling his plans in January, Mexican President Enrique Pena Nieto, had cited Brazil’s efforts to put an end to poverty as an inspiration. Under its former President Lula da Silva, Brazil is said to have lifted around 20 million people out of poverty between 2003 and 2009.   What seems to have been forgotten is that while initially Nestlé was involved in the Zero Hunger campaign, after protests and organised pressure from civil society and government officers, it was excluded. it was excluded.  Zero Hunger promoted strong linkages with local farmers and supported local economies through traditional foods

Patti Rundall, OBE, Co-Chair of IBFAN and a leader of the 20-Country Nestlé Boycott is this week meeting policy makers at the Senate and Congress, to discuss the global concern about conflicts of interest and the need to protect health policies from the commercial interests.

“It is shocking and sad that President Nieto has allowed the Crusade – which has such important objectives – to be captured by some of the world’s most dangerous corporations, precisely those who are driving the chronic disease epidemic. There is no doubt in my mind that these ‘partnerships’ will distort the Mexican Government’s laudable aim to tackle hunger. However genuine these companies and their public relations teams may sound, their top strategy priority is to change the traditional eating patterns in developing countries. Their tricky tactics undermine confidence in local fresh foods and breastfeeding and  will  lead to more, not less, malnutrition. “

“The involvement of 15,000 women hired by Nestle to promote food education, could represent one of the biggest violations of the International Code of Marketing of Breastmilk Substitutes and the subsequent World Health Assembly Resolutions.  These UN rules warn against such conflicts of interest, and forbid baby food manufacturers from making direct or indirect contact with mothers.

We should make a call to the Mexican government to stop this immediately and instead bring in regulations that incorporate the Code and ban junk food marketing to children.  These marketing controls should be a central plank of the Crusade to protect children.  In my region of Chiapas, every day I see how bad infant feeding results in malnutrition and infant deaths. This is an outrage that is totally avoidable.”

Speaking about his concerns about Walmart and 7Eleven, Alvaro Urreta Fernandez, President of the Union of Producers and small merchants, Mexico City,  said:

“The uncontrolled growth of these multinational corporation has a negative economic and social impact, harming small producers of fruits and vegetables, encouraging an increase in the consumption of junk foods. We have seen that the consumption of fresh fruits and vegetables is dramatically decreasing due to the presence of these companies. We urgently need international support to denounce this situation.  Instead of  allowing multinationals to be partners in this Crusade against Hunger,  we need the Mexican Government to support small producers and peasants.”

Note:  The briefing on milks for mothers isan excerpt from a longer briefing about Fonterra . This can be purchased  from the ICDC IBFAN website.  http://www.ibfan.org/icdc/