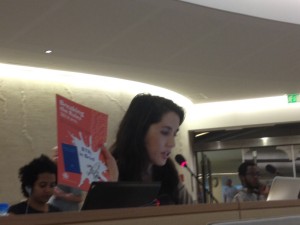 watch the webcast of the session at UN Web TV – STARTING NOW. PROGRAMME OF WORK IGWG, Resolution A_HRC_26_9 Discussions will continue on Wednesday 8th  (10am-1pm and 3-6pm) and Thursday 10am-1pm and 3-6pm) You can also follow developments on Twitter @ISHRGlobal and via the hashtag #BizHumanRights.

The open-ended intergovernmental working group (IGWG) towards a Treaty on Transnational Corporations (TNCs) and other business enterprises with regards to human rights, is taking place from 6-10 July in Geneva, paving the way for stopping corporate impunity. FIAN International, together with IBFAN and other partners from the Treaty Alliance (TA), will be following up discussions and co-organizing side events to give a voice to the demands of wider civil society. The week of mobilization will bring together representatives from social movements and grassroots organizations – often those most affected by human rights abuses, thereby emphasizing the real consequences of corporate impunity on the ground, as well as the need to have access to an effective remedy. Activities are expected to take place both in an out the UN – Palais des Nations building, and throughout the first IGWG session. 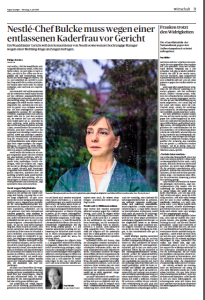 Yasmine Motarjemi – (left) the Nestle Whistleblower – also made a statement.

In particular, the International Baby Food Action Network (IBFAN), FIAN International, Franciscans International, the Women’s International League for Peace and Freedom (WILPF), CIDSE and Friends of the Earth, will be co-organizing two side events on 6 and 7 July. The events will look into the impact of transnational corporations and other business enterprises on grassroots communities, and the social movements’ perspective on the need of international regulation.

The 910-organization TA has been working together towards a legally binding instrument since 2013, when it first released a series of demands, including the passage of a UN Human Rights Council Resolution to establish an IGWG with a mandate to develop the treaty.  Ahead of the first session of the IGWG, the TA issued a second statement with some specifications on how processes, scope and content should be approached.

IBFAN hopes that the human rights-based mobilization further ensures that States actively participate in good-faith and constructively with the development of the treaty, as well as, together with the IGWG, safeguard their integrity from undue influence by actors from or related to the private sector.

For more information about the events on 5 and 6 July, please click here. Follow the IGWG session and TA activities via #StopCorporateAbuse For media enquiries, please contact camille.selleger[at]gifa.org

The Working Group is established through resolution A/HRC/RES/26/9 (resolution 26/9), adopted by the Human Rights Council on June 26th, 2014.   The OEIWG is mandated to elaborate an international legally binding instrument to regulate, in international human rights law, the activities of transnational corporations and other business enterprises” (para. 1 of resolution 26/9). Here are written and oral  statements from IBFAN and other  NGOs at the intergovernmental working group (OEIWG) on Transnational Corporations (TNCs) and other business enterprises with respect to human rights, which is meeting this week in UN, Geneva. http://www.gifa.org/wp-content/uploads/2015/07/GIFA-Oral-Statement_GENERAL-COMMENTS1.pdf IGWG contribution FoEE, BftW, GPF, CIDSE, IBFAN, SOMO_July 2015 FINAL CIDSE oral statement_Scope_Rights GIFA Oral Statement_PANEL IV_HR COVERAGE SOMO oral statement joint submission in Panel II on scope_final

Programme of work of the first session of IGWG on TNCs and HRs. We are planning to deliver oral statements during the following agenda items: 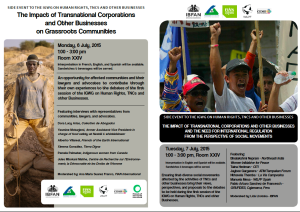