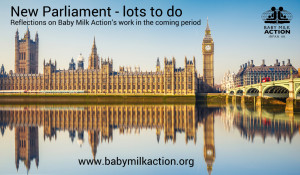 The UK elected a new Parliament on 7 May. The Government has been formed by the Conservative Party, which won 331 seats out of 650.

There are several key developments in the pipeline for the new Parliament and we need your support to work on these – please help us with a donation, becoming a member or buying something from our Virtual Shop.

We will work with the elected members from the government and all parties to strengthen measures to protect mothers, babies and their families from aggressive marketing by the baby food industry. We are also calling on the new government to reintroduce the national infant feeding survey and to meet all commitments made by past governments under international agreements (such as the Global Strategy for Infant and Young Child Feeding).

During the election campaign, we asked all parties represented in the national Parliaments for their infant feeding policies. Although the Conservatives, the governing party, did not respond, we received answers from most of the others elected to the new Parliament. You can read where they stand on these issues here.

Action is needed in the UK. This year we have again reported on the infant feeding situation to the UN Committee on the Rights of the Child as part of the Children’s Rights Alliance for England and submitted evidence of ongoing violations of baby food marketing standards. Last time the Committee report on the UK (2008) said:

“The UN Committee on the Rights of the Child recommends that the State party implement fully the International Code of Marketing of Breast-milk Substitutes…. The Committee is concerned that implementation continues to be inadequate and that aggressive promotion of breastmilk substitutes remains common.”

Governments since then said they were constrained by European Union measures. This year, we have been briefing the European Commission and EU Member States on the failings of the current EU Directive as new regulations are being developed. Although some improvements to the draft European Union regulations have been made, these still fall far short of minimum international marketing standards. We will work with the UK Parliament and Members of the European Parliament on this matter.

When the new regulations have been made, they will need to be enforced in the UK. We have long experience of monitoring existing measures and taking cases to Trading Standards, the Department of Health and the Advertising Standards Authority. While we have won cases proving promotion has been misleading, the enforcement system cannot be said to be effective. Members of the new Parliament and new government will need to be briefed on the failings and what can be done.

We will continue to remind baby food company executives of their responsibilities. Our campaigns exposing and shaming companies do bring about some changes. For example, in the UK, Tesco removing an illegal promotion for infant formula earlier this year. Internationally, Nestlé dropped the claim its formula is the ‘natural start’ for babies. We will continue to promote the Nestlé boycott and DanoNO campaigns targeting the worst offenders.

We have long worked on international measures, such as food standards at the Codex Alimentarius Commission and so have particular insight to the risks post by TTIP (the Transatlantic Trade and Investment Partnership), which we are sharing with policy makers and partner organisations.

There is also the opportunity for a game-changing international treaty to hold corporations accountable for human rights abuses. For years we have been pursuing complaints against Nestlé in particular using non-binding measures and shown them to be ineffective. We were part of a successful campaign last year for the UN Human Rights Council to form a working group to draft a binding Treaty. Making this as strong as it needs to be will not be easy. So we will need your help.

The film Tigers will be in cinemas later this year. This is the outstanding new film from Oscar-winning director Danis Tanovic based on the true story of former Nestle Pakistan salesman taking on the baby milk industry with the help of IBFAN. It provides a great opportunity to show the reality of company practices and their impact – and the challenges that campaigners and the media face in exposing this. More than anything, it shows the need for protection of whistle blowers, such as Syed Aamir Raza, the real salesman, when they seek help from UN organisations responsible for protecting health.

You will be able to see Tigers in the UK at the Breastfeeding Festival screenings in New Brighton (Wirral) and Manchester at the end of June, where we will be present. Sign up on our special Tigers page for news of other screenings and let us know if you are interested in arranging your own.

If you want Baby Milk Action to be around to do this work, please think about making a donation – or become a member.