Today (28 April 2015) a Nestlé executive is due to be guest speaker at an event in Toronto, Canada, called “Better City Boot Camp” on the topic of nutrition in the first 1000 days from conception run by an organisation called CivicAction. Nestlé is trying to improve its image after Nestlé’s unethical marketing of baby milks was exposed at the Toronto International Film Festival last year with the  world premiere of the film Tigers, soon to  be on general release. 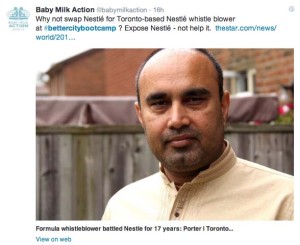 Tigers is based on the true story of a Syed Aamir Raza, who worked as a baby milk salesman in Pakistan, until he learned that babies fed on formula were dying and took action against Nestlé for encouraging health workers to recommend it to mothers. Aamir lives in Toronto now.

“Why not swap Nestlé for Toronto-based Nestlé whistle blower? Expose Nestlé – not help it”, we asked in a tweet to the #bettercitybootcamp hashtag (left). This is now featured on the Twitter page thanks to people sharing it.

Not everyone who supports these four-yearly events is happy that Nestlé has been invited.

A petition on Change.org calling for the invitation to Nestlé to be withdrawn alerted Baby Milk Action to the event and our Twitter campaign is exposing the facts Nestlé wants to cover up.

The Toronto Star (Canada’s largest newspaper) has an opinion piece today by Catherine Porter, who wrote the piece on Aamir, saying: “Nestlé is an ingredient CivicAction didn’t need”. She cites a 2012 study in Pakistan that found the practices from Aamir’s time continue, with health workers being targeted.

Babies in Canada might not be at the same risk as dying as in poor settings, such as Pakistan, but they are more likely to suffer short and long-term illness. Despite Nestlé claiming it now promotes breastfeeding, the top responsibility of its Nestlé Nutrition staff was made clear in a job description in Canada last year:

“Stimulate retail sales through the promotion of infant formulas and cereals to gain Healthcare Professionals recommendations.”

So that’s mission accomplished by getting Nestlé an invite to the CivicAction event. That is, unless campaigners turn it into an opportunity to expose Nestlé’s marketing practices and the true intention behind its hijacking of the first 1000 days message. 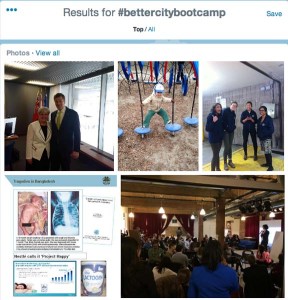 Tigers is based on what Nestlé calls an old case (even if the real sick babies in the film were filmed in 2013), but babies continue to die from unsafe bottle feeding, as a report last year from the Bangladesh Paediatric Association documents.

Bangladesh is a country where Nestlé promotes infant formula with the claim it is the “gentle start” for babies, telling investors the strategy is a “growth engine” for sales.

Our exposé of the Tragedies in Bangladesh and Nestlé’s marketing strategy is now a featured image on the #bettercitybootcamp Twitter page (preview from our forthcoming members’  newsletter, bottom left). People can keep it there by retweeting.

I showed the picture of a child who died from unsafe bottle feeding to the Nestlé Chairman, Peter Brabeck-Letmathé, and 2,446 shareholders at the company’s shareholder meeting this month (16 April) and asked him to stop promoting formula in Bangladesh with the “gentle start” claim and abide by the UN minimum marketing standards there and everywhere. He refused.

Nestlé shareholders re-elected Mr Brabeck as Chairman. But they cannot claim they did not know that he puts company profits before the lives of children through pursuing these marketing strategies.

CivicAction cannot claim it is unaware that Nestlé’s interest in the first 1000 days is promoting product solutions. That’s what Nestlé tells investors (left).

CivicAction refused to withdraw its invitation to Nestlé regardless. There will be a live stream of the event and people will be following on Twiter.

So let’s make this an opportunity to let as many people as possible know about what Nestlé is really doing.