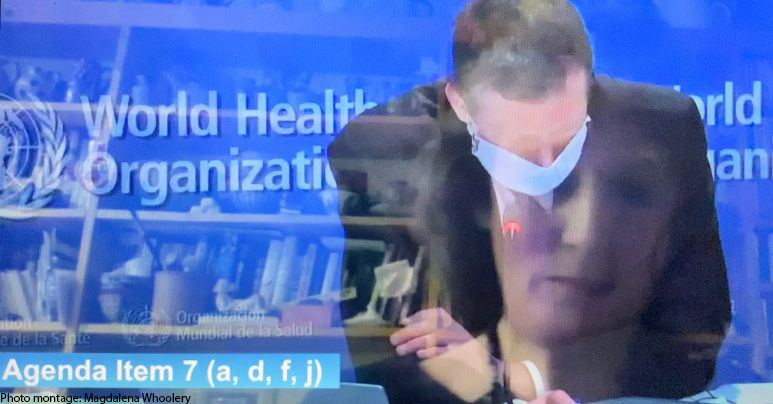 Baby food marketing on WHO’s agenda –  will the Civil Society voice be stifled?

WEBCAST of the EB    IBFAN STATEMENTS   Members of the EB

For the first time in decades IBFAN will not make an intervention on Maternal,  Infant and Young Child Nutrition (MIYCN) at a WHO governing body meeting this week. This is because of proposed new rules that demand only  ‘constituency’ statements on certain Agenda items. 2022 is a reporting year for Infant and young child feeding and IBFAN would be highlighting new risks from predatory marketing and the need for a strong statement from the 75th WHA to protect child health.

IBFAN and 49 international public interest Non State Actors (NSAs) have written to WHO DG, Dr Tedros Adhanom Ghebreyesus, and Member States, calling for the new rules to be abandoned: “Requiring joint statements to represent the views of broad constituencies of non-state actors inevitably homogenizes rich and diverse positions about public health issues and will silence critical debate in certain areas…. This situation tokenizes civil society’s presence in WHO governing bodies.”

The proposed rules have put us in an impossible position.  We cannot allow our statements at WHO Governing Body meetings to be moderated by corporate-funded groups or individuals who regularly support baby food industry positions. At the last Codex nutrition meeting, one of the chosen ‘constituency moderators’ defended industry’s lobby to allow flavourings on ultra-processed milk products for older babies. This was despite strong opposition from WHO, UNICEF, public interest NGOs and many countries, including the EU who questioned the safety of flavours and saw no technological need for them.  These products are unnecessary and deceptively labelled to look like infant formula and their unrestricted marketing  poses a serious hazard to child health and an unnecessary burden on the environment. (2)

The ban on individual statements also applied to another controversial issue, the need for Sustainable Financing for WHO that was discussed on Tuesday. The call for un-earmarked Assessed Contributions from Member States to be increased to cover 50-60% of WHO’s income is something most public interest Civil Society groups have supported for many years. But it was worrying that the only NSA speaker on this issue (representing several other bodies) was the UN Foundation. Although the statement contained several good points, it failed to address the need to correct and strengthen WHO’s Conflicts of Interest (COI) policy that fails to address institutional COI and excludes only weapons and tobacco industries (3).  Was this because the UN Foundation partners with a large range of corporations including Nestlé and Coca Cola and even tweeted a ‘Thank you’ to Nestlé for its $2.1m donation to the newly formed WHO Foundation  COVID19 Fund?

This blurring of boundaries between private/business and public spheres threatens WHO’s independence, integrity and trustworthiness and its capacity to fulfill its constitutional mandate.

2   DG Biennial Report on Maternal, infant and young child nutrition A soon-to-be published WHO report studied the reach and influence of marketing on infant feeding attitudes in eight countries: Bangladesh, China, Mexico, Morocco, Nigeria, South Africa, the United Kingdom of Great Britain and Northern Ireland and VietNam. The study demonstrated that marketing of formula milk is pervasive in most countries.

3. Under WHO’s highly problematic  Framework for Engagement with Non State Actors (FENSA) adopted in 2016,  NGOs, private sector entities, philanthropic foundations, and academic institutions are referred to together with the term Non State Actor (NSA). FENSA  identifies only Arms and Tobacco industries as Conflicts of Interest.  See  also IBFAN comments on WHO NCD Tool.

Further reading: Defending and Reclaiming WHO’s Capacity to Fulfil its Mandate: Suggestions from a Perspective of Language and Power  Judith Richter

“The most alarming finding in our research is a very large proportion of greenhouse gas emission impact is associated with the so-called growing up milks or toddler formula … In China, nearly half of the sales of milk formula is toddler formula. For the UK alone, carbon emission savings gained by supporting mothers to breastfeed would equate to taking between 50,000 and 77,500 cars off the road each year”.

For more: The manufacture of breastmilk substitute products is pumping tons of CO2 into the atmosphere. Dr. Julie Smith, Hon Ass Prof, Australian Centre for Economic Research on Health.

Agenda Item 7. Political declaration of the third high–level meeting of the General Assembly on theprevention and control of non–communicable diseases.We will be calling on WHO to strengthen its inadequate Conflict of Interest safeguards and help Member States who are working on Universal Health Coverage (UHC) and Non Communicable Disease prevention (NCDs).  At present, WHO excludes only tobacco and arms industries.   (See IBFAN’s comments on Pivate Sector interactions  IBFAN NCD Tool FINAL

Agenda item 15 Public Health Emergencies: preparedness and response.  See IBFAN Statement. We will be highlighting that breastfeeding is lifesaving in emergencies and babies are at greatest risk of water-related diseases, with diarrhoeal disease the second biggest killer of under-fives; that breastfeeding is resilient and provides food, care and immune support, and protection from the worst of emergency conditions;  that epidemics and pandemics, such as HIV, ZIKA, Ebola and COVID-19 have had a profound impact on infant and young children’s feeding practices; (click here for evidence of  bad national guidelines) that commercial exploitation of emergencies and continued harmful donations of breastmilk substitutes  are serious risks to child survival; that the climate crisis is fundamentally linked with health outcomes and that  interventions during emergencies must not undermine sustainable food production, food security and biodiversity.  (See materials from Infant Feeding in Emergencies (IFE)Core Group)

Agenda Item 17 Maternal,  Infant and Young Child Nutrition (MIYCN): Because of changes in the rules for making interventions – see Agenda Item 21.2 below –  this maybe the first year in decades that IBFAN will not make an intervention on this topic.

The MIYCN report covers many important threats to child health and 2022 is a reporting year for the International Code  and Resolutions.  As usual IBFAN will be calling for strong safeguards against predatory marketing in all forms, including e-commerce and the growing market for sweet-tasting, fruity-flavoured ultra-processed milk drinks for older babies that are packaged to look like infant formula. These products will debated again at the Codex Alimentarius Commission in 2023 so a strong Resolution from the World Health Assembly in May would help Member States tackle all these problems.

The report highlights the need for governments to tackle conflicts of interest and the  onslaught of digital marketing targeting parents and care-givers. Unless idealising and aggressive marketing is ended parents will continue to believe that over-packaged and environmentally harmful products are healthier than continued breastfeeding and biodiverse culturally appropriate nutritious family foods.

Agenda Item 18. WHO global strategy for food safety.  IBFAN welcomes the new Global Strategy for Food Safety but questions whether it is adequate to combat the risks and dangers faced by the world’s smallest consumers whose immature immune systems lead to increased health vulnerability. The interests of infants and young children are the least represented in the draft text and there is scarce mention of the importance of breastfeeding or the risks of artificial feeding. These most vulnerable consumers have no voice or say in the matter, yet face risks to their survival and healthy development from emerging pathogens, evolving viruses, increasing antibiotic resistance and global warming. IBFAN will call for a strengthening of the framework to protect children against unsafe foods and feeding methods. See IBFAN letter to WHO.

Agenda Item 19.3. The need for Sustainable Financing for WHO.  Following an informal civil society dialogue meeting about WHO funding in December,  the Director General and a former vice-chair of the WHO Executive Board (Mr Björn Kümmel, cc.)  called on Civil Society  to advocate to WHO members states that assessed contributions to WHO should be substantially increased.  This is something  that all public interest NGOs and most Member States have been calling for for decades. Such a shift that would improve WHO’s ability to follow its core mandate and not waste staff time chasing after endless ear-marked funds.

EXTRA INFORMATION about he importance of the International Code and biennial reporting.

Declaration of the G20 Health Ministers in September 2021  (1) “Aligning with the recent WHO-UNICEF “Statement on the 40th anniversary of the International Code of Marketing Breastmilk Substitutes” we welcome the 40th anniversary milestone as an opportunity to celebrate the progress made in promoting and supporting breastfeeding but also a reminder of the work still to be done. A shared effort and responsibility are needed to recover from the impact of COVID-19 pandemic and continue progress with the aim of improving breastfeeding rates, and call to create an enabling environment that allows women to be informed of their options and supported throughout the entire breastfeeding experience.” G20 2021Health Declaration

Note on the  Human Rights implications.  UN CRC General Comment no. 15 and 16 (2013) and UN ECOSOC General Comment no. 24 (2017) in combination with International Court of Justice Judgement of 30 November 2010 concerning Ahmadou Sadio Diallo (Republic of Guinea v. Democratic Republic of Congo). Also see Extraterritorial Obligations and the Code_Feb 2018 Discussion paper, February 2018 The Maastricht Principles on Extraterritorial Obligations of States in the Area of Economic, Social and Cultural Rights and the International Code of Marketing of Breastmilk Substitutes

IBFAN statement 10th November 2020.  71st WHA  IBFAN considers the proposed draft Decision on Maternal, infant and young child nutrition to end the biennial reporting in 2030 to be a misinterpretation that leads to an unacceptable risk. Harmful commercial promotion – especially in countries without effective laws and further exacerbated by the COVID, undermines WHO messages, misleads parents and threatens child survival and health.  Biennial reporting is a core part of the International Code and should only end when there is convincing evidence that countries have adopted effective legislation that is independently monitored and that harmful marketing has been eliminated. There is no evidence that companies will abide by voluntary codes unless they agree with them, so harmful marketing will not stop until then – it is too profitable! While acknowledging the many important issues on WHO’s agenda, the sun–setting of one of WHO most effective and essential safeguards of children’s right to health conflicts with WHO’s fundamental purpose. If WHO is going to sunset its decisions, then please focus on the ones that are doing little or nothing to protect health. We treasure our collaboration with WHO on this work so far – it has been life–saving. Please continue to value the Code, recognise these risks and warn Member States to safeguard their policy–making from inappropriate partnerships, Member States use Assemblies to share concerns and adopt Resolutions that clarify, strengthen and update the original Code and 19 Resolutions have been adopted since 1981. This shows that the Code is far from the dead issue and why baby food companies want it taken off WHO’s agenda. The 2020 joint WHO/UNICEF/IBFAN global report shows that 70% of countries analysed have some form of legal measure on the International Code, however, under pressure from industry and trade bodies, far too many laws contain dangerous loopholes or rely on the voluntary cooperation of the companies.  Thank you once more.

NB: WHO has revamped its website layout so links are broken: here is the International Code of Marketing of Breastmilk Substitutes and the 19  World Health Assembly  Resolutions and Decisions that have been passed since 1981.

2 thoughts on “Baby Food marketing on WHO’s agenda – will the Civil Society voice be stifled?”