Promoting a “Bottle- feeding” culture is NO good for us

29.April.2020, New Delhi : According to the WHO guidance a woman with Covid should be  supported to breastfeed her baby safely, hold her skin to skin and share room with her baby. Covid positive mothers should follow personal respiratory hygiene , wash hands before and after touching the baby and regularly clean/disinfect frequently touched surfaces.

But, the recent ICMR guideline which suggested “temorary separation” of the mother and baby has confused the health care workers and mothers and has led to practice of separating the babies from mothers who are  suspected or confirmed SARS-CoV-2 virus positive.

On 15.April.2020 Union Health Minister Dr.Harvardhan tweeted a video on Twitter, where in two nurses in PPE were feeding a baby through bottle because the baby was separated from his for SARS-CoV-2 virus positive mother (no way to know what was in the bottle; infant formula or expressed breastmilk). This news was all over in newspapers giving different versions.

The Breastfeeding Promotion Network of India (BPNI) a  3 decades old non- profit watchdog organization that works to protect, promote and support breastfeeding wrote a letter to Dr.Harvardhan on 17.April.2020 drawing his attention to issue and requested to withdraw histweet showing bottle -feeding baby, and urged ICMR to tweak/modify its guidance according to international standards that in no way undermines breastfeeding.

In response, the Ministry of Health and Family Welfare provided BPNI with a set of guidelines as their stance on the issue of separation of mother and baby.It essentially conveyed that ideally the mother and newborn should not be separated, should continue skin to skin contact and initiate breastfeeding within first 60 minutes after the birth with precautionary measures of respiratory hygiene. Based on the clinical condition of mother and newborn, the decision might be taken on case to case basis.

On 26.April.2020 Amitabh Bachchan, famous bollywood star tweeted an audio visual message of humanity for the nation, which was conceptualised and produced by Saathiya Movie fame Shaad Ali under his production house Hectic Media Pvt.Ltd. The message goes on to use the video of two nurses in PPE feeding a baby with the bottle , mother is no where seen.

BPNI believes such communication can convey wrong message to people, and this practice of separation could be more harmful than Covid as the baby misses out potential protection of breastfeeding.

Though the message binds the nation towards compassion for fellow beings, its ending visual promotes and normalises separation of newborns from covid positive mothers. This carries a major communication disadvantage.

BPNI urges Sh. Amitabh Bachchan and Shaad Ali to replace the bottle- feeding visual from the humanity video with a breastfeeding visual or Nurses/doctors assisting mothers to breastfeed in covid times. This change would be hugely beneficial to health systems and society.

BPNI also, urges Dr.Harvardhan to issue clear instructions to the health facilities to avoid bottle-feeding, and make use of a cup for feeding expressed milk or infant formula on doctors’s prescription. 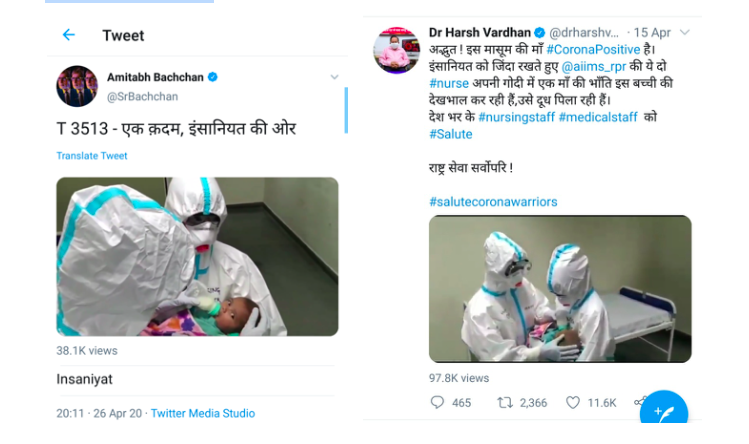