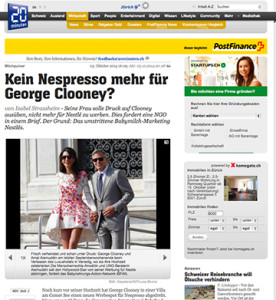 20 Minutes –  unofficial translation from an article in German that appeared in the Swiss Paper  20 Minutes.

No more for Nespresso for George Clooney ?

Shortly before his wedding, George Clooney has starred in a new commercial for Nespresso in a villa on Lake Como. Was this in vain? The organization International Baby Food Action Network (IBFAN) calls on the newly married to cease his advertisements for Nestlé. In a letter to Clooney and his wife, the human rights lawyer Amal Alamuddin, IBFAN will refer to the critique of the marketing of Nestlé baby milk in third world countries , which can lead to the death of infants.

“We are preparing a letter which will appeal to both to stand up for the babies in the world and not to continue supporting Nestlé,” said Lida Lhotská of IBFAN to 20 Minutes. She had come on Wednesday night to the Swiss premiere of the film “Tigers” to the Zurich Film Festival . A film that raises bitter accusations against Nestlé over its marketing practices of baby milk in Pakistan. While the screening met in Zurich initially with little interest, the film could, however, trigger a new discussion about the marketing of the multinational in this sensitive area.

The Oscar-winning director Danis Tanovic shows weeping mothers and their infants, emaciated beyond recognition and dying, in a scene recorded in a Pakistani hospital last year. The accusation: instead of breastfeeding their children, mothers, seduced by aggressive marketing, resort to bottle-feeding. Milk powder mixed with dirty water is the reason for the deadly diarrheal disease of infants shown. In many places, access to clean drinking water is a problem.

What is so special about the movie is that it tells the story of a former Nestlé employee in Pakistan. Probably the only whistleblower from inside the multinational company, who reported about his practices as baby milk salesman with doctors and hospitals in Pakistan. “The allegations made ​​in the film do not in any way correspond to reality,” says a spokeswoman for Nestlé to 20 Minutes. “The events described in Pakistan date years back and present facts about our activities in a strongly distorted way.”

In Toronto, movie much celebrated The children’s agency UNICEF ​​estimates that the deaths of more than 800,000 infants could be prevented in developing countries, especially through breastfeeding instead of bottle-feeding. Already in the 70s there was a scandal about baby food. Nestlé was accused of convincing mothers in Africa to believe that milk powder is better. “Tigers” asserts that the scandal continues, and indeed worldwide. Nestlé, on the other hand, refers to its strict internal guidelines for counseling parents how to prepare baby food safely. At the International Film Festival in Toronto “Tigers” had been much celebrated. A special feature in this movie is that the filmmaker anticipates possible legal complaints lodged by Nestlé: It shows again and again discussions with a lawyer about deficiencies in evidence for the allegations by the Whistleblower. “The chain of evidence is not waterproof,” says for example the lawyer in the film. George Clooney faced already several times harsh criticism because of his Nespresso advertising. Among other things, he was blamed as capsule coffee was not at all environmentally friendly.