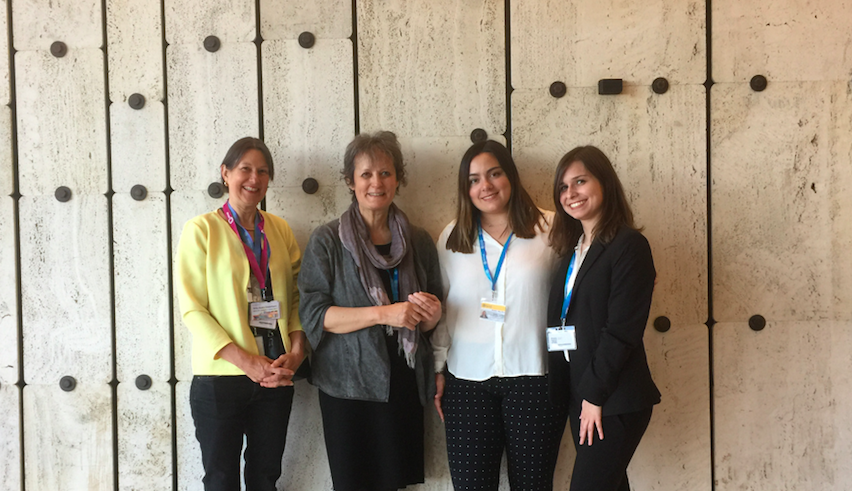 With Fedora Bernard, Katie Campbell, Britta Boutry Stadelmann IBFAN’s team is covering this year’s World Health Assembly that is taking place in Geneva from 20-28th May. It will be followed by a 2-day meeting of the Executive Board (EB).  You can find all the papers and links to live webcasts here

IBFAN will do what we can to protect breastfeeding while warning WHO of the risks of getting too close to corporations and the need for a sound Conflicts of Interest (COI) policy.  A policy that will address WHO’s own institutional COI.

WHO Reform will come up at the EB (WHO’s relationships with NGOs and the Private Sector – lumped together and now called  Non State Actors).  See related press articles: worrying idea for a new ‘WHO foundation’.    WHO Reform 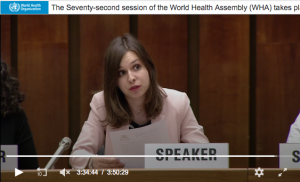 As a global network that protects breastfeeding, IBFAN is pleased to comment on this important topic.

Breastfeeding is a lifeline in emergencies. Babies are born with an undeveloped immune system and are at greatest risk of water-related diseases – with diarrhoeal disease the second biggest killer of under-fives. Breastfeeding provides food, care and immune support, and protects them from the worst of emergency conditions.

Despite this, all too often emergency responses are characterized by unsolicited donations of baby feeding products. This does not only put infant health at risk but also hinders women empowerment. Public appeals for funds often make this worse – with starving babies shown alongside the myths used by the baby food industry. Rarely do they highlight the resilience of breastfeeding or that artificially fed babies face many more risks to survival.

IBFAN’s World Breastfeeding Trends Initiative assessments show that implementation of UN recommendations on this is dismal. WHO can play a key role in reversing this situation by promoting the  Infant and Young Child Feeding in Emergencies – Operational Guidance for Emergency Relief Staff and Programme Managers, which is designed to give all those working in emergencies guidance on appropriate infant and young child feeding and ensure that when breastmilk substitutes are required they are purchased, distributed and used according to the UN’s agreed strict criteria.

We welcome the IOAC recommendation that WHO establishes long-term relationships with key NGOs on the ground and hope you will guard against COI and we look forward to working with WHO to ensure that families in emergencies have the support and protection they need. 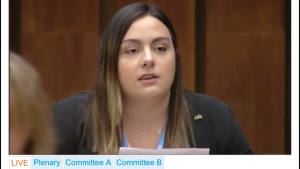 As one of WHO’s longest-standing public interest partners, whose primary concern is to protect breastfeeding and child health, IBFAN strongly supports the efforts of Member States to ensure publicly funded UHC,  with primary health care and prevention as a foundation.

It is worrying that many governments are now under attack from those pushing privatised systems, who pay no attention to how easily these can sabotage  public health goals.

Innovative arrangements that can genuinely advance health are to be welcomed –  but they must be carefully screened and monitored by truly independent bodies, without corporate involvement. Public Private Partnerships and Multi-Stakeholder arrangements inevitably lead to private sector involvement in health care planning,  Corproate access to personal data, and most importantly privatisation of services. WHO knows well how easily this can happen, especially in the infant and young child feeding arena.

While WHO cannot police what happens at country level, it does have an obligation to warn Member States of the risks of inappropriate commercial involvement and how to avoid – not just manage – them.  Indeed WHO now seems to fear being seen as ‘risk averse’ more than being seen as cavalier, even negligent.  We call on WHO and Member States once again  to protect their independence, integrity and trustworthiness and provide Member States with the reliable and independent evidence that shows clearly that public provision of services is the only way to achieve health for all. This issue  is a slippery slope that needs to be navigated very carefully and WHO has a key role to play in getting it right.

Lastly, as a priority, Member States, must monitor and ensure full policy and programme support to the protection, promotion and support breastfeeding, including it in the indicators of monitoring SDGs 2/3 and ensuring full implementation of the International  Code and resolutions, maternity protection and universal Baby Friendly Hospital Initiative.

IBFAN welcomes the opportunity to comment on the draft strategy on health,  environment and climate change.

Much more should be done to protect, promote and support breastfeeding, a practice that has no carbon footprint, contributes to water conservation and helps in the reduction of air pollution.  While we are calling for reduction of avoidable environmental risks, global sales of breastmilk substitutes increase rapidly every year, boosted by sophisticated marketing techniques against which breastfeeding cannot compete. These products are, of
course, necessary for babies who are not breastfed, but they need energy to manufacture, materials for packaging, fuel for transport distribution and water, fuel and cleaning agents for daily preparation and use, and they generate Green House Gases.  Between 11-25 kilos of CO2 and more than 4000 liters of water are estimated to be needed along the production pathway to produce just 1 kg of BMS powder. If breastfeeding was considered a public health intervention for climate change prevention and mitigation, more would be done to end misleading marketing of baby food companies and support women who want to breastfeed.

At the very minimum, all governments should fully implement the International Code of Marketing of Breastmilk Substitutes and relevant WHA Resolutions. We regret that goal 12 of the draft strategy does not include the requirement that national and local governments set up proper safeguards against conflicts of interest and commercial
influence when facilitating “cross-sectorial cooperation”. Like other green priorities, supporting new parents with breastfeeding now, will benefit future generations.

As an NGO that has attended Codex meetings for more than 20 years, IBFAN is pleased that WHO is providing evidence to support the strengthening of Codex trading standards and texts to minimize and contain antimicrobial resistance throughout the animal and food chain, including through processing.  We hope that all Member States will recognize that this is a threat to global health security that no country can eliminate on its own and that there are inevitable implications for global trade. Codex is a difficult fora that is dominated by powerful corporations and industrialised countries that protect their interests. WHO needs to be there and strong to protect the global health goal in these complex negotiations.

The prevention of NCDs requires us all to tackle the power of corporations and their threat to public and planetary health.

WHO’s proposals rely on a mix of regulatory approaches alongside voluntary commitments and self assessments that are to be monitored by a consortium of institutions. This is a major undertaking that risks WHO’s name being exploited for public relations purposes. Indeed, some of the named institutions work closely with the companies on the presentation of their findings.

IBFAN recommends that WHO focuses on its own internal conflicts of interest and sends a clear message that binding regulations, independently monitored using public funds are what’s needed.  Governments cannot be in the driver’s seat and at the same time in a corporate partnership.

WHO’s  baby food marketing and conflicts of interest rules and the British Medical Journal’s recent decision to stop all baby formula adverts – are important models that could be followed by all.  WHO’s work at Codex trading standards is also critically important..

IBFAN has worked alongside WHO for about 40 years and has followed WHO’s reform process, often with alarm.
In our experience, when WHA resolutions are translated into legislation, properly monitored, implemented and defended at Codex, they really can and do protect health and have probably saved millions of lives. There is no need to reinvent the wheel. The baby food issue can be used as a model wherever human health is under threat from harmful marketing practices. The call for increased engagement and partnerships with entities that caused these threats will not help. It will lead to misplaced trust, image transfer, confusion and a weakening of resolutions. To stop the public good being subverted, WHO must remind governments that effective legislation, not here-today-gone-tomorrow voluntary commitments, is what’s needed.
We disagree with the statement in report 145/4 that WHO’s constitution ‘forsees’ the participation of NSAs in WHO’s governing bodies. WHO’s basic documents have always been clear that NGOs must be “free from concerns that are primarily of a commercial or profit-making nature.” This is one important reason why FENSA must be evaluated. In allowing Businesses and Philanthropies to enjoy Official Status, WHO has taken a huge leap into the dark. It is vital that the risks of such a fundamental change be evaluated, acknowledged and addressed.
WHO has a constitutional duty to consult with civil society as rights holders. Corporations do not have these rights. The term “non-State actors” makes it impossible to see what’s really happening and who is really working for the public good. We even all wear the same colour badges. It also places a huge strain on WHO’s due diligence process.
WHO is clearly under pressure to be less ‘risk averse’, to use FENSA as an enabling framework for undue public-private entanglements, to not bother correcting its own Conflict of Interest definition.[1] We call on WHO to resist such pressure, stay within its constitutional mandate, safeguard its independence, trustworthiness and integrity and its unique role as the coordinating authority in setting global health norms. Civil society is there to help.

(1) WHO definitions confuse conflicts of interest within an institution or person with conflicts between actors who have diverging or fiduciary duties (which in the case of corporations is to maximise profits).