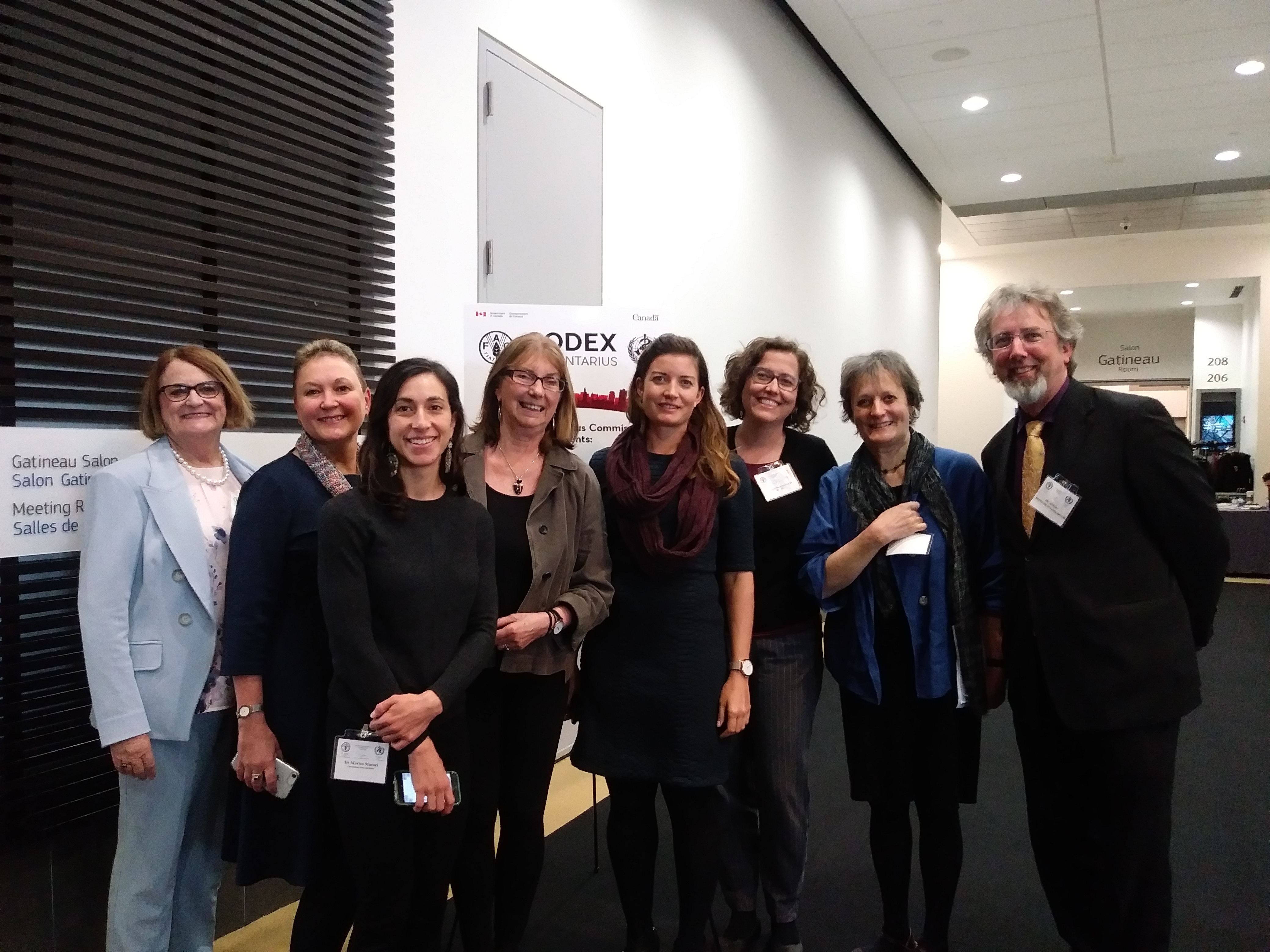 I will be posting a longer report soon, but in summary, this was a very successful week.  The Bio-fortification definition was not agreed – indeed all the Member States that spoke on this topic were not happy with it – recognising its risks –  so it will not be discussed at Codex again.  The Cross Promotion sentence proposed for Follow-up formula labelling, that the US and several other Member States wanted deleted, was not and will be sent back to the Nutrition committee in Germany for further discussion.

The report prepared by Codex is HERE

For the meeting this week, I wore the hat of European Network of Childbirth Associations (ENCA) The IBFAN team – Betty Sterken and I mainly covered the following  topics.

The Nutrition meeting in Berlin last year (CCNFSDU) decided to hold the work at Step 4, and to forward the definition (see Appendix II below)) to the Codex Committee on Food Labelling (CCFL) with a request:

IBFAN is calling for the work on the biofortification definition to be stopped – it is unnecessary, misleading and pure marketing.

Participants are forbidden from recording the proceedings of the CCNFSDU when it sits in Germany. [1] As a consequence the report writing is a tortuous procedure – full of  claims and counter claims of what was or was not said. There is a distinct bias in favour of the definition and none of the critical NGOs were called to speak during the debate. The NGOs promoting the definition (Harvest Plus) was given the floor several times and kept suggesting that consensus had been reached.  Only after several complaints from those Member States and NGOs opposing the definition was the following text (Para 80)  inserted into the report (our emphasis)

–     The proposed definition is not clear. Conformity with the definition could not be verified as there were no criteria for measuring or expressing “significant amounts increased” stated in the definition. The absence of means to verify the compliance of labelled products made the definition impossible to realise and would create confusion to consumers.

–     The proposed draft definition was too broad, and would allow the inclusion of genetically modified organisms; and this would thus lead to deception of consumers.

–     The lack of a harmonized approach due to substantial flexibility could undermine the value of this work.

–     The term “bio” was exclusively dedicated to organic production in some countries and therefore the introduction of the term biofortification, which included foods not produced organically, would be problematic; and that no single alternative/equivalent term had been identified.

–     Without answering the questions from CCEXEC70 as to where the definition would be best placed and how it would be used, the Committee was not in a position to make further progress.

IBFAN made additional points in its written comments:

Biofortification1 is any process2 other than conventional nutrient addition to food3 whereby nutrient content is increased or become more bioavailable in all potential food sources4 for the intended nutritional purposes5.

1) Some Member governments may prefer to use an equivalent term.

2) Process to be determined by the competent national/regional authority

– Preventing/reducing the risk of, or correcting, a demonstrated deficiency in the population;

– Reducing the risk of, or correcting, inadequate nutritional status or intakes in the population;

– Meeting requirements and/or recommended intakes of one or more nutrients;

– Maintaining or improving health; and/or

– Maintaining or improving the nutritional quality of food.

[1] There seems to be no legal basis for this decision made by successive CCNFSDU Chairs.