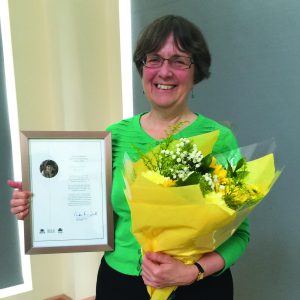 The Baby Feeding Law Group is seeking nominations for the Julie Crawford Award for Breastfeeding Support. Nominations must be sent to Baby Milk Action (BFLG Secretariat) by 3rd May  2017

On the Right is Rosemary Brown, winner of the 2016 Award.

Criteria for the Award

Nominees must have demonstrated an awareness and commitment to the protection and defence of breastfeeding, facilitating universal access for support that is independent of commercial influence.

To help publicise the call for nominations, please share the link:

Information on the nomination and award process is given below.

In November 2001, Julie Crawford died from a rare disease, at the age of 42. Julie was a health visitor and a former Director of Baby Milk Action. She cared passionately about breastfeeding and was never frightened to stand up and fight for the rights of mothers to independent and sensitive care. Julie was especially concerned about the extent of industry funding of education for health professionals and was also keen to push for legal action in defence of mother’s rights to breastfeed. She was one of the first health visitors to participate in the International Breastfeeding Course at the Institute of Child Health (self-funded, since employers could not find the resources).

In 1992, she wrote in the Joint Breastfeeding Initiative newsletter about the barriers to breastfeeding support from within the health visiting and midwifery professions – where so many had not had adequate training and so many had not had adequate support for their own breastfeeding experiences and the chance to discuss the feelings this left them with: “there is no safe forum in which to reach some understanding”.  Julie also noted that “many health professionals endorse expectations of infant behaviour which damage breastfeeding” and called for “articulate voices” to promote change for mothers and for health professionals.

Please see the above criteria and send us a few paragraphs (around 300 words) about why you think your candidates should win. Bear in mind that this is not an award for straightforward breastfeeding support. They should also play a role in protecting parents from commercial influence (marketing, promotion); aspects that are not always obvious.

It’s not necessary at this stage for your candidates to know that they are nominated, but unless you know them well, it may be easier to write something about them if you have their cooperation. It would be helpful to the judges if you could provide contact details of someone who is willing to second your nomination.

Where to send your nomination

Please remember to include contact details for yourself and your candidates (including where they work) and where possible the contact details of someone who is willing to second your nomination.

If you have any questions do not hesitate to contact Jennie at the above address or by telephone 01223 464420.

Nominees will be informed of the status of their nomination and whether they have been shortlisted for the award.

The winner will be notified in early April  2016. We hope that they will be able to attend the Baby Milk Action AGM on 23rd April to receive the Award.

The nomination period is open until 3rd May 2017