Update 1 August 2013: Apparently stung by criticism of taking a Nestlé paycheck, George Clooney told the Guardian: “Most of the money I make on the [Nespresso] commercials I spend keeping a satellite over the border of North and South Sudan to keep an eye on Omar al-Bashir [the Sudanese dictator charged with war crimes at The Hague].” However, he is now defending Nestlé from criticism of its coffee business. 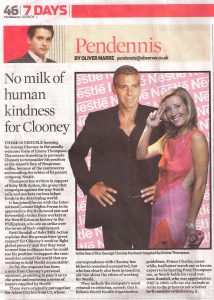 Coverage: Marketing Week,
The Observer reports on Mr Clooney sharing a pack of Nestlé’s documents with Emma Thompson when she raised concerns (click on image for larger version).

People have complained to us about George Clooney, actor and human rights campaigner, appearing in advertisements for Nestlé coffee. Gaining access to an A-list Hollywood star has proved problematic, but Mr. Clooney was put on the spot about this at the Venice film festival today as he took part in a press conference about his latest role. Ironically he plays a lawyer caught in a moral dilemma – and mortal danger – when called on to defend a company against a lawsuit over its practices.

Asked about his real-life role in the Nestlé Nespresso advertisements, Mr. Clooney said he did not work for Nestlé, according to ABS-CBN which reports he said unsmilingly: “I’m not going to apologize to you for trying to make a living every once in a while. I find that an irritating question.”

The report refers to the controversy over Nestlé’s marketing of baby foods, and the boycott ‘in the late 1970s’. The boycott was re-launched in 1988 as Nestlé failed to abide by commitments made that led to the end of the first boycott in 1984.

The second boycott has forced some changes in policy and does stop specific cases of malpractice, but monitoring shows Nestlé continues to violate the international standards for baby foods more than any other company as it promises to build significant year-on-year growth in sales. Nestlé has repeatedly rejected a four-point plan put to it by boycott coordinators to save infant lives and ultimately end the boycott.

Even Nestlé’s Global Public Affairs Manager, Dr. Gayle Crozier Willi, acknowledged in April this year that Nestlé is ‘widely boycotted’ after an independent poll found it to be one of the four most boycotted brands on the planet.

Where work by Baby Milk Action and its partners for independently monitored and enforced legislation implementing the marketing requirements has succeeded, Nestlé´ánd other companies abide by the international standards, so it is not impossible to comply. The boycott helps to compel it to change its practices where legislation is not yet in place.

“Let us hope Mr. Clooney will be prompted to investigate this issue and support the boycott in future to keep up the pressure on Nestlé to change.”

“What do Nike, Coca Cola, McDonald’s and Nestlé have in common? Apart from being among the world’s most well-known brands, they happen to be the most boycotted brands on the planet. That finding came from this week’s global GMIPoll, an online opinion poll that surveyed 15,500 consumers in 17 countries. Nestlé emerges as the most boycotted brand in the UK because of what respondents consider its “unethical use and promotion of formula feed for babies in third world countries.”