Click Here for the background papers on the website of the Royal College of Paediatrics and Child Health (RCPCH).
The news that the postal vote approved RCPCH acceptance of formula sponsorship is really disappointing, especially since the College is a much valued member of the Baby Feeding Law Group.  However we welcome the support of the hundreds of  paediatricians who called for such funding to be refused.
We also note that many of those who agreed to accepting funding called for extra safeguards that would ensure that such funding is only accepted from companies found not to be “in breach of required codes of conduct.”  On this basis, according to IBFAN’s monitoring globally and in the UK, exhibitors such as Nestlé, Mead Johnson, Abbott and Danone – who all regularly violate the International Code and World Health Assembly Resolutions – should be excluded in future.
We were worried that the phrasing of the questions used for the postal vote implied that the RCPCH has strict and effective due diligence procedures. Sadly our experience does not support this. For example in the April Conference, even though companies were told categorically to restrict promotion to specialist formulas, Nestlé promoted the SMA brand through standard formulas such as SMA Comfort. (See leaflet below). 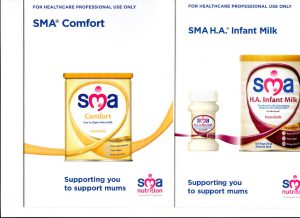 Knowing how skilled the baby food companies are at getting around rules that regulate their marketing, it is important that any procedures adopted by the RCPCH are thorough.   Confining promotion to specialised formulas is, unfortunately,  no real safeguard. While milks marketed as Foods for Special Medical Purposes (FSMP) can be necessary products for specific disease states, their misleading promotion has been a major concern that has led to the medicalisation of normal infant feeding occurrences. Now even the European Commission is seeking to stamp it out with new legislation. FSMP (1) FSMP BriefingFINAL
The College has a critically important role to play in the protection of child health and a duty to maintain its credibility, independence and trustworthiness.  Over the years the RCPCH has supported the campaign to implement United Nations’ marketing rules, namely the International Code of Marketing of Breastmilk Substitutes and subsequent relevant WHA Resolutions,  it is sad that in this instance seems to have forgotten that  these rules also prohibit sponsorship by baby feeding companies.
We hope that this decision will not set the clock back, and that the effectiveness of the new rules will be regularly reviewed.
For more information about the way companies mislead health professionals download the First Steps Nutrition Report:
Scientific and Factual: A review of Breastmilk Substitute advertising to healthcare professionals. 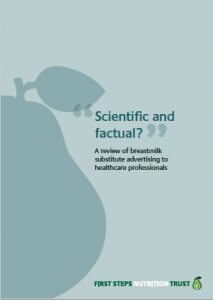 (1) The FSMP Regulation is now in force, but will apply from 22nd February 2019, except in respect of food for special medical purposes developed to satisfy the nutritional requirements of infants, to which it shall apply from 22nd February 2020: COMMISSION DELEGATED REGULATION (EU) 2016/128 of 25 September 2015 supplementing Regulation (EU) No 609/2013 of the European Parliament and of the Council as regards the specific compositional and information requirements for food for special medical purposes

The Infant Formula and Follow-on Formula Regulation is in force, but will apply from 22nd February 2020, except in respect of infant formula and follow on formula manufactured from protein hydrolysates,  to which it shall apply from 22nd February 2021:   COMMISSION DELEGATED REGULATION (EU) 2016/127 of 25 September 2015 supplementing Regulation (EU) No 609/2013 of the European Parliament and of the Council as regards the specific compositional and information requirements for infant formula and follow-on formula and as regards requirements on information relating to infant and young child feeding

Media coverage of this story:

Re: Paediatricians vote for college to continue accepting funds from infant formula companies

Right from our undergraduate days in medical school we were taught to stay away from the infant formula companies. In spite of very strict regulations from the medical and paediatric associations the companies kept coming back to the medical schools in the form of conducting quiz and sponsoring academic programs for the students. After my post-graduation I worked in a remote rural hospital in Andhra Pradesh a southern state in India. The gate keeper at the hospital would not allow the representative if he learns that he comes from a formula company. The pressure was built from all the corners, the government, professional bodies, paediatricians and the public. Currently the Indian Academy of Paediatrics, the Indian Medical Association and the Pakistan Paediatric Association does not accept funding from formula companies and setting an example for developed nations. [1]

However I see a different situation in developed economies. The recent vote by the Paediatricians to continue accepting funds from infant formula companies by the college surprises me. [2] The professional bodies of the developed nations should set an example for developing economies. I have personally witnessed the companies coming to doctors saying we have been endorsed by these bodies from overseas. The practitioners who are in remote areas of developing countries for whom the only source of some new information are these representatives and the doctors get influenced or misinformed.

In an era of social media and frequent cross border travelling and immigration it is important that the professionals and professional bodies have some consistent approach as these companies have global presence. The decision taken in London has the potential to influence the medical practices in little towns in India and Africa. I recently came across an immigrant mother who asked me why the paediatricians in India were so much against formula where it is easily accepted overseas. The recently published (WHO) guidance on ending the inappropriate promotion of foods for infants and young children clearly states that caregivers receive clear and accurate information on feeding. [3]

The key question is why would an Industry support the college’s work without having a conflict of interest?

The Royal College of Paediatrics and Child Health (RCPCH) has rejected calls from its membership to stop accepting funding from formula milk companies.

Instead, it will continue to allow funding under clearly pre-specified conditions with a rigorous and robust set of safeguards in place, which it said the majority of its members had supported in a consultation. The council of the college announced the decision along with the results of the consultation, which had a 16% response rate (2522.)

The college said in a statement, “RCPCH consulted its members on its relationships with formula milk companies (FMCs). The majority of those that responded felt that the college should accept funding from FMCs and allow them to advertise at conferences and events, but only with a robust set of safeguards in place. This decision was subsequently ratified by RCPCH council.

“RCPCH has a due diligence document with a series of policies that will inform decisions on whether or not to accept FMC funding. These policies are publicly available and contain robust criteria to ensure that the RCPCH retains its reputation as an unbiased, independent educator and advocate for child health.”

Neena Modi, president of the college, told The BMJ that the decision would mean that the college’s annual conference would no longer have a “headline” sponsor by a baby milk manufacturer. Instead, a new “Children’s Fund” will allow industry to support the college’s work without having a conflict of interest. And policies on funding for education and research projects will allow funding from FMCs as long as strict conditions are met.

In April, 66 delegates at the RCPCH’s annual general meeting voted in favour of a motion that urged it to decline any commercial transactions or other funding from all companies that market breast milk substitutes.1

Patti Rundall, policy director of the campaign group Baby Milk Action, said that the results of the survey were “really disappointing” but emphasised that hundreds of paediatricians had voted in the consultation to reject any funding by FMCs.

“We really hope that this decision will not set the clock back and that the effectiveness of the new rules will be regularly reviewed,” said Rundall.

Charlotte Wright, who had proposed the April motion, said that she was very unhappy, as she and others believed that the college was misleading members about the probity of its actions.

She criticised the members’ survey, saying, “It was a very confusing and badly designed survey, the wording of which was not consulted on and which gave the very biased impression that ‘due diligence’ would avoid the possibility of accepting inappropriate funding.

“The recent World Health Assembly resolution very clearly stated that professional organisations should not accept any funding from formula milk firms—not that it was fine after ‘due diligence.’ This was the chance for the RCPCH to take an ethical lead, and they have opted instead for more income at the price of children’s health.”

WHO code on infant formula

The World Health Organization has tightened its code on marketing breast milk substitutes, and in May the World Health Assembly recommended that health professional associations and non-governmental organisations should not “accept gifts or incentives from such companies . . . or allow such companies to sponsor meetings of health professionals and scientific meetings.”2

The World Health Assembly welcomed the new guidance because it clarifies that, to protect, promote, and support breast feeding, the marketing of “follow-up formula” and “growing-up milks”—targeted for consumption by babies aged 6 months to 3 years—should be regulated in the same way as infant formula for babies aged 0-6 months.3

Neena Modi: The RCPCH and funding from infant formula companies