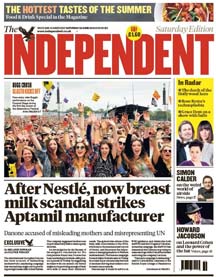 The Independent in the UK has a front-page story on Danone’s marketing of Aptamil formula in Turkey, exposing how it misleads mothers and has misrepresented its relationship with UN bodies. See:
http://www.independent.co.uk/news/uk/home-news/exclusive-after-nestl-now-breast-milk-scandal-strikes-aptamil-manufacturer-danone-8679226.html

Danone’s campaign encourages mothers to question whether they are producing enough breastmilk for their babies and includes a website where they can calculate volumes. Television advertising promoted its Aptamil formula with claims such as: “Your baby needs at least 500ml milk per day. If your breast milk is not enough, give Aptamil formula to support your baby’s immune system.”

Danone claimed its message was endorsed by WHO and UNICEF, but the Independent reports: “Both the WHO and Unicef have denied endorsing the campaign. The WHO said Danone did not have permission to use its logo and has written to the company asking it to remove its name within 14 days.”

For Baby Milk Action and its partners in the International Baby Food Action Network (IBFAN) this is just the tip of the iceberg as they document malpractice by Nestlé, Danone and other baby food companies around the world.

“It is very welcome to see such prominent coverage of this example of baby food companies breaking the rules. Nestlé and Danone are the largest and second largest baby food companies in the world and both systematically violate the marketing requirements. They are engaged in a marketing war, which has just reached the UK with Nestlé takeover of Pfizer Nutrition/Wyeth and the SMA brand of formula in December 2012.

“Nestlé is worse than Danone on a global scale and continues to be the target of a boycott. At present Nestlé is leading industry attempts in the Philippines to drastically weaken marketing regulations introduced in 2007.

“In the UK, demonstrations are being held outside events Nestlé is holding in hotels in an attempt to circumvent the restrictions many health facilities have in place to stop company representatives targeting staff. In these health facilities, companies can only provide information on their products to a designated expert staff member (or a multidisciplinary committee in some regions), who will assess the accuracy and only pass on what is necessary.”

Nestlé’s campaign against regulations in the Philippines – click here.

Campaign against Danone’s aggressive marketing in the UK – click here.