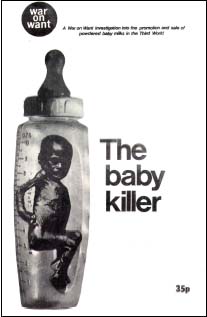 Key within this history is the publication The Baby Killer by Mike Muller, published by War on Want in 1974. Pictured left (download here).

The BBC World Service interviewed Mike Muller for a programme in its Witness series – listen here. The BBC History Hour did another programme the following week, commenting on the impact of the Boycott and other campaigns.  Neither programme brought the story up to date. (Please share the link to the page you are currently reading with your friends and colleagues as the BBC programmes do not explain the current situation).

Nestlé took legal action when The Baby Killer was translated into German by Swiss campaigners and given the title in German: “Nestlé kills babies”.

The programme explores what happened in the libel trial and how this led to the International Code being adopted in 1981.

WHO, UNICEF and IBFAN launched a report assessing the state of implementation of the Code and subsequent, relevant Resolutions of the World Health Assembly in 2016. Although over 70 countries have now introduced laws, action is still needed. Nestlé continues to put its own profits before the lives and well-being of babies in the way it markets its products. Something we continue to campaign on and raised at the Nestlé shareholder meeting again in April this year.

Click here for more on the Nestlé boycott and what Nestlé is currently doing.