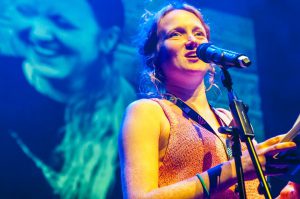 Hollie is one of Britain’s most exciting poets, winning the Ted Hughes prize for her collection, Nobody Told Me and currently touring her new book, Plum. Her poem Embarrassed, about her own experiences of breastfeeding in public, which also touched on issues such as the aggressive marketing of breastmilk substitutes and the unnecessary death and suffering this causes, has been viewed over seven million times online.

“I think Baby Milk Action is so under-rated and so so needed. I didn’t know about them when I had my baby and I wish I had. An organisation dedicated to making it as easy as possible for parents to feed their babies as safely as they can. Without their massive and ongoing efforts to keep a check on formula company misinformation, and to advocate for safer infant feeding policies, I think we’d be in a lot more trouble and having a much more difficult time raising our kids.”   Announcement press release. 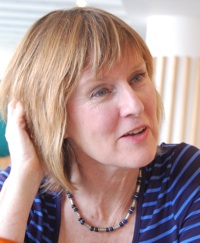 Gabrielle Palmer has worked to stop the unethical promotion of baby foods for nearly 50 years and was a founder of Baby Milk Action.  Her ground-breaking book, The Politics of Breastfeeding, is now in its revised third edition and has never been out of print.

She has been a teacher and campaigner all her life, first in schools and then as a Save the Children, Schools and Universities Organiser. Mike Muller’s booklet,  The Baby Killer, published by the charity War on Want in 1974, sparked her determination to do something  about the unethical promotion of baby foods, and she was a key force in helping get Baby Milk Action established. She moved to Mozambique in 1981 as a volunteer with the International Voluntary Service where she worked in orphanages and hospitals and ran classes for mothers of malnourished children and student health workers. She observed that mothers can sustain breastfeeding, despite poor food intake, if the breastfeeding culture is not undermined by false information, whether commercial or medical.On her return to the UK she studied for an MSc Human Nutrition at the London School of Hygiene and Tropical Medicine (1985).

From 1991-7 Gabrielle was co-director of the international short course, Breastfeeding: practice and policy at the Institute of Child Health, London. During these years she contributed to the development of the WHO/UNICEF transferable courses designed for the ‘cascade’ training of trainers, globally. These included, Breastfeeding Counselling: a training Course, field testing the Chinese version in Taiwan in 1997; the UNICEF training course on the International Code of Marketing of Breast-milk Substitutes and the WHO/UNICEF HIV and Infant Feeding course. In 1999 she was appointed HIV and Infant Feeding Officer in UNICEF HQ, New York. From 2001 to 2007 she worked as a part-time lecturer and tutor at the London School of Hygiene and Tropical Medicine as well as simultaneously serving on UNICEF UK Baby Friendly Initiative Designation Committee, and continuing various freelance consultancy work. She has worked and run short training courses for health professionals in 46 countries including Mongolia, Libya and North Korea.

“By taking away women’s primordial right to sustain their own children with their own milk, through the destruction of traditional knowledge and the reorganisation of work processes, dependency on a powerful dominant group is created.”    The Politics of Breastfeeding