A major health conference in Scotland  was cancelled last week following complaints about it being sponsored by Nestlé. 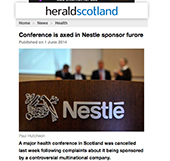 The Building A Healthier, Fairer Scotland conference  was planned to take place at Dynamic Earth in Edinburgh on Tuesday (27 May). Organiser P3 Media cancelled the conference in response to objections against Nestlé, from speakers and participants.

According to C&IT, criticism to Nestlé’s headline sponsorship arose after the conference agenda was circulated. Following objections from senior NHS figures and members of the Scottish Public Health Network, the event was cancelled.

In a letter to the event’s organiser, the Scottish Public Health Network, said: “In view of your decision, some would suggest error, in accepting sponsorship from a trans-national confectionery and breast milk substitute manufacturer, we will be recommending to colleagues that they should not attend or participate in your conference.”

Patti Rundall, Policy Director of Baby Milk Action says:   “From Baby Milk Action’s perspective, the sponsorship would have done a more harm than good. Nestlé would certainly have used it as part of its Corporate Social Responsibility  campaign as evidence that it cares about public health and can be trusted to regulate itself.  It uses such sponsorship to bypass the restrictions many health facilities have in place on company representatives meeting with staff.  Thankfully  health workers in Scotland are respecting the World Health Assembly Resolutions on avoiding conflicts of interest.  These Resolutions are important if health workers and parents are to get sound objective information.”

Resolution WHA58.32 2005 Urges Member States: “to ensure that financial support and other incentives for programmes and health professionals working in infant and young child health do not create conflicts of interest”.

Baby Milk Action has been raising concerns about conflicts of interest for many years and promoting a “Say No to Formula Company sponsorship” in the UK ever since Nestle bought the Wyeth SMA brand and introduced the sorts of aggressive practices we are used to in other countries. Nestlé has been hosting so-called education events for health workers, where it requires them to sign up via an SMA-branded website. 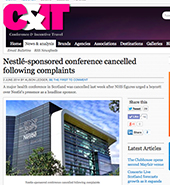 In C&IT reported Nestlé claimed that it would have used the event to  promote breastfeeding “As the world’s leading nutrition, health and wellness company we were pleased to be asked to help support this important conference. Our intention was to promote the importance of breastfeeding and good nutrition throughout pregnancy and in early life, and ways of supporting parents with their feeding choices. We were not there to talk about any of our products and were open and transparent about our involvement throughout.”

Such claims do not stand up to scrutiny.  Nestlé tells investors its strategy of promoting nutrition education is to increase sales of infant nutrition products from birth.  See Update 46 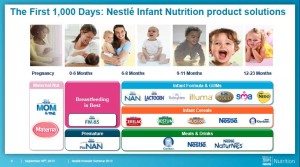 Nestlé boasts how its promotion campaign, codenamed ‘Project Happy’ is boosting sales of infant formula with its ‘Gentle Start’ claim (below – despite the above image saying ‘Breastfeeding is Best’). Click on images to view larger versions. For examples of claims on Nestlé labels from around the world, see our poster. 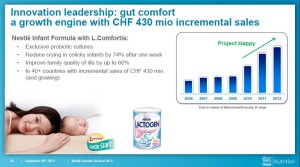 Nestlé currently labels its infant formula around the world with idealising claims such as it is the ‘natural start’ and ‘protects’ babies. Executives at the highest level of the company defend these practices. It also undermines women’s confidence in their bodies’ competence to breastfeed by promoting special ‘formulas’ for pregnant and nursing mothers. (see the Mom & Me formula above).

In February  EU Member States adopted an EU Action Plan on Childhood Obesity that called for no sponsorship by food and drink companies in Schools.