CLICK HERE  for WHO, UNICEF, WABA and ILO materials

Just like 2014, Nestlé has once again been hijacking World Breastfeeding Week, and all the while  continuing to systematically break the UN  marketing requirements.

There have been advertisements in daily newspapers, sometimes full page,   for Nestlé’s  “SuperBabies are here”  in Trinidad and Tobago with NesteCarribeanFacebook pages.    In India – where the Maggi Noodles controversy continues to rage – and the law forbids promotion of any products for babies under 2 years,  Nestlé is  boasting about its new Maternity Protection Policy, describing its  Start Healthy Stay Healthy  campaign as “a science-based educational initiative by Nestlé which, in partnership with doctors, focuses on the lifelong impact of breastfeeding and the first 1,000 days of life.”   CLICK HERE    Nestlé has had products seized for breaking labelling laws and the government has confirmed that its sponsorship of health workers is illegal.

There have also been full page supplements in  8 newspapers in Bangladesh, a country that also has a  strong law banning formula promotion.    Nestle Banglades

Its perhaps a waste time pulling these scams apart – but of course they all emphasise the  “benefits” of breastfeeding  –  rather than the  risks of not breastfeeding. Just see how on the  Nestle Caribbean Facebook  sugary  JUNK baby foods and snacks are promoted as having the same ‘benefits’  we’ve heard about on the superficial breastfeeding promotions  – all  this just a click away under the ‘Big nutrition for small Tummies’ strap line.  Not to mention the lousy advice about sore nipples that ignores positioning.

And do we really want mothers (and cutesy big eyed babies) boasting about breastfeeding – to friends who may not have been given the right support…..   I don’t know about anyone else  but these campaigns leave me with a sick feeling in my stomach and show exactly why the World Health Assembly was right to warn about conflicts of interest in all child health programmes.

An example is how Nestle (Wyeth) and others are  promoting formula in Hong Kong at the baby expo there this very same week: Hong Kong.  Its clearly a strategy to divert attention from.

CLICK HERE for  Mike Brady’s blog  that shows how Nestlé refuses to make changes, unless forced by legislation or campaigns. 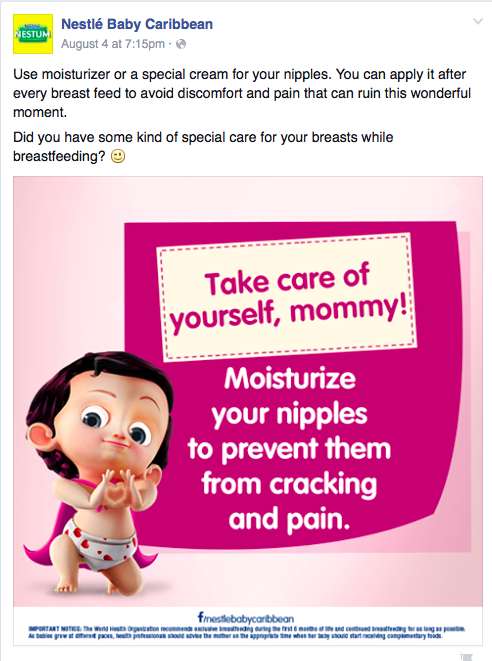 Nestle Caribbean Facebook page – pretends to promote Breastfeeding – but highlights problems – while forgetting to mention the importance of positioning . And all the superficial messages are one click away from adverts for sugary junk foods. 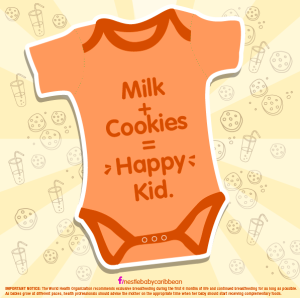 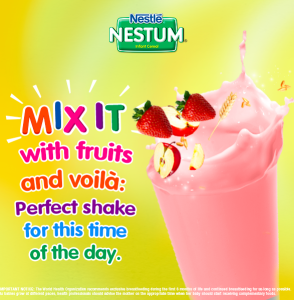