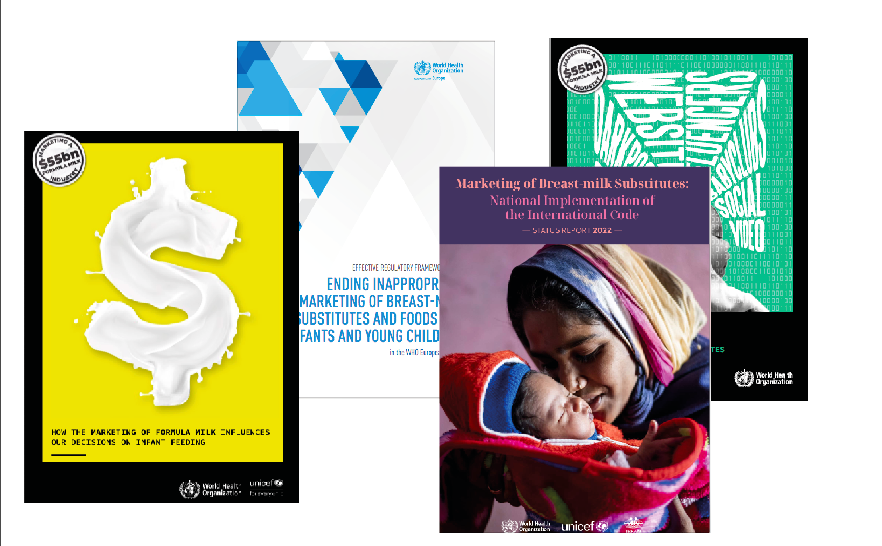 WHO report on scope and impact of Digital Marketing 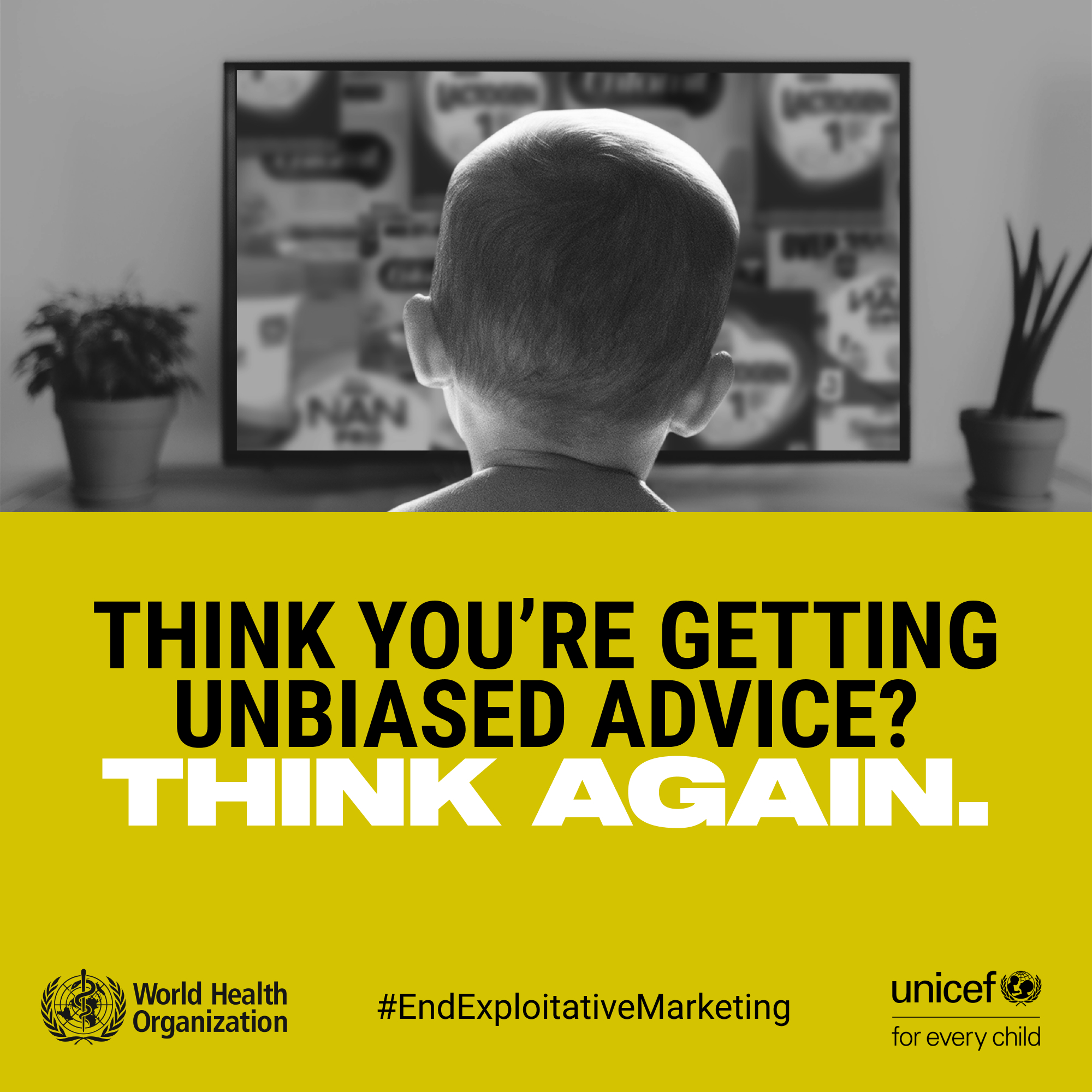 IBFAN welcomes the WHO UNICEF report – How marketing of formula milk influences our decisions on infant feeding,

The report clearly recommends that governments everywhere adopt, monitor and enforce laws to prevent the promotion of formula milk, in line with the International Code and subsequent WHA Resolutions,  prohibit promotional claims, adopt parental leave and other policies to support breastfeeding.  It also recommends that health workers are banned from accepting sponsorship from companies that market foods for infants and young children for scholarships, awards, grants, meetings, or events.
The Code does not need reform.  At the launch and in media reports some have suggested that the Code needs to be reformed.  We believe this to be a really bad idea that would be used by companies and industry-friendly governments to argue for more delay.  But there is no need.  The Code covers all forms of promotion – including e-commerce and cross promotion. Provided WHO provides its Member States with opportunities to adopt strengthening Resolutions and provided governments put these into law,  the Code can keep pace with marketing.  The Code is a global document and doesn’t address how governments legislate, prosecute and hold corporations to account. This is best done at national or regional level.

IBFAN has been monitoring company practices and alongside WHO and UNICEF has been helping governments bring in strong effective legislation on the Code for the last 40 years.  After many failed attempts  to persuade baby food companies to voluntarily stop predatory marketing, it’s clear that there is no point chasing these companies for watered down here-today, gone-tomorrow promises or considering them to be  ‘partners’ in health.   This new report should leave no-one in any doubt: strong legislation is the best and only way forward.  Policy setting processes, including global trading standards (2)(3), must be safeguarded from commercial influence through effective transparency and Conflict of Interest safeguards.

Click Here,  for the report and other useful materials.

Here is some of the media coverage:

In Large WHO Survey, a Picture of Reckless Formula Milk Marketing 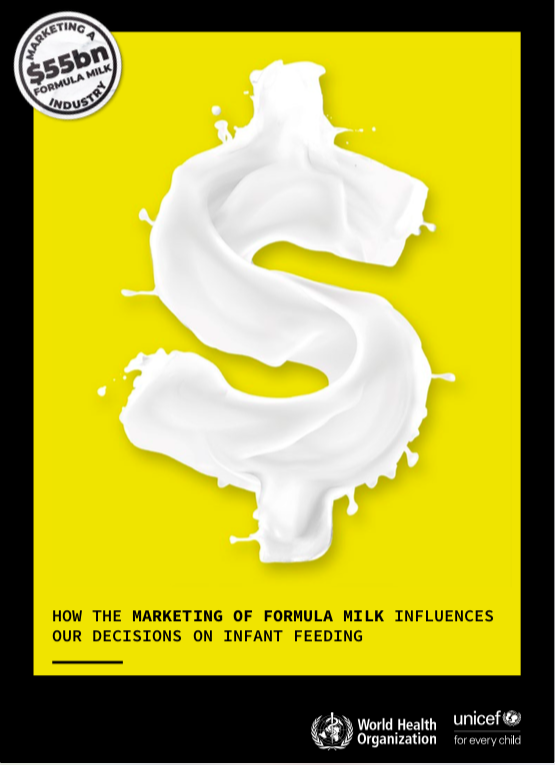 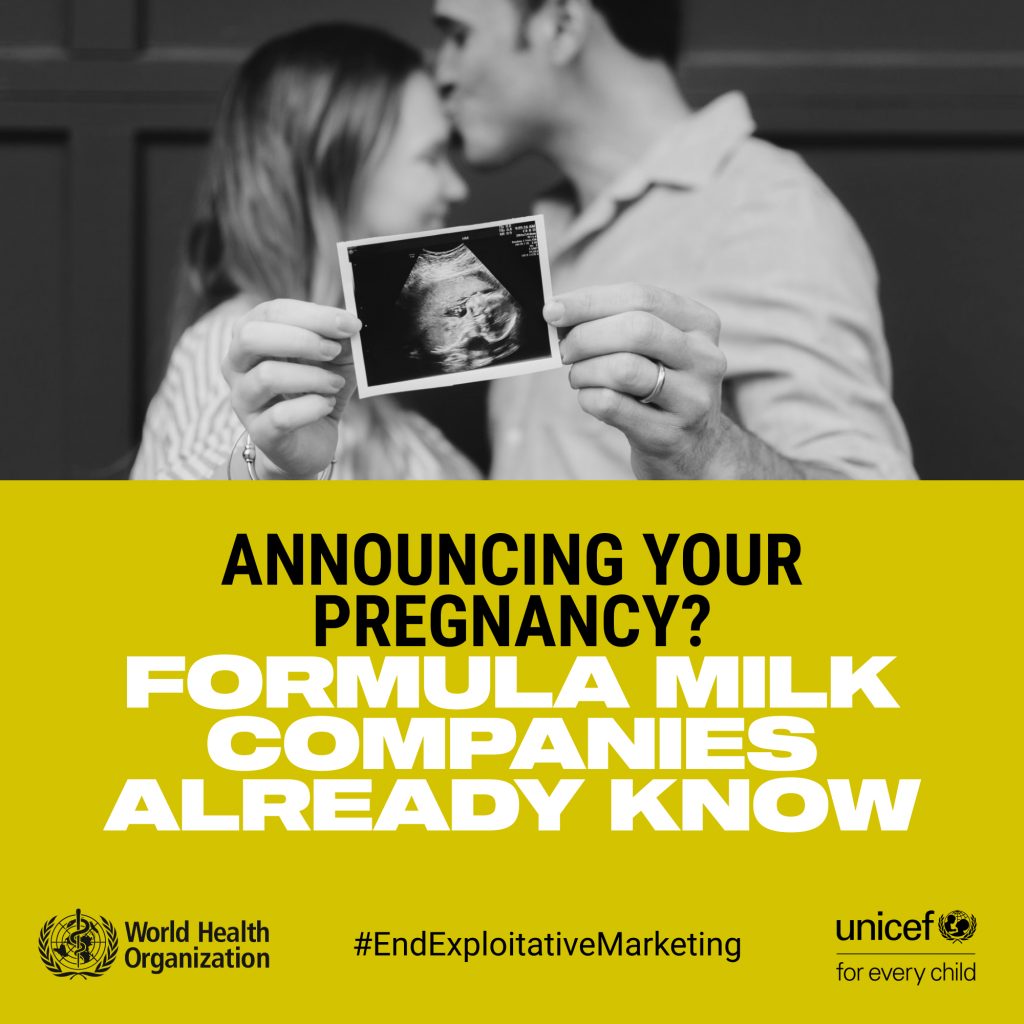 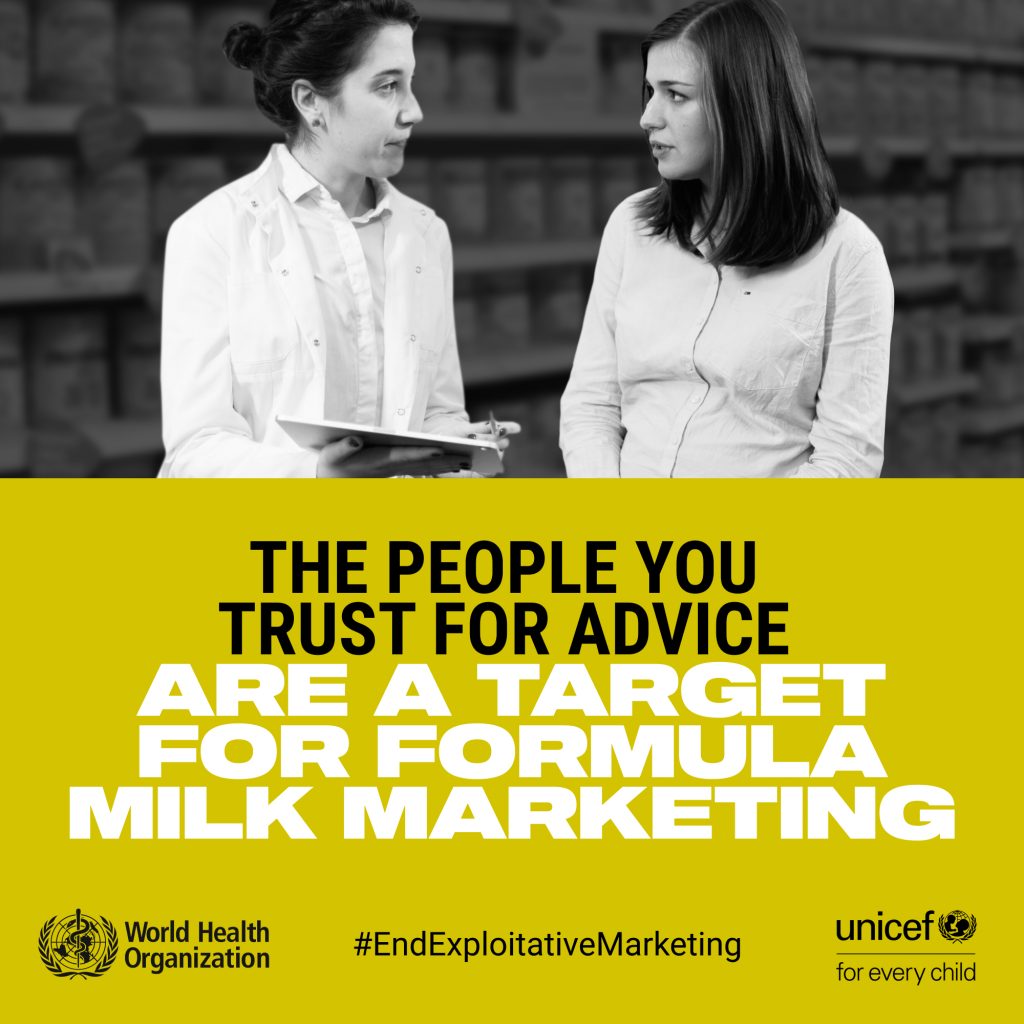 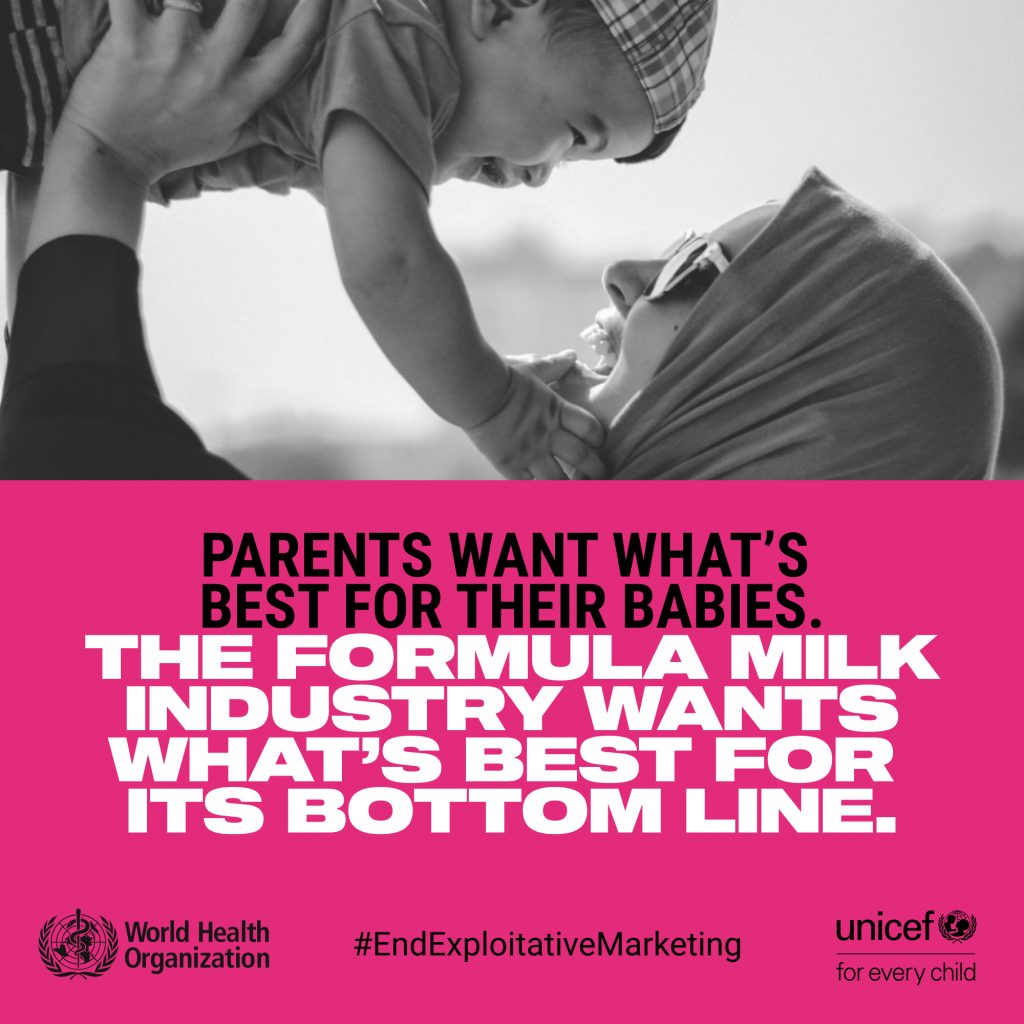 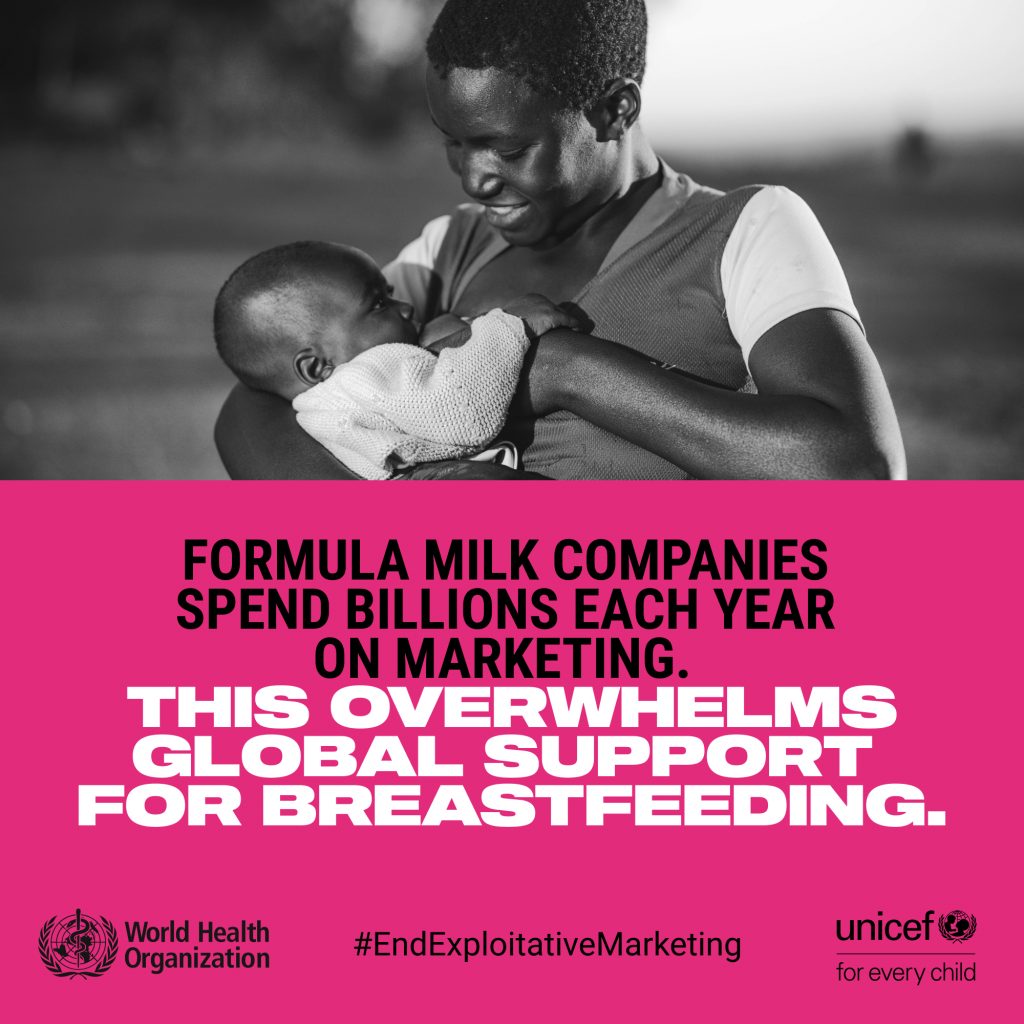 See the video recordings  of the launch of WHO’s research on unethical and aggressive formula industry marketing.   Dr Tedros Adhanom Ghebreyesus, Director-General of the World Health Organization, the United Nations Children’s Fund (UNICEF) and partners will launch a new report, How the marketing of formula milk influences our decisions on infant feeding.   Helen Clark – former Prime Minister of New Zealand – will be part of the panel for the morning event and Dr Hugo López-Gatell Ramírez, Vice Minister of Prevention and Health Promotion, Government of Mexico will be part of the panel for the second event.

Below some of the images from Constance Ching’s article.   For more evidence of the widespread marketing tactics of the major baby food companies visit our global monitoring page: 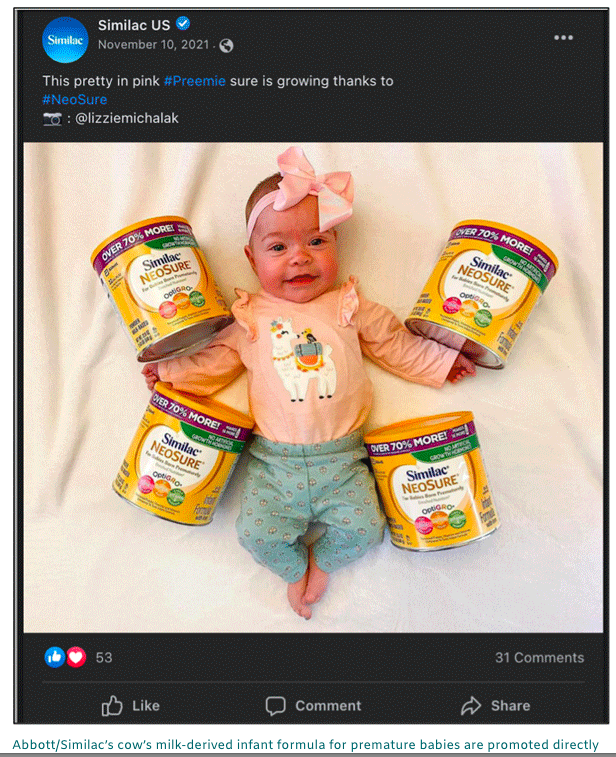 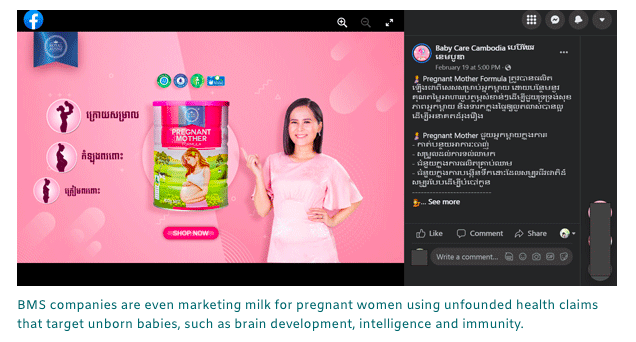 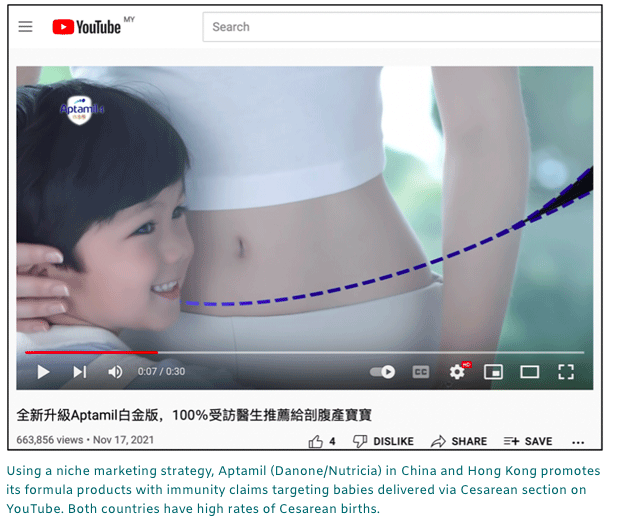 This contains a weak recommendation:

Promote and support exclusive breastfeeding for the first 6 months of life, including promotion of breastfeeding)

There are being revised  but are still not strong enough: first draft of the Discussion paper :