CLICK HERE for an Italian article in Il Manifesto, Tanto zucchero please, siamo italiani  about the controversy surrounding WHO’s Sugar Guidelines and the Conflicts of Interest on the Italian Delegation.

CLICK HERE   for a new BMJ article about  the issues around the Scaling Up Nutrition (SUN)  just posted piece on the BMJ website interesting:

IBFAN and other  NGO Statements during the WHO  discussions in Geneva are now posted directly on to WHO’s website.  CLICK HERE 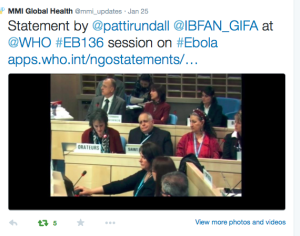 Click here for our  Press Release  (see picture) on the IBFAN/PSI/HiP intervention on Ebola and the  risk of commercial exploitation. OXFAM, MSF, Save the Children and others also made interventions  during the Special Session on Ebola  on Sunday, 25th January.

Tuesday – 27th January –   during the debate on WHO’s Framework for Engagement with Non State Actors took  place –  the majority of Member States, including South Africa (for the whole Africa region) , India, Nepal, Brazil, Argentina, Thailand and many  other developing countries, calling for  strengthening of this very flawed draft set of policies,  especially in relation  to safeguards on Conflicts of Interest.  In contrast the  industrialised rich nations,  USA, Canada, UK, Germany, France, Australia and others, would have been  happy to adopt the  document straight  away and review it after a couple of years.  Lida Lhotska’s intervention for IBFAN stressed the need for an expert consultation on conflicts of interest because of the persistent misconception of COI theory that permeates through the entire set of policies.(also pasted below)   A decision proposed by Argentina and discussed at by a  draft group was adopted  has been adopted requesting the Director General to:

(1) compile these proposals and to make them available to Member States by 9 March 2015;

(2) convene an open-ended intergovernmental meeting from 30 March to 1 April 2015 with a view to discussing the textual proposals submitted by Member States;

(3) submit, based on the outcome of the above intergovernmental meeting, a revised version of the Framework of Engagement with non-State actors to the Sixty-eighth World Health Assembly through the Programme, Budget and Administration Committee.

The discussions on NCDs started on Saturday 31st – with the much controversy about WHO’s Sugar Guidelines. The opposition by Italy, the USA and others highlighted everything we had been saying about the need to protect WHO’s norm setting function from commercial influence.

My intervention for IBFAN on  the Update on the Commission for Ending Childhood Obesity is HERE and pasted below.

Paragraph 9 explains that they decided to exclude ILSI over lack of transparency over its links to tobacco. This illustrates the importance of the whistleblower/watchdog role.

Climate Change and indicators for the WHO Targets on Maternal and Infant and Young Child Nutrition will come up on Monday 2nd February.