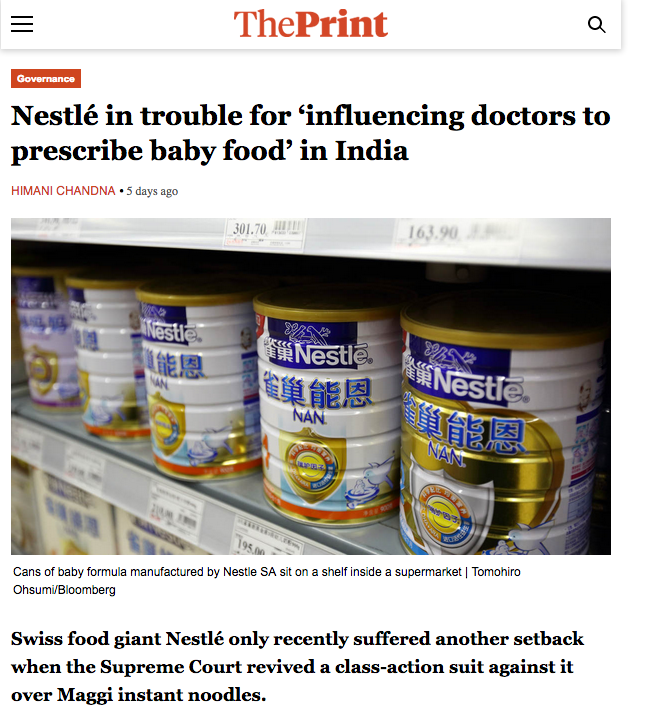 New Delhi: Swiss food giant Nestlé is under the lens for allegedly influencing doctors to recommend its baby products, including infant milk
powder, to parents.  Following a complaint by NGO Breastfeeding Promotion Network of India (BPNI), the Ministry of Health & Family Welfare is looking into the claims and has also forwarded the matter to the Union Ministry of Women & Child Development (WCD), which is responsible for promoting breastfeeding in India.

The complaint is about an event organised by Switzerland-based Nestlé Nutrition Institute, a research body affiliated with Nestlé, in October last year, which BPNI claimed was an industry-supported meeting intended to influence doctors into prescribing their baby food.

“We have forwarded the complaint to relevant authorities and have been checking the complaint internally too,” Preeti Sudan, secretary, Ministry of
Health & Family Welfare, told ThePrint. “Once we get the confirmation on the alleged violation, we will take strict action.”

In a letter dated 12 December, accessed by ThePrint, the Health Ministry asked Dr Rajesh Kumar, the joint secretary for Women & Child Development
Ministry, to take “necessary actions” in the matter.

The allegations of Nestlé influencing doctors in violation of law have come to light days after the Supreme Court revived the central government’s class-action suit against the company over the alleged breach of food-safety standards in the manufacture of its wildly-popular Maggi instant noodles.

The Nestlé Nutrition Institute has denied the allegations, claiming that the programme was just meant for knowledge exchange.

In its letter to the Ministry of Health & Family Welfare, the BPNI expressed doubts about a “scientific programme” organised by Nestlé Nutrition
Institute for doctors on 24 October 2018 in Maharashtra’s Dhule. ThePrint has a copy of the letter, which was sent to the government in
November.

“We request you to initiate appropriate action against Nestlé Nutrition and others who have violated the IMS Act,” BPNI says in the letter, signed by Dr
J.P. Dadhich, the NGO’s technical director.

A similar event organised by Nestlé in Delhi was reportedly cancelled when two paediatricians invited as speakers declined to participate after the
BPNI flagged the event to the Delhi unit of the Indian Academy of Paediatrics.

The latest controversy needs to be seen in light of global efforts to promote breastfeeding as the healthiest way to rear infants, and demands for
restrictions on misleading advertisements about substitutes like formula. The growing consensus around the necessity of breastfeeding, The New York
Times noted in a report last year, has seen baby-food sales “flatten in wealthy countries in recent years”.

According to the same report, “A 2016 study in The Lancet found that universal breastfeeding would prevent 800,000 child deaths a year across the globe and yield $300 billion in savings from reduced health care costs and improved economic outcomes for those reared on breast milk.”

Also read: Nestle wants your DNA to personalise your nutrition

Denying the allegations, the Nestlé Nutrition Institute said the event was not organised to promote instant formulae.

“The participation to these sessions is voluntary. The objective of the session mentioned by you was also for the purpose of sharing science/nutrition-based topics and not to promote infant formulae,” the spokesperson added.