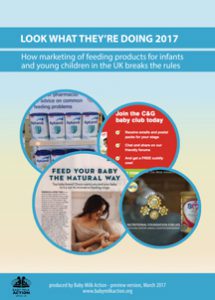 UPDATE: The Bill was not debated due to an over-packed Parliamentary agenda and lack of time. Alison Thewliss MP has instead announced an inquiry into Infant Feeding Services. This has now been suspended until after the General Election on 8 June.  Click here for details on what to ask candidates during the election campaign if you are a UK voter.

Members of Parliament are scheduled to debate the Feeding Products for Babies and Children (Advertising and Promotion) Bill on Friday, 24 March. Although infant formula and follow-on formula marketing has been regulated since 1995, formula, feeding bottle and teat manufacturers and retailers exploit weaknesses in the law and the lack of enforcement. A new monitoring report from Baby Milk Action provides examples of current marketing practices.

Company profiles are being added to the monitoring report webpage. Those already available show how companies repeatedly relaunch products with claims of health benefits. Danone ran over 21,000 television adverts in two relaunches of its Aptamil brand in 2016. Other practices include selling exactly the same formula under a premium and standard brand to maximise profits. Unnecessary milks for older babies (follow-on formula and so-called “growing-up” milks) are promoted with claims for health benefits, some of which have been debunked at the Advertising Standards Authority. Marketing of feeding bottles and teats is outside the scope of the current law and companies aggressively target breastfeeding mothers to encourage them to introduce bottles.

The Bill, which passed its first reading on 16 November 2016, is proposed by Alison Thewliss MP, Chair of the All Party Parliamentary Group on Infant Feeding and Inequalities. It aims to ensure that parents receive accurate, independent information on products and that these are checked for safety.

Baby Milk Action’s Look What They’re Doing in the UK 2017 monitoring report introduction sets out where current law falls short of the minimum marketing standards that successive UK governments have supported at the World Health Assembly: the International Code of Marketing of Breastmilk Substitutes and subsequent, relevant Resolutions (the Code).

Company profiles are being released successively, with campaigns calling on manufacturers to change practices and enforcement officers to take action where this is possible. The profiles highlight practices that break the Code, but are not covered by the current law. When the World Health Assembly adopted the Code in 1981 it said companies should abide by its provisions independently of government measures.

“We are grateful to the many members of the public and the health workers who report marketing practices to us. The formula, feeding bottle and teat companies spend millions promoting their products and drown out independent advice from NHS Choices and other independent sources. Whether mothers are breastfeeding or bottle feeding, they have a right to accurate information. We are calling on Trading Standards to clamp down on practices we believe are already illegal. Other practices are prohibited by international minimum standards that companies should also follow, but given the widespread breaches, clearly better regulations and enforcement are needed.”

The report introduction and company profiles reveal that:

Danone prices Aptamil Comfort infant formula at typically £1.50 more than its Cow & Gate Comfort brand, even though the powder in the packaging is exactly the same.

Promotional claims made by Danone, Nestlé and other companies for supposed benefits of follow-on formula and milks for older babies contradict NHS Choices, which says these milks are unnecessary. The ASA has ruled against claims that imply babies need these products for important nutrients.

Advertising for NUK First Choice teats claims they are “clinically proven for an optimal combination of breast and bottle feeding”, but the study referenced did not compare different types of teats and found babies suck differently on the breast and the NUK teat. No warnings are given of the impact of introducing feeding bottles if breastfeeding.

Retailers including Morrisons and Mothercare have repeatedly run in-store promotions that break the law, but have escaped prosecution by claiming these are localised mistakes. The report documents how promises to stop a recurrence have not been met.

Kendal Nutricare, based in the Lake District, promised on Monday 20 March that it would change its Kendamil formula labels and stop using unproven claims that babies gain more energy, sleep better and have better digestion with its formula.

Profiles on other companies are being added to the report webpage: http://www.babymilkaction.org/monitoringuk17