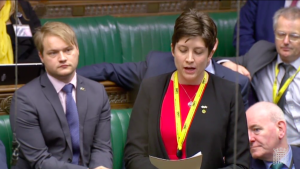 Alison Thewliss SNP MP for Glasgow Central made a great speech in the House of Commons today (16 November 2016) calling for stricter regulations to control the marketing of formulas for babies.

This was the first reading of her proposed bill. It won the approval of MPs and proceeds to a second reading on 24 February 2017.

Watch here on the Parliament TV website. The transcript of Alison’s presentation of the proposed bill is given below. After that you will find the Press Association news release. And after than an explanation about the different readings of a bill and the process for it to become law.

Feeding Products for Babies and Children, Advertising and Promotion Bill

Mr Speaker, I beg to move that leave be given to bring a Bill to control the advertising and promotion of feeding products for babies and children; to establish arrangements to set standards, and to measure claims, for the efficacy of products against those standards; to make provision about penalties for advertisers and promoters who do not meet the standards; and for connected purposes.

Mr Speaker, we all expect that the food we consume is safe. We would like to hope that the standard of that food is monitored, the advertising which tries to encourage us to buy it is accurate and – should this not be the case – that the companies involved would be punished for misleading us. We expect our health professionals to be knowledgeable, and for them to be able to give impartial advice on foods from a position of expertise. And we expect parents to have access to information so that they can make informed choices about how they feed the most vulnerable and precious people in our society, babies and young children.

Unfortunately, Mr Speaker, this is not the case. The present means of regulating products intended for babies and children, the Infant Formula and Follow-on Formula Regulations, has loopholes and is not enforced in any meaningful way. This is the reason I have brought this 10 minute rule bill to the House, and why I seek the support of Honourable and Rt. Honourable members today.

Mr Speaker, the Bill I wish to bring in would tighten controls on advertising and promotion of infant and young child formula. Under the present regulations, advertising of formula intended for babies under six months is not permitted, so formula manufacturers have focussed their efforts on promoting follow-on milks. Looking at these products on a supermarket shelf, it is clear that they are branded in a similar way, so that parents get the impression that a child will progress from one to the next. They are numbered from one through to three or four. The branding is very distinct and attractive; golden, with shields, crowns and cute animals. This is a growing market, and competition is fierce. Dr Nigel Rollins from the Department of Maternal, Newborn, Child & Adolescent Health at the World Health Organisation recently predicted that the formula industry market value by 2019 would reach 70.6 billion US dollars.

The majority of growth is coming from follow-on and toddler milks – but the truth is that these particular products are not necessary. They have emerged due to the tightening of regulations around formula intended for babies aged zero to six months. They are being marketed on tv, print and online as being important for child development, but many agencies globally are concerned about the high sugar content of these products and young children would actually receive all of the nutrients they need from a healthy balanced diet.

I am concerned that parents are not hearing that message and that there is an impact on family budgets as a result. Infant formula milks are not cheap; the size of the containers is getting smaller while the cost is increasing. As a rough guide, the price of a tin of infant formula can range from £8.50 to £14. Ready prepared milks are even more expensive – using one of the brand leaders in the first week of life could cost a family over £100. Certain heavily advertised niche brands can cost nearly £23 for 900g. For a baby in the first six months, these tins of formula might last around a week. As you can start to imagine Mr Speaker, this cost can have a significant impact on household budgets.

If families don’t have access to impartial information about the content and merits of infant and young child formula, they will be making the decision on which to choose by the way formula is presented on the shelves, and by the marketing produced by the companies. They might well consider the most expensive to be the best. I don’t believe that the formula companies are providing good and transparent enough information to allow parents to make an informed decision. This is being left to small charities like First Steps Nutrition Trust, who have guides to infant formula on their website, but we don’t have any independent analysis to check whether the information provided by the companies about their products is accurate.

The MINTEL Baby food and drink report from April 2016 notes that one of the main factors determining parental choice of milk is ‘brand’. What is not well enough known is that all formula milks have to be of a very similar composition to comply with the requirements set by the EU and claims are made primarily for unnecessary ingredients. Most of the rest of the difference is simply from the label and the branding, which parents are paying for – companies spent about £23 for every baby born in the UK on marketing follow-on formula in 2015. Given the disproportionate prevalence of bottle feeding in less affluent areas, it’s the poorest families in our society who are losing out the most. This Government should act to protect their interests.

This is, Mr Speaker, where one might expect health professionals to be able to help. Unfortunately, their ability to do so is being undermined by formula companies, and by the lack of support and leadership from government in protecting them via legislation.

There is a significant loophole in the regulations, which means that all infant formulas, from birth, can be advertised “in a scientific publication, or for the purposes of trade prior to the retail stage, in a publication of which the intended readership is other than the general public”. This includes adverts in medical and health professional journals.

Dr Helen Crawley of First Steps Nutrition Trust recently published a report called “Scientific and Factual?” A review of breastmilk substitute advertising to health professionals”, which analysed some of the claims made in advertising to healthcare professionals. Many of the headline health claims being made can’t be substantiated, the sources they cite are not in line with health policy, graphs set out to mislead, and these adverts may also fail to meet the Government’s own requirement for claims to be supported by peer – reviewed work.

These adverts can’t be challenged as they could in any other publication by taking the matter to the Advertising Standards Agency, which just can’t be fair. The intent of these adverts is to influence health professionals, who are the first line of support to families. This bill would aim to tighten up this loophole and protect the integrity of health professionals from misleading claims.

Mr Speaker, this Bill also proposes arrangements for controlling claims. Claims and adverts are challenged successfully by organisations such as Baby Milk Action. At present, claims can made for ingredients which are not necessary. For example, there is a global trend at the moment towards adding probiotics to formula and for many years here companies have made claims about prebiotics in formula, which scientific authorities say have no benefit in formula. There may also be issues with degrading of formula composition over time that we just don’t have any information about. There is no independent verification of formula composition or of claims; furthermore the Government takes no formal national role in testing and monitoring of all infant formulas to ensure that the products are safe and meet compositional regulations. I think parents would be quite shocked to find out this was the case, and I propose that the Government gives serious consideration to making improvements in this area.

Lastly, Mr Speaker, I wish to turn to the matter of penalties. There have been no prosecutions under the current regulations since 2003, despite numerous flagrant breaches. Under the present regulations, contravention or failure to comply is an offence liable on summary conviction to a fine not exceeding level 5 on the standard scale. Mr Speaker that is a fine of up to £5000. Given the size and scale of this industry, that level of fine would barely register at all. Contrast this with Romania, which has recently signalled its intent to bring in a new law banning the promotion of infant formula products for children up to the age of two. Breaching these rules would constitute a criminal offence, with fines up to 100,000 Romanian New Leu, the equivalent of around £19,000. This is a step in the right direction and would put down a marker to formula companies that failure to comply is not going to be a mere slap on the wrists.

Mr Deputy Speaker, the World Health Assembly resolution adopted in May 2016 clarified that all infant milks marketed as a breastmilk substitute in the first three years of life should be covered by the WHO Code – the International Code of Marketing of Breastmilk Substitutes – including follow on formula, toddler milks and other milks. We have the opportunity today to make progress on this recommendation.

Mr Speaker, I am grateful to the support of the colleagues across the House who have put their names to this Bill. I would be glad to consider other aspects of this issue should the House give me leave to bring in this Bill.

The question is does the Honourable Member have leave to bring in the bill. Will all those of that opinion say “Aye”.

A date for your diaries.

What are the steps to this new law becoming reality?

This is a summary of what you will find on the Parliament website.

The first reading of the bill just requires the title to be read out in Parliament, followed by the MPs present agreeing to order it is printed. Alison Thewliss did this under the “10-minute rule”. This allows any MP to put forward a proposal for a bill. Very few bills become laws in this way as they need support from the Government to have time in Parliament. However, text from them may be taken up in other legislation. The Government has already said it will be debating formula marketing rules after its “Great Repeal Bill” breaks the link with EU Regulations.

The text of the bill will now be drafted, with the help of Parliament’s legal experts. This will then debated at the second reading, where there may be a vote.

If Parliament agrees, the bill then progresses to Committee Stage. Here it is scrutinised clause by clause and the committee may call outside experts and make amendments.

The Bill is then presented to the whole Parliament and further amendments can be made. This process is then usually followed immediately by the third reading. If it is approved then it goes to the House of Lords.

A similar process is repeated in the House of Lords.

Any amendments by the Lords have to be accepted by the Commons and vice versa, so the Bill can pass back and forth. If there is no final agreement the bill falls. Once there is agreement (or the Commons asserts it authority for certain types of Bill), it goes to the Queen for signing.