(The photographs may be used free of charge, credited to Baby Milk Action – click on them for large versions)

The University of Alberta is receiving messages of protest from around the world as it plans to award Mr. Peter Brabeck-Latmathé, the Chair and former Chief Executive Officer of Nestlé, an honorary degree for contributing to “the preservation, distribution and management of one of humanity’s most vital resources: water.” The protests are because the company, which is the holder of a “Least Ethical Company” award (left), is criticised for practices including destruction of water resources, marketing baby foods inappropriately, trade union busting and other issues (click here). Campaigners warn that the University of Alberta will make itself a laughing stock if it goes ahead with presenting the honorary degree to Mr. Brabeck on 1 March.

Baby Milk Action’s partners in the International Baby Food Action Network (IBFAN), Infact Canada, stated: “INFACT Canada joins the Council of Canadians in condemning University of Alberta’s plans to award Mr. Peter Brabeck-Latmathlé an honorary degree. Instead, the University should criticize Nestlé’s destructive business practices and inform the company that there is no honour for the CEO!” – click here.

Click here for the page for emailing the University of Alberta, organised by the Council of Canadians.

Click here to register to attend the degree presentation at the University of Alberta – the event will also be live streamed.

Baby Milk Action has first-hand knowledge of Nestlé’s shameful behaviour regarding its Pure Life brand of bottled water and the harm caused to the historic water park in the spa town of São Lourenço in Brazil (click here). One of the Brazilian campaigners appeared as a witness in January 2012 in a court case brought against Nestlé in Switzerland for spying on campaigners – click here.

A new film, Bottled Life, examines one aspect of Nestlé’s exploitation of water: its Pure Life brand. The trailer is below:

Baby Milk Action is in ongoing commucation with Mr. Brabeck regarding violations of international baby milk marketing standards, which he refuses to stop. Accordingly, Baby Milk Action is asking supporters to email the University of Alberta to call on it to withdraw the honorary degree and instead suggest to Mr. Brabeck that he respond to campaigners’ concerns. Nestlé’s Global Public Affairs Manager admits that Nestlé is “widely boycotted”. An independent survey has found it to be one of the four most boycotted companies on the planet – click here.

Mr. Brabeck has a cabinet full of shaming awards for the way he runs Nestlé, putting profits before human rights and the environment. In my view, Mr. Brabeck deserves to be in court, not receiving an honorary degree. Indeed, Nestlé is in court in India for failing to label baby milk correctly and sanctions include the possibility of imprisonment for the Managing Director – not surprisingly Nestlé has been fighting the case for nearly two decades. More recently, as part of the Nestlé Critics coalition, we have reported Nestlé to the UN Global Compact for egregious violations of the Global Compact Principles, including for its impact on water. Did the University of Alberta carry out any form of due diligence when selecting Mr. Brabeck for an honorary degree?

The University of Alberta has already been prompted by the email campaign to put a defence of its selection of Mr. Brabeck on its website (click here). This makes no mention of the civil public action brought against Nestlé in Brazil that led to it ending production of Pure Life bottled water in the country, the criticism of its activities in countries such as Pakistan nor the many community battles across North America and elsewhere.

The University states: “The Honorary Degrees Committee also gave significant weight to the fact that, under Brabeck-Letmathe’s leadership, Nestlé was awarded the Stockholm Industry Water Award by the highly regarded Stockholm International Water Institute in August 2011.”

But was Nestlé even eligible for the Stockholm Industry Award? The rules state (click here): “The Award cannot be given to political, religious or lobbying organisations.”

According to the Center for Responsive Politics in the US, Nestlé is spending about US$ 4 million per year on lobbying, with US$ 200,000 specifically by Nestlé Waters North America (and US$ 120,000 by Nestlé Infant Nutrition).

(The graph below loads from the Center for Responsive Politics site. Please let us know if it is no longer appearing).

This graph is used under the Creative Commons Attribution-Noncommercial-Share Alike 3.0 United States License.

Nestlé has responded to an article in the Edmonton Journal – click here.

Nestlé refers to the FTSE4Good Index. It is not a requirement that companies comply with the baby food marketing requirements to be included in this Index. For details – click here. 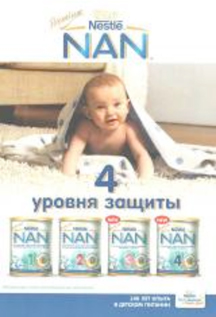 2. Nestlé has rolled out labels in 120 countries claiming its formula “protects” babies, although babies fed on formula are more likely to become ill than breastfed babies and, in conditions of poverty, more likely to die (left, a promotional leaflet distributed to health facilities in Armenia by Nestlé in 2011). It also refuses to bring instructions into line with World Health Organisation guidelines to reduce the risks to babies fed on formula. According to UNICEF: “Improved breastfeeding practices and reduction of artificial feeding could save an estimated 1.5 million children a year.”

Mr. Brabeck has been closely involved in the UN Global Compact CEO Water Mandate, which received the Greenwash Award 2010 prior to the World Economic Forum – click here.

Black Planet Award 2007: Awarded by Ethecon for the irresponsible marketing of baby food contaminated by genetically manipulated nutrition, their tolerance of child labour and monopolisation of water resources – click here.

Public Eye Award 2005: Overwhelming winner of the “People’s Choice” award for “for its practice of marketing baby food and formula in the developing world by encouraging women to use their products instead of nursing their children.”

As Nestlé did not attend the award ceremony, this was presented at Nestlé (UK) HQ by Mike Brady of Baby Milk Action with Swiss TV in attendance.  (Photo: Copyright Baby Milk Action, 2003).

This list is incomplete. Please add details of other shaming awards to the comments.