The British Methodist Conference (4-11 July) will receive a report from the Church’s Joint Advisory Committee on the Ethics in Investment (JACEI), which has been released to the media. This includes a paragraph on Nestlé, in which the Church holds a million pound investment (full text below – see page 179 of the report). Baby Milk Action, which promotes a boycott of Nestlé over its aggressive marketing of baby milk in violation of international minimum marketing standards, is highighting that the report ignores serious concerns raised about Nestlé’s marketing during the period it covers. The JACEI report includes no update on criticisms of Nestlé in the areas of the marketing of breastmilk substitutes, labour and human rights abuses or the environment. There are no references to the recent reports produced by Save the Children, UNICEF Lao and others that document violations of the international baby milk marketing standards. 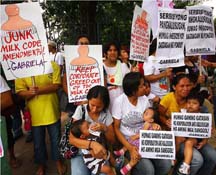 Mothers’ campaign in the Philippines ignored

There is no mention in the JACEI report of the protests in the Philippines during 2012 and 2013 against the “Nestlé monster bill”, which will remove prohibitions on aggressive marketing by formula companies if it is passed. Nestlé is leading the campaign for the weaker law to be adopted.

The JACEI report praises Nestlé for being the first company to meet the breastmilk substitutes criteria to be included in the FTSE4Good ethical investment Index, yet there is a significant conflict of interest involved as the Church Central Finance Board (CFB), which decided to invest in Nestlé in 2007, sits on the FTSE4Good committee responsible for assessing Nestlé’s baby milk marketing and advising on the criteria. The criteria were weakened in September 2010, paving the way for Nestlé’s inclusion in March 2011. All other ethical investment funds that look to independent evidence on baby milk marketing (rather than company reports) exclude Nestlé.

“As an investor, the Methodist Church profits directly from Nestlé’s aggressive marketing of breastmilk substitutes, which contributes to the unnecessary death and suffering of babies around the world. It seems to have been forgotten by many that so-called ‘engagement’ was presented by JACEI as a ‘complementary strategy’ to the Nestlé boycott. Conference never approved investing in Nestlé, but said if the Central Finance Board went ahead there should be monitoring of Nestlé ethical performance and reports to Conference. Is this being achieved with such a minimal report that includes none of the well-documented criticisms? Baby Milk Action was not contacted for information for the JACEI report, but the CFB would be aware of the evidence of malpractice we provide to the FTSE4Good committee of which it is a member; our calls for Nestlé be excluded from this ethical investment index have so far been rejected.“

Key developments that are not included in the JACEI report include:

• Baby Milk Action’s campaign of solidarity with partners in the Philippines, where Nestlé is leading the industry attempt to replace strong regulations successfully defended in 2007 with its own weak law. Members of Congress have been warned that US$ 400 million of investment will be cancelled by industry if the law is not passed.

• Save the Children’s 2013 report: Superfood for Babies: How overcoming barriers to breastfeeding will save children’s lives. This details examples of aggressive marketing by Nestlé in countries including China, India and Pakistan. An update on 3 May 2013 states: “When we asked Nestlé about their plans to respond to our research and report, they reiterated their existing policies.”

• Save the Children’s calls for FTSE4Good to change its criteria. In the above report, Save the Children calls for the FTSE4Good breastmilk substitutes criteria to apply to all countries, to be brought into line with international minimum marketing standards and for companies to be assessed against these, not just their own policies.

• UNICEF Lao 2012 report on marketing practices. This failure of JACEI to reference this report is particularly striking as JACEI does refer specifically to FTSE4Good assessments conducted in Lao. Violations noted by UNICEF Lao include promotion in health facilities and targeting of health workers, where it states: “Two companies (Nestlé and Dumex [a Danone company]) were the most noticeable companies”.

• UNICEF Lao criticism of FTSE4Good. UNICEF Lao released a report explaining why it refused to participate in the FTSE4Good assessments in country, which begins:

These are just some of the concerns relating to baby milk marketing. Other campaigns accuse Nestlé of labour and human rights abuses and environmental damage. There is a long-running campaign highlighting Nestlé’s exploitation of community water supplies. There is no reference to these issues at all in the JACEI update on Nestlé.

The information included in the JACEI report

The text on Nestlé in the JACEI report to the 2013 Conference is given below in its entirety in the interests of accuracy and fairness. This refers to the FTSE4Good ethical investment index.

A member of the CFB team sits on the FTSE4Good Expert Committee on Breast Milk Substitutes which met twice during the year.

The Expert Committee reviews adherence by companies to the WHO Code on Breast Milk Substitutes and FTSE criteria, conducts a verification process and makes recommendations to the FTSE Policy Committee. Ultimately it can recommend inclusion or expulsion from the Index. Nestlé are the first company with involvement in the marketing of Infant Formula to be included in the FTSE4Good Index. FTSE4Good undertook a verification exercise of Nestlé’s performance on Breast Milk Substitute marketing in Laos and Morocco over the past year. Our engagement with Nestlé on this subject continues including participation in a stakeholders’ meeting convened by the company in October 2012 to help inform and develop their approach to a range of ethical issues.

Baby Milk Action has protested to FTSE that including representatives of organisations with significant shareholdings in a company the Committee is responsible for assessing is a significant conflict of interests (CFB announced in its 2007 report it had purchased 6,000 Nestlé shares, valuing them at over £1 million). FTSE has rejected this criticism.

“Engagement” was presented as a “complementary strategy” to the Nestlé boycott

Although the Methodist Conference has never approved the Church investing in Nestlé, a previous JACEI report was the subject of controversy at the 2006 Conference. The texts adopted at that time stated a decision on investing was the responsibility of the Church Central Finance Board (CFB) and:

“JACEI acknowledges the continuing concern with regard to some aspects of Nestlé’s interpretation of the International Code, the implementation of company guidelines and the transparency of the procedures for monitoring compliance. These concerns may cause some through conscience to maintain a consumer boycott of Nestlé products.”

“The Joint Advisory Committee for Ethics in Investment (JACEI) has discussed with Nestlé ethical concerns across a range of issues…. there is scope to influence change through engagement….”

“Many would consider that these two strategies [the boycott and engagement] have complementary objectives.”

Instead Conference agreed that a monitoring system should be established to evaluate Nestlé’s ethical performance and a report made to Conference on the outcome of meetings “in the event of the CFB deciding to invest in Nestlé.” Baby Milk Action does not consider the JACEI report constitutes a satisfactory monitoring system.

The complementary strategy of maintaining a consumer boycott of Nestlé products is now rarely referred to by the Methodist Church, in part because JACEI and CFB give the impression that Nestlé changed (not explaining that the FTSE4Good criteria were weakened) and violations are now isolated occurences, whereas monitoring evidence shows they are systematically produced by Nestlé management systems.

The boycott helps to stop malpractice

The changes in Nestlé policies and practices that have been achieved are attributable to pressure from the boycott and concerted work around the world on monitoring companies against the International Code of Marketing of Breastmilk Substitutes and subsequent, relevant Resolutions of the World Health Assembly and working for legislation to enforce these measure. For example, Nestlé stopped claiming its formula is “The new ‘Gold Standard’ in infant nutrition” as a direct result of our ongoing email Nestlé campaign.

By contrast, Nestlé weakened its own infant formula marketing policy shortly before being included in the FTSE4Good Index, perhaps mindful that FTSE would assess it against its own policies, not against the International Code and Resolutions.

“Church members may, through conscience, wish to support the Nestlé boycott and send a message of solidarity to people in the Philippines who are currently campaigning to stop Nestlé overturning protection for mothers and babies introduced in 2007″.

Nestlé has exploited the Central Finance Board decision to invest

No mention is made of the fact that Nestlé has exploited the decision of the Methodist Church to invest. One Church officer stated at a meeting between Nestlé and the Churches Investment Group in December 2009 his view that: “the Methodist change in policy had been used by the company and misrepresented them”.

Nestlé’s inclusion in the FTSE4Good Index following the weakening of the breastmilk substitutes criteria is also widely exploited by the company, such as in the Creating Shared Value report launched at the Nestlé shareholder meeting in April 2013. See Baby Milk Action’s analysis: Nestlé’s Creative Storytelling Venture.

Concerns in the UK

Nestlé entered the UK market in December 2012 with the completion of its takeover of Pfizer Nutrition/Wyeth and the SMA brand of formula.

More aggressive marketing strategies are now being seen in the UK, including a new mass media advertising campaign and the targeting of health workers. Nestlé is holding events in hotels in an attempt to circumvent the restrictions many health facilities have in place to stop company representatives targeting staff. In these health facilities, companies can only provide information on their products to a designated expert staff member (or a multidisciplinary committee in some regions), who will assess the accuracy and only pass on what is necessary. Baby Milk Action is organising protests outside Nestlé’s events to raise awareness of the conflicts of interest.

Nestlé competes with Danone in many countries and in Baby Milk Action’s view marketing standards in the UK are now also declining as their marketing war reaches the country.