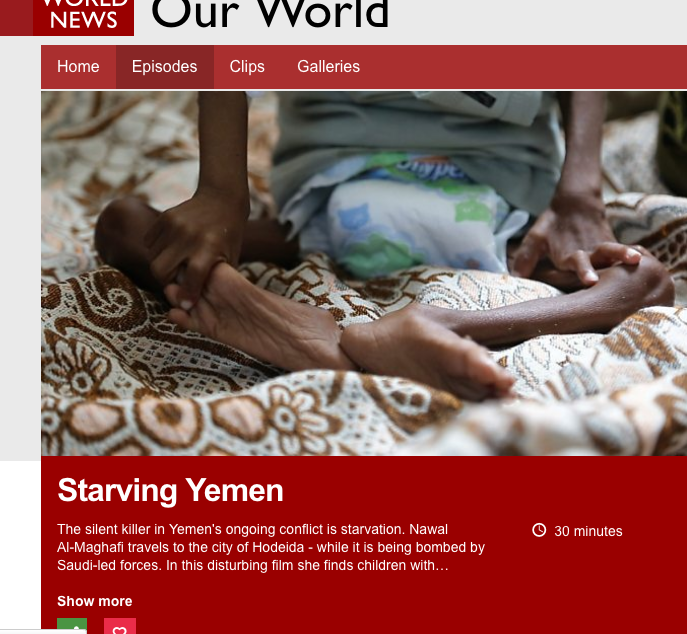 I watched the report on BBC 1 News on Tuesday  20th September – it will be repeated at the weekend). The report  highlighted the terrible situation in the Yemen due to the  bombings and in particular the malnutrition in babies and children.  I was really please that the BBC covered this  – but appalled at the complete lack of understanding about breastfeeding and the risks of bottle feeding in emergency situations.  The clear message was that mothers couldn’t breastfeed if they are malnourished.

Indeed the only bit of ‘good news’ shown was arrival of a large tin of Pediasure that was bottle-fed to an 18 month-old baby with lactose intolerance. Pediasure is a highly sugared and flavoured milk drink for children (1) 2-10 years who are ‘fussy eaters.’  Although Abbott, the manufacturers say that  it can be fed to lactose intolerant children it is not intended for babies under 2 years and does contain lactose.(2)  A specialised infant formula would be safer.

The clear impression given by the report was that imported commercial formula was the solution to the starvation. There was no mention of the risks of formula in the dire circumstances shown.  For more information about the complexities surrounding  infant feeding in emergencies.CLICK HERE.

Friends of the WHO reminded me of the Al Jazeera report from 2014 that gives a bit of background.

The decline in the number of women breastfeeding their babies in Yemen is contributing to the high rates of malnutrition among the country’s children who are under five years old, according to UNICEF representatives in Sanaa.

Yemen’s child malnutrition rates are among the highest in the world. Half of all children under five years are stunted and a further one million are acutely malnourished, according to the World Food Programme’s (WFP) 2014 statistics.

While health experts recommend exclusive breastfeeding for a child up to 6 months of age, Yemen’s most recent demographic health survey showed that only 16 percent of women exclusively breastfed for the first 6 months, with a further 33 percent using a mixture of breastfeeding and a homemade solution of sugar and water.

“Unfortunately, we are one of the less advanced countries in terms of breastfeeding in the region,” Magid al-Gunaid, Yemen’s deputy minister for primary healthcare, told Al Jazeera. “It’s a chronic problem in the country.”

Up to 53 percent of Yemeni women tend to rely on infant formula. However, poor water sanitation, poverty and high illiteracy rates mean that Yemen does not have the social, economic or environmental factors needed for the extensive and safe use of milk substitutes.

“These mothers will make a standard tin of formula, which should last around four days, last for up to two weeks by diluting the product so much that it fails to nourish the child,” said Dr Rajia Sharhan, a nutrition officer for UNICEF in Sanaa. “They just can’t afford to buy it regularly and families are putting themselves in extreme situations to do so.”

Moreover, in a country where 13 million people do not have access to safe water supplies, baby formula is commonly mixed with unclean water and dispensed in unsterilised bottles, often causing the child to become ill.

Milk substitutes are not officially allowed to be sold in Yemen without a doctor’s prescription. However, this law is rarely adhered to as nearly all shops, even in the most rural communities, stock the product. Yet, with 41 percent of Yemeni women being illiterate, many are unable to read the instructions on the packaging to understand the best way to use the product.

Cultural misconceptions are one reason why Yemeni women are turning away from breastfeeding.

Many believe that the first milk a new mother produces is unclean; this is because it is usually a different colour than the milk that emerges a few days after birth. As a result, some women, especially those who do not have access to baby formula, will feed their children a combination of sugar and water, leaving the baby to become increasingly malnourished.

“These rumours get passed on from woman to woman, who tell each other that the initial breast milk is unsanitary,” Sharhan said, “but, we are trying to challenge these beliefs and tell them the milk is not dirty, it is good for the child”.

A lack of confidence in the ability to breastfeed is another reason why Yemeni women are turning away from the practice. “When a woman goes to the doctor, who immediately tells her that she can’t breastfeed, then her confidence is lost and the trust she had in her body is gone. She is left feeling like a failure,” says Sharhan.

Industry experts are concerned that the marketing campaigns of formula companies are playing into women’s insecurity. “It is an underlying factor that undermines women’s confidence in their ability to breastfeed,” says Patti Rundall, the policy director at Baby Milk Action.

“Women see images on formula packaging and think their experience of feeding their child should be just like that, but the idealising language and pictures on the formula tins are ridiculous, because all of the products have a huge risk in comparison to breastfeeding,” Rundall told Al Jazeera.

The debate about how formula companies market their products has been going on for a long time. In 1981, the UN World Health Assembly published an international code to regulate the promotion and sale of baby formula. It states that: “Infant formula labels must contain a statement about the superiority of breastfeeding … and not use pictures or words that idealise the use of infant formula – that, in effect, discourage breastfeeding.”

In 2002, Yemen became one of 37 countries worldwide to turn every recommendation of the code into state law. The only other Middle East/North African (MENA) countries to have done so are Bahrain, Saudi Arabia and Lebanon.

However, many healthcare professionals worry about the implementation of these laws. “Even when there is legislation in place,” says Dr Ghada Sayed, paediatrician and Arab world region coordinator for Baby Milk Action, “it is rarely enforced, there is no monitoring system or governing body that people can complain to”.

Deputy Minister al-Gunaid also commented on the problem: “Our laws on this have been enforced for more than a decade, but unfortunately sometimes not all formula companies adhere to the international code and there is a huge market for them here in Yemen.”

RELATED: ‘Maternal mortality on the decline’

Yemen is one of the poorest countries in the region and as a result, it is particularly vulnerable to accepting incentives from foreign companies.

“This problem is worldwide, but it’s especially prevalent in the Middle East,” says Sayed. “Yemen simply does not have the money to buy new medical equipment, so healthcare workers will accept incentives from baby milk companies, and in turn promote the product to their patients.”

And these incentives come in various forms, says Dr Tony Waterston, of the International Society for Social Pediatrics and Child Health. “Whether from funding of paediatric education and training … to booklets and leaflets given out at discharge … the baby food industry knows exactly how to influence medical practice.”

Sharhan explains that in one hospital, Nestlé, one of the world’s biggest manufacturers of infant formula, had given stethoscopes to the medical staff: “I always find their brochures in every health clinic I go to, but when they gave us these stethoscopes, I could not accept it – I could not put a stethoscope on a child’s chest which had Nestlé written on it. We are not here to promote their products.”

Nestlé told Al Jazeera in a written statement that it “does not give financial or material incentives to health professionals for the purpose of promoting infant formula, ” and that they “comply with both the letter and the spirit of the World Health Organisation’s International Code of Marketing of Breast-Milk Substitutes”.

Advertising campaigns, cultural beliefs, and limited healthcare advice have all contributed to the prevalence of infant formula in Yemen, while creating mistrust towards breastfeeding.

However, actions are being taken to challenge misconceptions and improve child nutrition. The government, supported by UNICEF and the World Food Programme, has established over 1,300 therapeutic feeding centres across the country, where acute malnutrition is treated and women are taught the benefits and importance of breastfeeding.